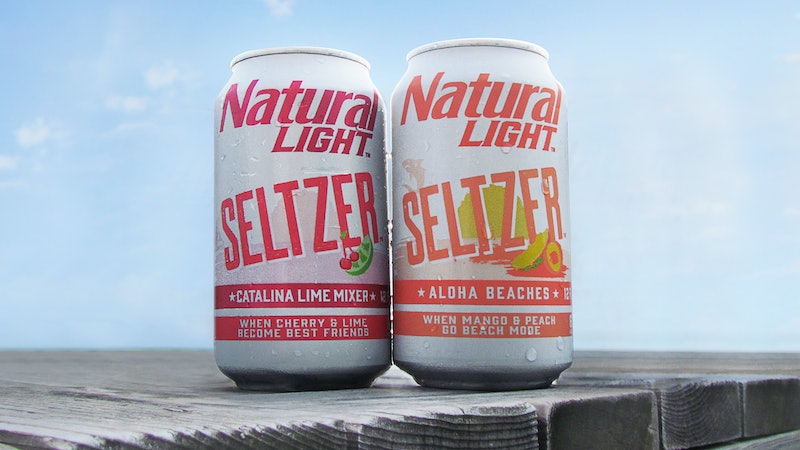 Watch out, hard seltzers — another competitor has just entered the ring: Natty Light just launched its own hard seltzer in two flavors. As Ricardo Marques, Vice President of Core and Value Brands at Natural Light’s parent company, Anheuser-Busch, put it in a press release, “The seltzer category is booming. It’s part of a larger shift in consumption across America and we believe it has tremendous staying power.” As such, it’s only to be expected that Natty Light might enter itself into the race — and if their hard seltzer ends up as popular as the strawberry lemonade-flavored beer they launched earlier this year, then they’re going to be a hard one to beat.

Although hard seltzer is far from new— one brand, SpikedSeltzer, traces its origins back to 2012, according to Slate, while the now-ubiquitous White Claw brand launched in 2016 — 2019 has seen an explosion of popularity for the beverage, with brand after brand rolling out their own take on the fizzy refresher. Lighter than beer and less sweet than wine or many summer cocktails, your typical hard seltzer has just a hint of flavor — typically fruit-tinged — and usually clocks in at 5 or 6% ABV (although a few options offer something a bit boozier). Frequently packaged in cans, it’s also portable, making it excellent for summertime picnics, barbecues, or pool-side or beach-focused shindigs.

Natty Light’s seltzer ticks all of those boxes: It’s packaged in cans, weighs in at 6% ABV, and comes in two fruity flavors. Both flavors, Aloha Beaches and Catalina Lime Mixer, bring to mind a tropical getaway: Aloha Beaches’ primary flavor profile combines mango and peach, while Catalina Lime Mixer brings together black cherry and lime. You’ll be able to get it in 12 packs, 24 packs, and single 25-ounce cans — and Thrillist reports that it’ll cost about 20% less than the average 12-pack, according to Natural Light parent company Anheuser-Busch, making it an affordable option, as well.

That's by design; said Ricardo Marques in the press release, “We know plenty of Natty Light drinkers are also trying seltzer, so we want to meet that demand by bringing the fun of Natty into that space with an affordable price offering that fits their lifestyle.”

Natty’s hard seltzer follows relatively quickly on the heels of the recently-launched “Naturdays” beverage, a sort of shandy-like, strawberry lemonade-flavored beer that hit shelves earlier in 2019. Although Naturdays was initially met with a certain degree of skepticism, it ended up becoming a surprise hit: A lot of people love the stuff. (Naturdays Twitter is one of the most unexpectedly positive Twitter communities I’ve ever seen; hands down my favorite tweet about the drink, though, is this one, which reads, “There is no longer blood in these veins. Just Malört and Naturdays.”)

Will fans embrace Natty Light’s seltzer the same way they did Naturdays? Only time will tell. It’s worth noting, though, that PBR also just launched it’s own seltzer, so Natty Light Seltzer won’t just be competing with already-established hard seltzers; they’re not the only new kid on the block. It’s true that PBR’s variety, called Stronger Seltzer, only comes in one basic flavor — plain ol’ lime — but it does measure in at a whopping 8% ABV. Would you take a higher alcohol content over a more exciting flavor, or the other way around? Only you can answer that question for yourself.

Find out more about Natty Light’s new seltzer at the Natural Light website; you can also find out what places near you carry Natty Light products — both retailers and bars and restaurants — over there. Anyone up for a picnic?