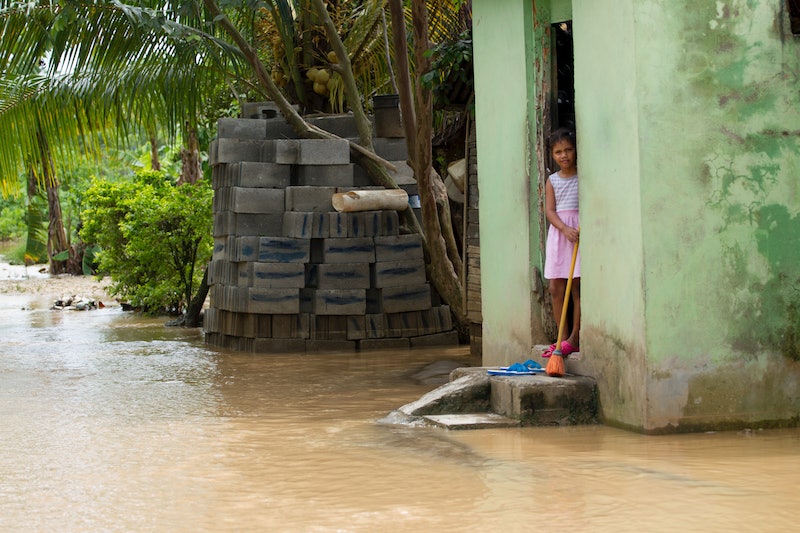 The aftermath of natural disasters is devastating, and it can take years to fully recover from all the damage the storm itself causes. Currently, Puerto Ricans are suffering from the aftereffects of Hurricane Maria, and are struggling to find basic necessities such as food, water, habitable shelter, and power. Though often overlooked due to pressing issues like physical harm and danger, natural disasters also have a serious impact on mental health, and it's not talked about nearly enough. A new University of Miami study seeks to better define and identify post traumatic stress disorder (PTSD) in children who live through natural disasters, which could help create more comprehensive (and hopefully, more successful) mental health treatment options for people who live through a disaster.

The University of Miami study was conducted by Annette M. La Greca, a Professor of Psychology and Pediatrics, and her graduate student BreAnne Danzi. La Greca has studied the psychological impact of natural disasters on children since Hurricane Andrew, the Category 5 storm that ravaged South Miami in 1992. One of the primary goals of the research study was to expand preschool-age PTSD criteria to school-aged children in the DSM-5, the official guide used by psychologists to diagnose patients. The report, published in the International Journal of Clinical and Health Psychology, examined 327 Texas elementary school students who lived through Hurricane Ike in 2008, and found that while the "adult-based" definition of PTSD didn't really apply to children who experienced distress after the hurricane, a "preschool" definition helped identify the children's PTSD. Basically, the study suggests using PTSD criteria designed for younger children may help us diagnose and effectively treat older children before they experience the chronic mental health effects of PTSD.

The research also found while two-thirds of children who live through a natural disaster experience initial psychological distress, those who have increased support from family and friends, as well as fewer stressors, tend to recover on their own from the traumatizing event. “There is no doubt that hurricanes and other extreme weather events can be stressful for children and for adults,” La Greca says, “But as with many stressful experiences, a little extra support can go a long way." In response to their findings, La Greca and her research team developed a workbook entitled After The Storm, a resource for parents who are seeking to positively support their children after a hurricane. The book includes many tips, activities, and coping skills for families trying to navigate trauma post-disaster.

Natural disasters not only negatively affect the mental health of children, but inflict psychological harm in adults who experience the disaster, too. The American Psychiatric Association reports adults not only experience short-term, anxiety-driven responses (i.e., fight, flight, or freeze), but can also develop chronic mental health disorders like PTSD. Natural disasters are also linked to upticks of other traumatic events such as domestic violence, which may trigger PTSD and mental illness in abuse victims. Many studies have found that marginalized people are disproportionately affected by natural disasters, and those who already live with a mental illness or pre-existing disability need significantly more psychological support following a natural disaster.

Despite the increased likelihood of PTSD following natural disasters, most people caught in natural disasters will recover without prolonged mental health issues. Psychologists have also recognized an inverse, but positive consequence natural disasters can have on mental health: post-traumatic growth. This is when folks actually gain confidence, renewed strength, and gratitude towards life following a traumatic event. Additionally, mental health professionals believe people caught in the most recent string of natural disasters will experience far more succinct and successful mental health recovery, thanks to what psychologists learned in the aftermath of Hurricane Katrina. Notably, one of the largest risk factors for developing mental health issues during and after Hurricane Katrina was separation from pets. Responders took that into consideration, and made more concerted efforts this hurricane season to save pets and reduce separation from their owners.