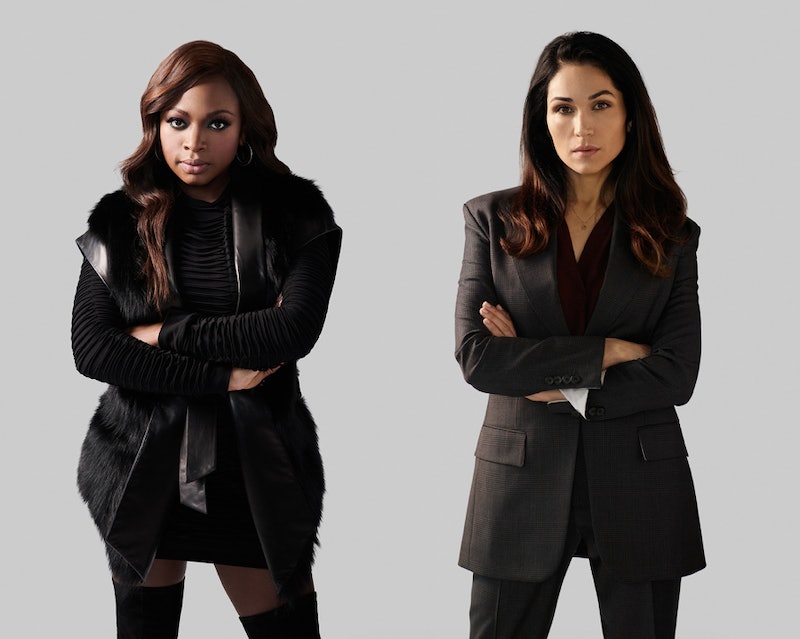 With its charismatic male lead, rollercoaster ride of a plot, quotable one-liners, and DVR-worthy sex scenes, it's easy to assume that Power is just another juicy drama about a "good" family man conflicted about doing "bad" things in which everything predictably falls into place. Over the course of five seasons, the series, created by executive producer Courtney Kemp, has proven to be anything but predictable. But amid the jaw-dropping character deaths and wild details of the drug trade in New York City, there's another welcome surprise, and it comes in the form of Tasha and Angela, Power's two female leads. The two characters, played by Naturi Naughton and Lela Loren, respectively, are unapologetically subverting every trope about female TV characters in a tried and true genre, and pushing the boundaries of what female relationships can look like onscreen.

The series is technically about James St. Patrick, or Ghost (Omari Hardwick), a career drug kingpin and nightclub owner trying to get out of the game, who ends up cheating on his wife, Tasha (Naughton) with his childhood sweetheart Angela (Loren) only to learn that she's now a federal prosecutor investigating his crime syndicate. All of that drama should be more than enough, but it's actually Tasha and Angela, and their complex relationships with him and each other, that has become the draw as Power has developed over five seasons.

Speaking with Bustle ahead of the Season 5 finale, Loren says that she felt lucky to be cast in the role of Angela once she realized how "ambitious" the series was going to be. "It was one of those experiences where you’re like, 'Oh, this isn’t going to be a dry procedural. It's going to push me and stretch me,'" she says. It's also pushed the limits of what a character like Angela usually ends up being on shows like this. Instead of a harried single woman married to her career or a drug dealer's mistress, Angela has a much richer interior life that viewers actually get to explore. Like her relationship with her sister Paz (Elizabeth Rodriguez) and that when she put her career on the line for Ghost, she was most worried — at least judging by how many times she mentioned it — that she wouldn't be able to keep helping with her nephew's school tuition.

The same goes for Tasha. Naughton calls her experience on the Starz summer hit "empowering." But watching Tasha come into her own, Naughton tells Bustle, has been particularly fun. "You know she basically started off as this younger woman using Ghost to give her her identity, and you know, I don’t think she really knew who she was [aside from] a young mom, a drug dealer’s wife," Naughton says.

With everything she's endured — the dissolution of her marriage, her husband in prison, and the devastating death of her teenaged daughter, Raina — viewers have seen this character get more and more layered over time. "She’s not just focusing on keeping the penthouse clean and her hair done and her nails done. Now she’s focusing on saving her children’s lives, and not going to jail... Her evolution as a woman has been really empowering for me to play and to watch. Because she’s starting to come into her own a lot more than she was in Season 1."

Being "well-rounded" is sadly still seen as groundbreaking for female characters on TV, especially for women of color, even though women are complex people, just like their male counterparts. That being said, Tasha and Angela push the envelope even further when it comes to breaking TV stereotypes about women on and offscreen in a few ways.

They're Unapologetic About Their Needs

Both Tasha and Angela's characters have garnered criticism from some segments of fans for being to "career focused" or focused on their own livelihoods. As if that were a bad thing. This is especially true of Angela, who is judged by some fans for being "the other woman." Loren's been "intrigued," she says, by the criticisms of her character. Fans cheer for Ghost and his partner Tommy Egan — who are legit murderers — and dislike her character mostly because she slept with a married man and cares about her job.

"Angela is interesting because all of the characters on Power are incredibly flawed, and so what I found fascinating is sort of the flaws that are allowed or justified and the ones that aren’t," Loren says. "It's incredibly gendered and sexist and it shows where we still are and where we have to grow in our society."

She adds, "You know Tasha, when she finds love with Terry Silver, there were all these recriminations about her stepping out, [too]. You know, there’s no word for "home-wrecker" in the male form." It is telling that Ghost manages to be the hero in all of this, and the affair is either one (or both) of the women's fault, or that a woman would be criticized for moving on after her husband has asked for a divorce.

They Refuse To Fight Over A Man

From the beginning, the affair never involved either woman trying to maliciously take down the other. And things have only gotten more interesting about their relationship. This season, they actually team up to cover for Tasha's son after he shoots someone to avenge his sister's death. Not only are these women not fighting over Ghost, they're going above his head to do what needs to get done. Both Naughton and Loren attribute this unlikely dynamic to Kemp's writing. Naughton says it was refreshing that Tasha didn't have to like Angela to work with her.

"I love that Courtney, as a writer, and all the writers, they empowered these two women not to be having a cat fight every five seconds," Naughton says. "It’s like, 'You know what, I don’t care that you had [an affair with] my husband, right now the bigger issue is [trying to keep everyone out of jail]. Honestly, it’s really about how smart these women are — they are able to put aside their emotions, put aside the affair that Ghost had with Angela, they are able to evolve and decide to achieve a goal to save their lives."

Loren was also excited to see that she wouldn't have to spar with Naughton. "You know, people wanted a very Jerry Springer-type stand off between [Tasha] and Angela and that’s just demeaning to both of these women," she says. "Both of them recognize each others’ intelligence in different ways and they’re both on the same page that Ghost is a little cray-cray this year and you can’t really trust him. There’s a dark humor to this that I really enjoy playing with."

They Refuse To Call Themselves "Ride Or Die Chicks"

Fans are quick to label both women as Ghost's "ride or die chick." Tasha because she's kept his illegal businesses safe, along with his family, and Angela because she's made career sacrifices for him. But both Naughton and Loren are not having it when I ask them about that characterization.

Naughton says that being "ride or die," or supporting your partner, is wonderful. "If they deserve it," she notes. "The problem is, sometimes as women we can be so adamant about standing by our man, making it work that it’s to a fault, and to a point where your life could be ruined, or your children’s lives."

Naughton admits that Tasha was, for awhile, "the epitome of what a ride or die chick" is supposed to be. "But [this season] she’s shedding some of that," Naughton adds, and Tasha is "not about to ride this thing till the wheels fall off."

Loren thinks that the ride or die label is totally "bogus," especially when it comes to Angela and Ghost. "If you’re ride or die but at the expense of your own integrity or self worth, I don't ascribe to that. I don’t think Angela has a loyalty oath [to Ghost] just blindly." She recalls Angela putting him in prison when she thought he was guilty, blowing her career up when she realized he wasn't, and helping Tasha because she felt her pain.

Loren says that in Season 4, "Angela has this really human moment with Tasha, where she sees and feels Tasha’s pain, and it’s that that makes her into a criminal. She’s thinking she’s helping [Tasha] find Tariq, she doesn’t realize that this information could lead to murder." She adds, "That’s why she’s helping, amid her love for Ghost, but also because she’s trying to save her life…. you know people will say “Oh, she’s just trying to save herself,” but everybody is tied together, so if one of them goes down, all of them go down."

Since the series has already been picked up for another season, fans can rest assured that this story is far from over. Although 50 Cent, who is a co-producer on the show and played Kanan, has mentioned wanting Power to end after seven seasons. So how will this all play out? Loren says that "the romantic" in her wants a happy ending for her and Ghost, and everyone getting along at Thanksgivings like one big happy family. Meanwhile, Naughton tells Bustle that she hopes to be the last one standing at the end of it all. It sounds like Tasha and Angela have a lot more to work out, then. But fans should trust that they'll do it in the realest, most badass way possible.