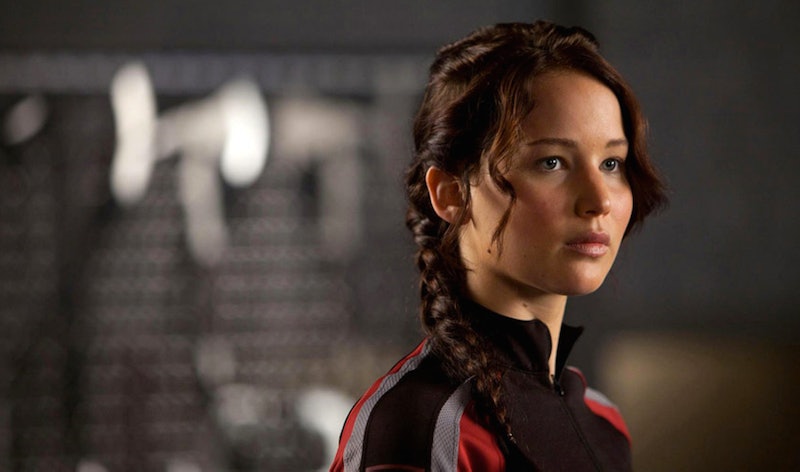 I cannot count the number of times I have used the now ever-present phrase "strong female character," whether it was in casual conversation, an academic paper, or a published piece of writing, including some on this very site. I even made an argument for why young male readers need books about strong female characters, but I am declaring myself officially done with the phrase. We need to stop using the term Strong Female Character, because women and girls deserve a smarter conversation than that.

Over the last few years, these three words strung together — Strong Female Character — have become convenient packaging for any girl or woman in literature who is presented to readers as anything other than a typical damsel-in-distress or supporting love interest. From Katniss Everdeen to Claire Fraser to Alina Starkov, incredible female book characters have been continually stuffed into this very narrow box labeled "strong," and put on a pedestal to be praised by everyone, from critics to consumers to authors, for breaking literary boundaries. While the increased representation of fully-fleshed female characters in books is something to applaud, and something to continue to strive towards, the way we talk about them is something we need to reconsider.

There is an infinite number of things girls and women can be, which, yes, includes "strong," but we have called this one characteristic out as being the end all, be all of our ideal female characters. When we raise it up and praise it as being groundbreaking or outside the norm, we are reinforcing the idea that women are, in general, the weaker sex, and when they display strength of any kind, whether it be emotional, physical, mental, or otherwise, they are exceptional. By using the words "strong" and "female" in succession to modify the term character, we are perpetuating the sexist belief that women are naturally weak. How often do you see the phrase "strong male character?" You probably never have, because it is implied that all men, unlike women, are strong, so are instead called out when they are sensitive or compassionate or shy, all "less than" traits that are often associated with the female sex.

I am not arguing that strong female characters don't exist, nor am I trying to convince anyone that when they do, they are a bad thing. What I am trying to say is that the label Strong Female Character isn't, and shouldn't be, the only option. Women and girls deserve to see the unlimited possibilities of their gender, from the quick and cunning to the steadfast and studious to the brave and daring. We also deserve to be able to talk about those possibilities without being confined to a narrow set of expectations for what a "good" female character should be called.

Jane Austen has written inspiring heroines young women have gravitated to for over 200 years, but is Elizabeth Bennet really a strong female character, as she is so commonly referred to in modern conversations about her role as a feminist figure in literature, or is she just more fully fleshed out than so many other leading ladies? She is smart and independent, selfless and compassionate, stubborn and steadfast for sure, but strong doesn't seem to fit into her actual behavioral characteristics. Sure, she shows emotional maturity and strength for her family throughout the novel, but by limiting her description to a typical Strong Female Character, we're stunting any conversations about the complex nature of her character, the pros and cons of other traits, and the many meanings of strength itself.

The term Strong Female Character has become an umbrella under which all well-written female characters fall, a placeholder for when we mean a female character is fully developed, complex, multi-dimensional. When we say Strong Female Character, what we really mean is someone who is more than a love interest, more than a plot device to move along a male character's story, more than just a one-dimensional sketch of what a girl or woman is assumed to be. We mean a complicated character with many different strengths and her own set of weaknesses, someone with complex motivations and real character development.

It's time we stop settling for Strong Female Characters, and start demanding what we actually want: more heroines in literature. Readers deserve full-fleshed out, diverse, and relatable female characters who are so much more than "strong," whatever that means. Instead of demanding strength from the girls and women in our books, we should expect complexity. Realness. Kindness. Drive. Ambition. We should expect them to have healthy relationships with other women, real-life flaws we can relate to, and complicated story lines that don't revolve around men. Let's require equal representation in books, so that all kinds of women are showcased, so all narratives are explored, not just the strong ones.

It's about time we bury Strong Female Characters, once and for all, because women are so much more than that.