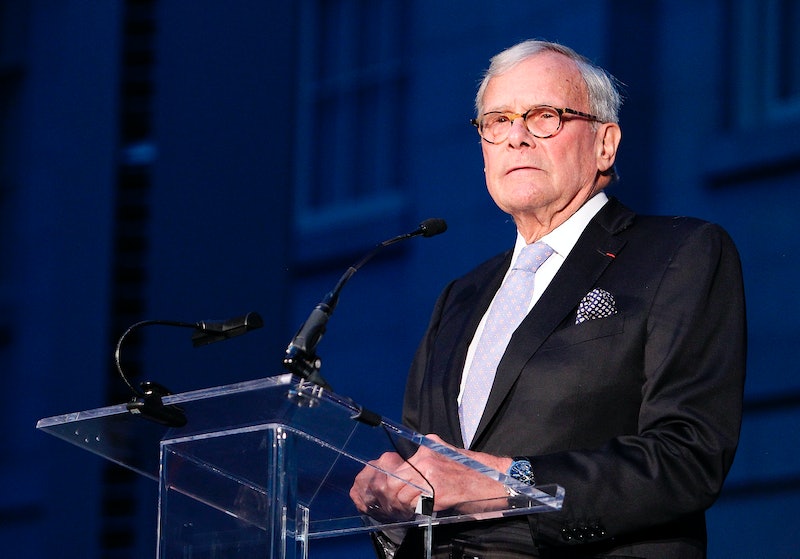 Tom Brokaw is one of television's most respected figures — but that reputation didn't protect him from getting into some hot water on Sunday. NBC's Tom Brokaw said Hispanics should work harder to assimilate — and it provoked an immediate backlash on Twitter and elsewhere, and led Brokaw himself to quickly apologize for his words.

In a television appearance on Sunday, Brokaw was discussing how he believed Republicans were uncomfortable with Hispanic immigration into the United States, according to The Hill.

"On the Republican side, a lot of people see the rise of an extraordinary, important, new constituent in American politics, Hispanics, who will come here and all be Democrats," Brokaw said.

"It’s the intermarriage that is going on and the cultures that are conflicting with each other. I also happen to believe that the Hispanics should work harder at assimilation,” Brokaw said in an interview on NBC's Meet the Press. “That’s one of the things I’ve been saying for a long time."

Brokaw went on to mention language as one way that Hispanic communities could assimilate more.

"You know, they ought not to be just codified in their communities but make sure that all their kids are learning to speak English, and that they feel comfortable in the communities," he said. "And that’s going to take outreach on both sides, frankly.”

PBS' Yamiche Alcindor, who was on the Meet the Press panel with Brokaw, quickly challenged his comments, as Politico noted.

“I would just say that we also need to adjust what we think of as America. You’re talking about assimilation. I grew up in Miami, where people speak Spanish, but their kids speak English,” she said to Brokaw. “And the idea that we think Americans can only speak English, as if Spanish and other languages wasn’t always part of America, is, in some ways, troubling.”

Alcindor's comments were tame compared to some of the anger his words met on Twitter. Texas Democratic Rep. Joaquin Castro — whose brother Julián Castro is running for president — offered some particularly strong words.

"@tombrokaw, for a celebrated @NBCNews journalist who spent years chronicling American society you seem stunningly ignorant of the Hispanic community in this country," Castro tweeted on on Sunday. "Unfortunate to see xenophobia pass for elevated political commentary."

Castro then followed up with a thread about the history of forced Hispanic assimilation in America.

"All of this (and more) leads to a kind of self-hatred," Castro wrote to end his Twitter thread. "In the neighborhoods where I grew up kids used to deride each other as 'wetbacks' or 'mojados,' an ethnic slurs against Mexicans."

In response to the outcry against his comments, Brokaw offered an apology in a series of tweets.

"I feel terrible a part of my comments on Hispanics offended some members of that proud culture," he wrote first. Later, he added additional apologies for having expressed that sentiment.

"Finally, I am sorry - I never intended to disparage any segment of our rich, diverse society which defines who we are," Brokaw tweeted on Sunday evening. "Finally, I am sorry I failed to convey my strong belief that diversity - dynamic and inclusive is what makes America."