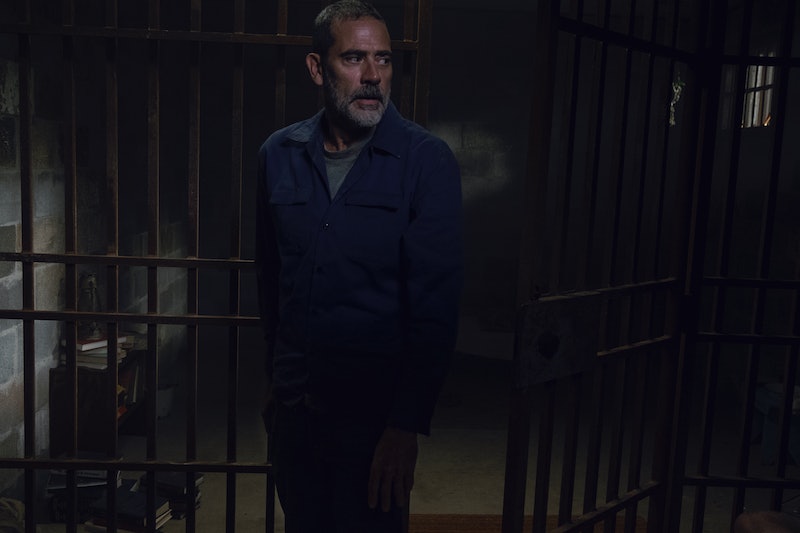 There was a lot to unpack from The Walking Dead Season 9 midseason finale, but one of the most shocking twists of all was watching as Negan stepped out of his unlocked prison cell and marveling at his own good fortune. Did Father Gabriel mean to leave that door open or was he simply too distracted by his own personal drama to notice? Either way, Negan's escape from jail on The Walking Dead is a huge deal, especially since it's something that doesn't happen until way later in the comics. However, before you start worrying about what kind of mayhem he may cause for the residents of Alexandria, it's important to note that his next move may not be what you think.

Those familiar with The Walking Dead comics — which is where the series gets a good chunk of its source material — know that Negan doesn't stay free for very long. He uses the moment as an opportunity to show Rick some loyalty in an attempt to start building trust between the two of them. Of course, given Andrew Lincoln's departure from the show, if Negan does end up turning himself back in, it won't be to Rick but rather someone else. (Maybe Father Gabriel?Judith?) In that case, this little excursion won't amount to much, but could serve as the beginning of a possible Negan redemption arc. His reign of terror has lasted a long time, so it's possible his time in confinement has him rethinking how he wants to spend the rest of his life. Hey, people can change.

That being said, this isn't the only time Negan has a chance to escape in the comics, so there's a chance the series is skipping directly to that plot point instead. In that case, odds are Negan will find himself coming face-to-face with the Whisperers' leader Alpha, who will be introduced during the second half of Season 9, as per Entertainment Weekly.

Considering how formidable the Whisperers are already proving to be, the idea of Negan joining their ranks doesn't bode well for our core characters. Then again, Negan never does what's expected of him and if his storyline stays true to the comics, it's likely that his eventual affiliation with the newest threat may yield surprising results. He could also join forces with his former captors and help them fight the Whisperers — which would be a good thing.

Granted, it's also just as possible that Negan's next move will be something completely different and have nothing to do with what happens to his comic book counterpart. Maybe he remains hidden in Alexandria, spying on everything that happens — waiting for an opportunity that could benefit him best. Perhaps he'll go off and try to find Rick, refusing to believe that he's dead. Or maybe he runs off and joins the circus. (Just kidding, those probably don't exist anymore in this world.)

Either way, there are a lot of ways this storyline could play out, so it's best to go into the rest of this season with an open mind. Yes, Negan's no longer behind bars, but that could change in an instant — or it could result in even more deaths. Only time will tell how Negan chooses to use his newfound freedom, for better or for worse.