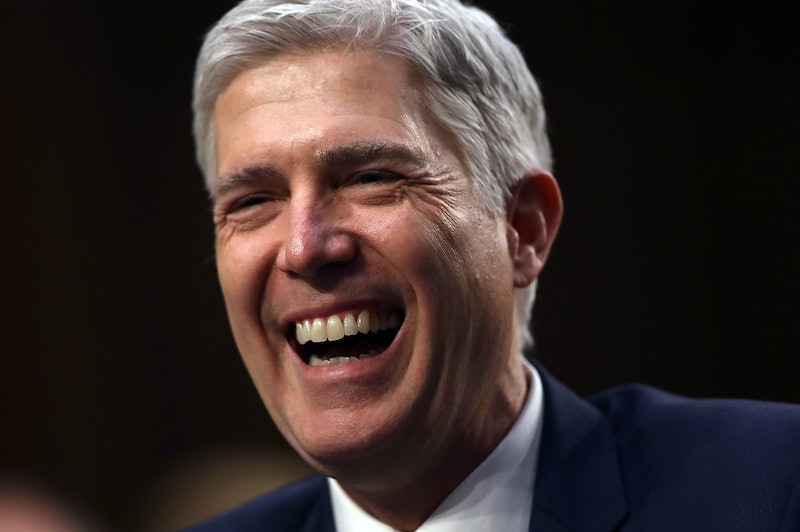 Call it a Freudian slip or an honest mistake: Supreme Court nominee Neil Gorsuch on Wednesday hilariously paid homage to the man who nominated him. During his confirmation hearing before the Senate Judiciary Committee, Gorsuch said "bigly," a made-up-sounding word that became notorious thanks to President Trump's pronunciation of the phrase "big league" during his presidential campaign. Like Trump's own similar incidents, Gorsuch's "bigly" moment inspired memes and tweets almost as funny as the gaffe itself.

Gorsuch slipped up in perhaps the most stately way one can — as he was referencing John Hancock's signature on the Declaration of Independence:

Believe it or not, bigly is a word. Still, it didn't sound any more real when Gorsuch said it on Wednesday than when Trump seemed to say it during his campaign. Real or fake, the word helped to lighten the mood during Gorsuch's hearing, which reached its third day on Wednesday. Even Gorsuch himself seemed to have a sense of humor about the whole thing. Who knows, he could even find the jokes he inspired laughable.

That is the face of a man who thinks the word "bigly" is just as ridiculous as you do.

Sen. Ben Sasse reportedly won $5 on a bet when Gorsuch slipped up.

Well, that's one way to get through a never-ending Senate hearing.

Brought Down The House

Dave is not wrong.

I wonder how much money Sasse wins if Gorsuch says "yuge."

Gorsuch still hasn't been confirmed as a Supreme Court justice. Like most of the president's nominations, Gorsuch remains controversial in the eyes of many Democrats. Even still, the Republicans' majority means that they can nominate him bigly on their own.