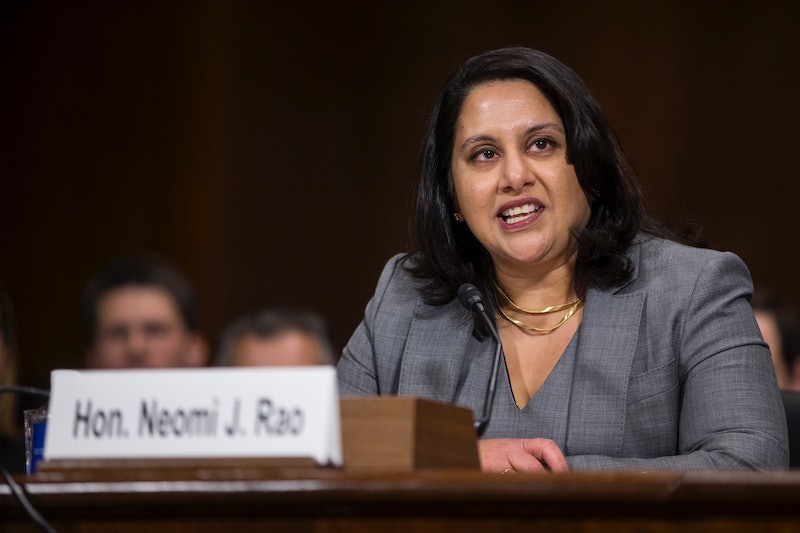 When Justice Brett Kavanaugh was sworn in as a Supreme Court justice — despite fierce opposition during his nomination hearings — a seat opened up on the second highest court in the land. President Donald Trump's choice to fill that position was in the hot seat on Tuesday during her confirmation hearing, when Republican Sen. Jodi Ernst questioned Neomi Rao on her sexual assault and feminism writings from college.

Rao, who currently heads the White House's Office of Information and Regulatory Affairs, once wrote while at Yale that when a woman "drinks to the point where she can no longer choose, well, getting to that point was part of her choice." BuzzFeed News reported in January that during college she wrote critically of feminism, racial justice, and LGBTQ rights.

Rao would be joining the D.C. Circuit Court of Appeals, which oversees many of the cases involving "independent federal regulatory agencies," The Washington Post reports. While introducing her line of questioning, Ernst said that whoever fills the seat not only needs to be prepared for cases about "federal administrative law," but "also needs to share the same values and morals as any other judge."

Ernst, saying she wasn't going to "mince words," continued: "I've had a chance to review a number of your writings while you were in college, and they do give me pause. Not just from my own personal experiences, but regarding a message we send young women everywhere," Ersnt said. Her first question was, "Do you believe rape is wrong?"

Rao responded, "Absolutely, it's a horrific crime." After more questioning from Ernst, she went on to say that "of course" the person at fault in a rape is "the rapist, the man who commits the rape."

"Is that a 'dangerous feminist ideal' that women are created equal?" Ernst then asked, quoting from some of Rao's college writing.

"Senator, I very much regret that statement and I've always believed strongly in the equality of women and men." Rao said, "I'm honestly not sure why I wrote that in college.

At another point in her testimony, Rao responded again to questions about her writings, this time from Senate Judiciary Chairman Lindsey Graham. "To be honest looking back at some of those writing and rereading them, I cringe at some of the language that I used," Rao told Graham. "I think I was responding to things that were happening on campus at that time and in the intervening two decades. I like to think that I have matured as a thinker and a writer and indeed as a person."

Ernst explained in her introduction how important the issue was to her and all Americans. "I've said time and time again that we need to change the culture around sexual violence — from our college campuses, to the U.S. Olympic Committee, to our military, and beyond," Ernst told Rao. "A large part of this is ensuring that young women feel comfortable sharing the stories and experiences that they've endured and that they are given a chance to be heard." Ernst told Bloomberg News in January that she was raped in college while in an abusive relationship.

Rao also came under criticism for not saying she would recuse herself from all cases regarding Trump administration regulations. Instead she said she would do so on a "case by case" basis.