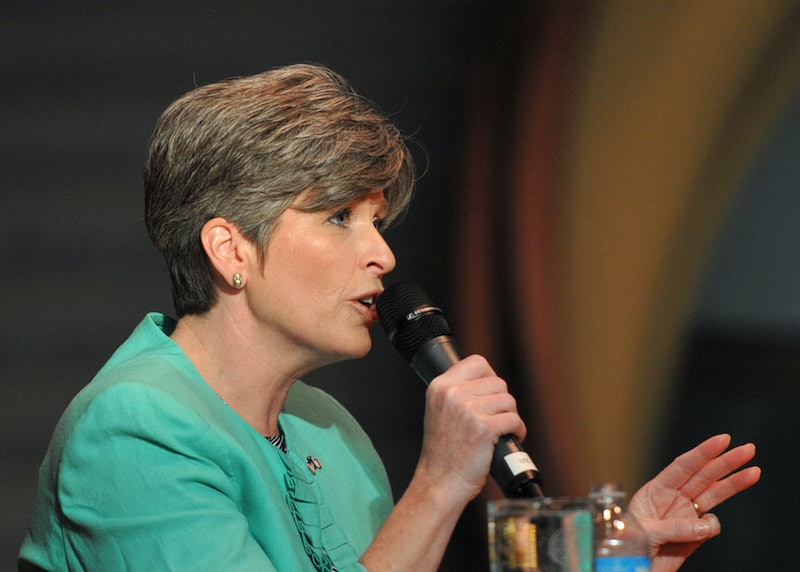 Earlier this month, Iowa Sen. Jodi Ernst's divorce from her husband was finalized. Per Iowa state law, both of their affidavits were made public, and in hers, Ernst alleged that her ex-husband physically assaulted her. (An attorney for Gail Ernst told Bloomberg News that his client "is declining to make any statements" at this time; Bustle has reached out to the attorney's office for comment.) In an interview with Bloomberg News following reports about her divorce, Ernst disclosed that she was raped in college by someone she knew, noting that she was not prepared to share her story when the #MeToo movement was first revived.

“I didn’t want to share it with anybody, and in the era of hashtag-MeToo survivors, I always believed that every person is different and they will confront their demons when they’re ready,” Ernst told Bloomberg News this week. “And I was not ready.”

In her interview with Bloomberg News, Ernst said that she was in a relationship with someone who "was physically and sexually abusive" when she was a student at Iowa State University. Ernst alleged that he raped her at his home one night, and then threatened to kill himself if she ended the relationship. She did not report the assault to the police, she said, but she did call the campus sexual assault counseling center’s hotline and subsequently end the relationship. Ernst later volunteered at that same counseling center without disclosing her previous contact with it.

“I was embarrassed,” she told Bloomberg News. “I didn’t know how to explain it. I was so humiliated. And I’m a private person, when it comes to those things.”

According to The Des Moines Register, Ernst is an ally of President Donald Trump, and reportedly turned him down after being interviewed as a potential vice presidential candidate. Ernst told Bloomberg News that her support of Trump — who has been accused of sexual misconduct by multiple women, though he has denied these allegations — was distinct from her own experiences.

“It’s outrageous to suggest that anyone who has been the victim of sexual assault should therefore be a Hillary Clinton supporter,” Ernst told Bloomberg News.

Ernst has also faced criticism when she voted in favor of confirming Brett Kavanaugh to the Supreme Court. Kavanaugh faced allegations of sexual misconduct from multiple women, including Christine Blasey Ford, who testified during Kavanaugh's confirmation process. Kavanaugh denied all of the allegations, per The Washington Post.

“I do believe [Ford] experienced trauma, but the evidence and witnesses presented by her contradicted her story,” Ernst told Bloomberg News. “I don’t believe Justice Kavanaugh was the source of her trauma.”

Although Ernst has faced backlash for some of her political choices on this issue, The Des Moines Register reported that she has spent much of her career advocating for survivors of sexual assault. She penned an op-ed back in 2016 to highlight sexual assault in the military, and was part of a bipartisan group of senators who called for an investigation into USA Gymnastics following abuse charges filed against former team doctor Larry Nassar.

Bloomberg News reported that Ernst is currently running for re-election in a state that has seen recent Democratic victories — putting the Republican senator in a potentially vulnerable position — but she has indicated that recent reports about her marriage and divorce will not hinder her.

“I’m seeking re-election," Ernst told Bloomberg News. "I’m going to do it as a single woman. What I can do is be honest about what happened. And I can move forward. The problem is now I’ve been outed when I was not ready to talk about it. But now maybe it forces me to talk about it.”

If she wins reelection in 2020, Ernst will begin a second six-year term in the Senate.