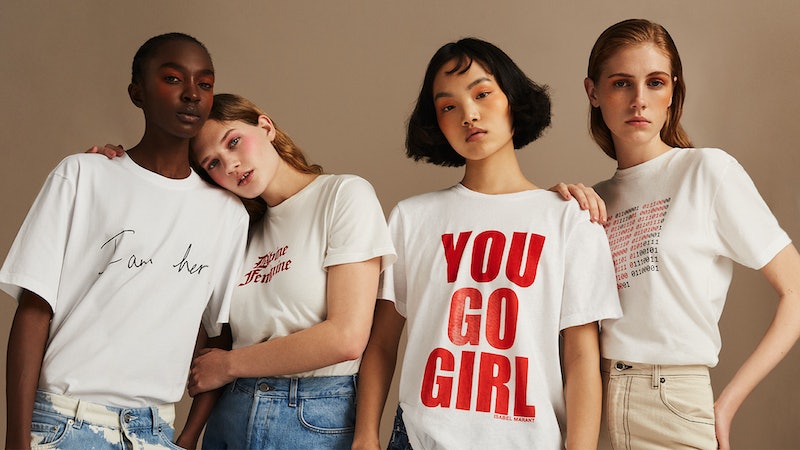 Victoria Beckham, Isabel Marant, Rosie Assoulin, and Alexa Chung agreed to take part in the campaign along with female-owned brands Ellery and Perfect Moment. Each designer came up with a simple yet powerful slogan that, to them, embodied the concept of female empowerment. Prices range from £85 for Alexa Chung's design up to £200 for Ellery's tee.

Women for Women International is a non-profit organisation that helps women living in countries torn apart by war. Since 1993, the organisation has helped half a million women rebuild their lives, putting them on a one-year training course that teaches about rights, health, and vocational skills.

In 2018, Net-a-Porter asked a different batch of designers to lend a hand to the cause. The T-shirts that were produced made enough money to support more than 170 women over the course of the year.

“Women in our programme have experienced unimaginable trauma but Net-a-Porter's support reminds the women we work with that they are not alone or forgotten," said Brita Fernandez Schmidt, executive director of Women for Women International, in a statement. "Through this campaign and the vital funds raised, Net-a-Porter, along with six inspiring female designers, are helping to transform the lives not only of the women we work with but also their entire communities."

Beckham's design simply reads "I am her" and features the designer's signature on the back. It aims to unite women everywhere, to remind people that they are one and the same, and to encourage people to show compassion towards the experiences of others. “Generally, I think we could all start by being a little kinder to one another. Everyone has a duty to support women in finding their voice and surely kindness is a good place to start," Beckham told Vogue.

Chung's is a little bolder. "Divine feminine" is plastered across the front in red velvet, symbolising strength, intuition, and empathy.

Red was also the favoured colour for Isabel Marant who wants to encourage and uplift women with her "you go girl" slogan.

Assoulin chose to render a heart out of binary code. Put together, the numbers translate to "Happy International Women's Day." On Instagram, the designer said she wanted to promote "tech coding literacy and education among young girls and women and give them complete and equal opportunities for success."

Perfect Moment's tee is all about power, swapping the "o" out for a rainbow-hued star that aims to send a sign of unity and positivity.

Last but not least is Ellery's design. On the front, it reads all the terms used to describe a girl or woman, ending with "the future is female." And on the back is a charging unicorn, because what else?

All of the T-shirts are available in XS to L which should fit any size from a UK 6 to 14. If there's one thing to wear this International Women's Day, this is it.