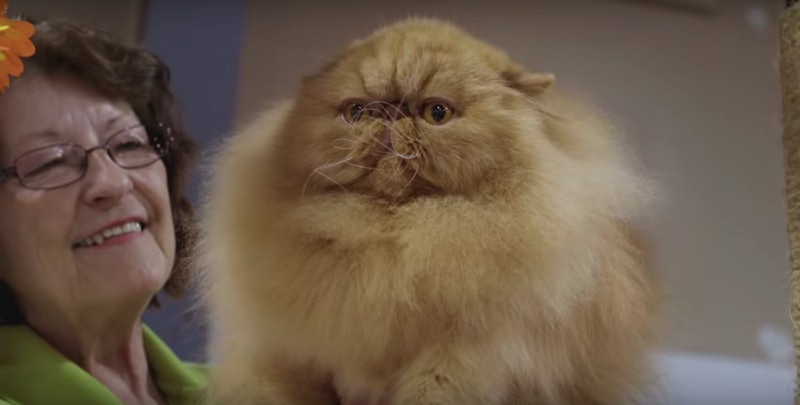 These cats are definitely not here to make friends. The new Netflix documentary Catwalk takes a closer look at the competitive cat show circuit. And while this might all sound very Best In Show and good for a laugh, these fancy felines have a lot of heart. And now that you're done watching Bird Box or YOU, it's time to make this new documentary your next Netflix obsession.

Catwalk: Tales From The Cat Show Circuit, streaming now, follows these cats and their owners as they compete to be named Canada's top cat. Not for money, but for bragging rights. "People can grasp the concept of a dog show," one owner says in the Catwalk trailer. "They can not even wrap their heads around a cat show."

Honestly, after watching this, some still might not get why people will dress their cats up in coffee filter collars just to win a cat beauty contest. They might not understand how a cat show could be so cutthroat since, as one owner says, "If you're not No. 1, you're the first loser." But, that doesn't mean they won't love every moment of this documentary that covers the highs, the lows, and the catastrophic defeats of cat-centric competition.

Already, Twitter has found a lot of enjoyment from the documentary. Specifically, falling in love with one feline competitor Oh La La, the mysterious red Persian that gives the judges goosebumps.

Her grooming routine alone would make Queer Eye's Jonathan Van Ness proud. Not to mention, could make for some pretty good ASMR content. "If this was my cat I would laugh at it everyday as much as I loved it," a fan named @brassyn tweeted. "The scene where it got blow-dried was a particular joy."

Others just can't believe they've been gifted such a gift from the Netflix gods. Seriously, this documentary has everything: ill-timed hairballs, Bach-loving white fluffballs, and some real suspect pumpkin ginger bread.

"Not to be dramatic," Twitter user @pitybat wrote, "but Catwalk on Netflix is the best thing I’ve ever watched and I need 50000 more hours of it."

Meanwhile, some Catwalk fans think everyone's been obsessed with the wrong documentary on Netflix. "DO NOT TALK TO ME ABOUT THE FYRE DOCS UNTIL YOU'VE WATCHED CATWALK: TALES FROM THE CAT SHOW CIRCUIT," a tweeted writer and cat-fan Alison Agosti in all-caps just to make sure you hear her.

But, the great thing is, you can watch both and make it a double feature. The weird world of Netflix docs is definitely one to explore since it includes more than just true crime. Shocking, right? (And if you want more animal content? Check out Blue Planet II.)

Or, if you want to see the behind-the-scenes of another cat-lover, watch Taylor Swift's Reputation tour doc. And yes, you could also see the sad sandwich that is Netflix's Fyre, which will show you how the Fyre Festival turned into a dumpster fire. It's also the place to check out a purrfectly wholesome doc like Catwalk, which is clearly taking the internet by storm.