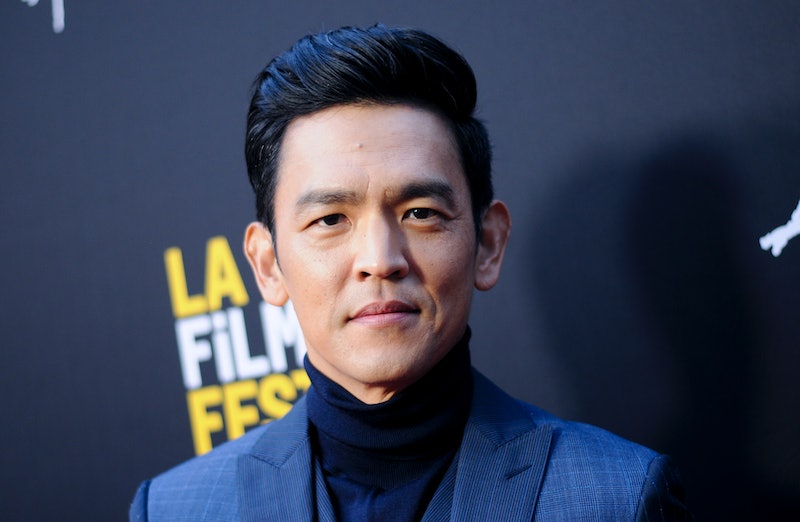 Anime fans — and anyone who loves a good space opera — received some good news from Netflix today. The streamer announced that John Cho will lead the live-action Cowboy Bebop as Spike Spiegel. And if that's not flawless casting then nothing is. Cho is fresh off a trip to CBS All Access' The Twilight Zone, as well as the starring role in the critically-acclaimed indie Searching — but those are just the most recent credits on the fan favorite Star Trek actor's résumé. The 46-year-old is long overdue to headline a series, and given his ability to seamlessly switch between making viewers laugh and breaking their hearts, he's particularly well-suited to play the uber cool Spike.

To celebrate the announcement, Cho's friends Constance Wu, Sandra Oh, Ken Jeong, and Harry Shum Jr. shared a video of them finding out the news. Wu wrote, "Just found this video in my text convo with @johnthecho thought maybe it was too drunky to post but then I was like eh, why the f*ck not? WE LOVE YOU John!! So psyched to see you as Spike!#cowboybebop @iamsandraohinsta @kenjeong @jonmchu @harryshumjr @pangeerz."

For the uninitiated, Cowboy Bebop is a beloved 1997 Japanese anime set in a future where Earth has become uninhabitable leading to space colonization. Unfortunately, there's also been a rise in crime, leading to the Inter Solar System Police hiring bounty hunters (known as cowboys) to bring in criminals for a reward. Spike and his crew of misfits on the Bebop are cowboys who are always looking for their next target.

Spike is the leader of the crew, and Netflix describes him as "an impossibly cool 'cowboy' (bounty hunter) with a deadly smile, a wry wit, and style to spare. He travels the solar system with his ex-cop partner, Jet, pursuing the future’s most dangerous bounties with a combination of charm, charisma — and deadly Jeet Kune Do." He's also nursing a broken heart after his girlfriend was murdered by his former best friend turned arch nemesis, Vicious.

In addition to Cho, Netflix also announced Mustafa Shakir, Daniella Pineda, and Alex Hassell have joined the cast. Shakir is playing the Bebop's captain, Jet Black, a jazz-loving former cop who lost everything he held dear after a betrayal. Meanwhile, Pineda will play Faye Valentine a "bold, brash and unpredictable bounty hunter" suffering from amnesia. Finally, Hassell is taking on the role of Spike's former best friend, Viscous, a hitman who works for the shady Syndicate.

There should be more casting announcements to come because two of the anime's best characters have yet to be cast. The feisty Edward Wong, a young girl with mad hacker skills, is a breakout in the original, and then there's Ein, a genetically-engineered Corgi with human intelligence. Both characters are essential to the crew, so they'll likely be announced at a later date.

For now, the announcement that Cho's playing Spike is a major win for fans, who have been waiting for the live-action Cowboy Bebop to come to fruition. It's unclear when the 10-episode first season will premiere on Netflix, but with such an incredible cast in place, you can bet the series will be worth the wait.