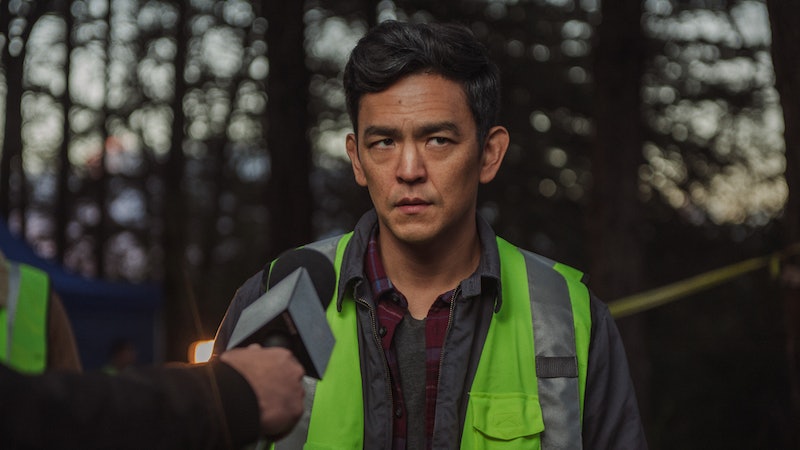 John Cho is arguably the most recognizable and well known Asian American movie star. He's been working steadily for the past two decades, eventually becoming a household name with 2004's Harold & Kumar Go to White Castle. It's a level of fame he's held steady with roles on various TV shows and by playing Sulu in the rebooted Star Trek movie franchise. And, after years of being known as a stoner or a literal spaceship driver, thanks to the surprise indie hit Searching, John Cho is finally getting to be recognized as something else: a dad.

Cho, who is a father in real life, has only recently begun to get cast in dad roles. "I guess it means I'm old," Cho says with a laugh during an early November phone call. But, on a more serious note, the actor says, playing a parent makes a thriller like Searching all the more compelling. "There's a sort of gravity to playing the dad that's fun. It's the highest stakes imaginable." And in Searching, the stakes are pretty high.

The movie is about a father David, played by Cho, desperately searching for his teenage daughter Margot (Michelle La) after she goes missing, only to find that he didn't really know what his daughter was doing in her free time. And while the film, which takes place entirely on screens, had plenty of acting challenges for Cho, acting as a father was not one of them. "My primary relationship now is with my wife, but I think in terms of what defines me as a person, it's that parent-child relationship," he says.

It was easy, then, for Cho to identify with David in Searching, which was written by director Aneesh Chaganty and Sev Ohanian. But looking back, Cho is still grappling with how the theme of fatherhood, and Asian American fatherhood in particular, is explored in the film. During production, he recounts, he didn't concern himself with the responsibility of representing Asian fatherhood on screen. "I was more focusing on it being specific. So, I was trying to draw from my own life, and sort of be who I was as a dad as much as possible," he says. However, he adds, "I don't have any experience being non-Asian and a dad. ...[I was] leaning into my own specificity, if that's a political act at all."

The reason Cho mentions a "political act" is likely to do with the fact that, over years, as one of the only Asian American movie stars in Hollywood, Cho has become somewhat of a marker for Asian representation on screen. In 2016, after a few high profile examples of whitewashing of Asian characters (Scarlett Johansson in Ghost in the Shell, Emma Stone in Aloha), William Yu launched the #StarringJohnCho movement on Twitter to call on Hollywood to cast more Asians in lead roles. Cho himself, however, has felt a bit uncomfortable at the idea of being the sort of symbol of Asian American actors. "I try to burn as few calories thinking about that as possible," he told GQ in August while promoting Searching's theatrical release.

That said, he has spent some time recently thinking about the image of Asian fatherhood Searching presents. "It's interesting, I'm sort of working through all that myself," he says. "On the one hand, I feel like it's very non-Asian because it's so much more expressive," he continues, speaking specifically about David's parenting style, which is attentive, but doesn't include telling his daughter explicitly that he loves her. "But that's maybe a stereotype that I've maybe believed in and that is not real, you know? On the other hand, I really feel like it's very specifically Asian."

"It's this idea of universal and specific," he says. "You get to the universal by being specific, and I don't even know what we did, we just tried to make something that felt authentic." Cho, who recently traveled to South Korea to promote Searching, isn't quite sure what the movie is saying about Asian fathers, if, in fact, it's saying anything about it at all, but he's accepting all the interpretations and readings of the film as they come. "It's hard for me to say whether it's Asian or not, but I kind of like the fact that we land there," he concludes. "That's a good place to be."

Cho has had plenty of time to think about and experience the impact of Searching on audiences. He's been promoting the film for almost a year, since it's premiere at the 2018 Sundance Film Festival in January. And he'll likely be talking about it a little while longer — Cho was recently nominated for an Independent Spirit Award for Best Male Lead, and the film is now out on digital and coming to Blu-Ray on Nov. 27. To quote a thoughtful and talented actor, "That's a good place to be."