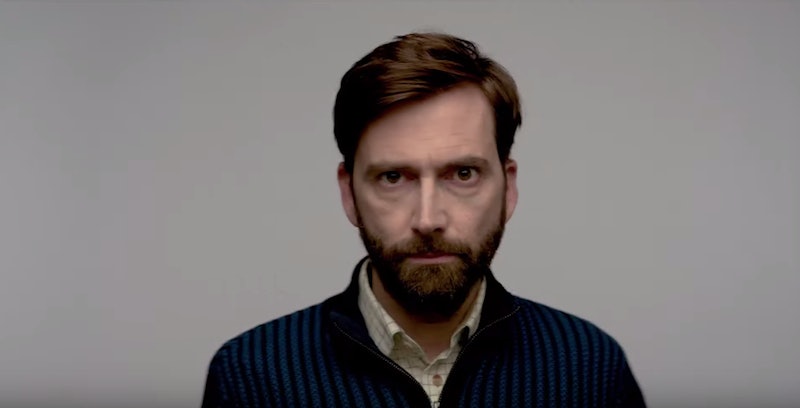 Everyone loves a good crime series, and now, thanks to David Tennant and Haley Atwell's new Netflix crime drama, Criminal, it seems the world will have one more streaming obsession on their hands in the coming months. However, this original anthology series is like nothing you've ever seen before with all 12 episodes taking place within the confines of police interrogation rooms set in four different countries (France, Germany, Spain, and the U.K.) as a range of intriguing crime stories are unraveled. A total of three episodes will be spent within each country.

Another unique aspect of the series, as reported by Entertainment Weekly, is the fact that the episodes will be produced in each country's native language. Tennant and Atwell will obviously star in the U.K. stories, which means their time on screen will be limited and won't span over the course of the entire season. But don't let that keep you from watching all of the other stories as well. Tennant and Atwell may be the big headliners right now, helping to draw perspective viewers in, but you don't need big Hollywood names to keep crime thrillers interesting. They tend to be pretty addictive all by themselves. The teaser alone leaves plenty of mystery to leave you wanting more.

As of now, Netflix has yet to announce an official release date for the new series. The end of the teaser remains cryptic, only to say that it will be "Coming This Autumn," which presumably means sometime in the fall, potentially around September or October. Given that summer has only just begun, this seems much too far away for comfort, though it does give us all something to look forward to once the warm weather starts to turn.

The clip is brief and shows Tennant, Atwell, and several others getting their mug shots taken and looking very grim indeed. Nothing is mentioned about how these people came to be arrested or what they did to prompt an interrogation, but based solely on the hollowed expressions on their faces these folks are not to be trifled with in any way, shape, or form.

Tennant has certainly been making the TV rounds as of late, having first starred as the Doctor in Doctor Who for three seasons. Since then he also served as Kilgrave, the big bad in Netflix's Jessica Jones Marvel series, and just recently he worked alongside Michael Sheen in the Amazon Prime series Good Omens. Meanwhile, Atwell has also been just as busy, having served as Peggy Carter in the Marvel franchise as well as the ABC series Agent Carter. Additionally, she starred in the Starz series Howards End and appeared in an episode of Black Mirror.

Needless to say, these two are no strangers to the small screen and are sure to make their Criminal entries fascinating in their own unique ways. As for whether or not they actually did the crimes they're being accused of — well, you'll just have to watch their interrogations when the series comes out and see for yourselves.