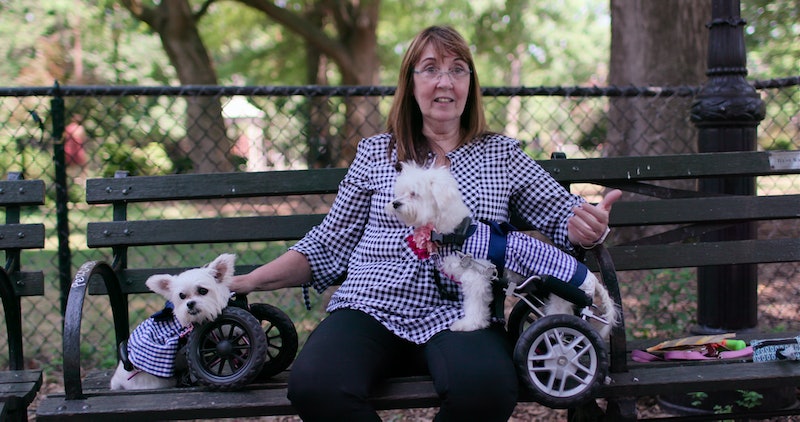 What if you could combine your love of Netflix with your adoration of adorable pups? That's precisely what Netflix's Dogs docuseries sought to do, featuring a collection of stories about the emotional bonds that can form between humans and their furry companions. It's a formula that's working out pretty well, actually — so well, in fact, that Netflix has renewed Dogs for a second season, which means there are many more tears and four-legged friends to look forward to meeting in the near future.

“We are so excited that our pack is back for Season 2 of Dogs! From the beginning we have said that the joy shown in Dogs helps bring people together and that same feeling will translate more than ever in season 2,” executive producers Glen Zipper and Amy Berg said in a joint statement provided to Bustle, also adding:

“Dogs offers us the ability to explore some of the most important human stories through relationships with our best friends and it’s been amazing to see how much these episodes have touched audiences and critics across the globe. Most importantly, our fans have become part of our extended family and we are honored to bring them a fresh set of stories that will allow us to connect with them yet again.”

However, it won't just be new stories that the series will be providing. Season 2 will give fans the chance to see their own dogs' stories featured on the show. Production for the new season has yet to get underway, which means there's still time for you and your dog to apply. All you have to do is share your submission on social media by tagging the show's official account (@netflixdogs) and using the hashtag #netflixdogstory on both Twitter and Instagram. And that's it. If your dog's story is chosen, they'll be able to appear in Season 2 and become one of the many beloved pups that viewers simply can't get enough of.

Season 1 brought many cuddly creatures onto our radar, introducing us to pups like Rory, a support dog to a young girl with epilepsy, and a retriever named Ice, who has become quite the fishing expert thanks to his human companion. The list goes on and on, but the common thread of all these stories is the undeniable proof of how big of a paw print these animals can leave on the world (and on our hearts).

There's no word yet on when exactly Season 2 will premiere, but there's no doubt that it'll prove to be well worth the wait, especially if your pup is one of the few that gets chosen. Just imagine curling up on the couch and seeing your own fur baby up on the screen. Then you can just sit back and watch the world come to love your dog just as much as you do. Just kidding, of course. Every dog owner knows that no one could ever do that, but hey, you get the idea.