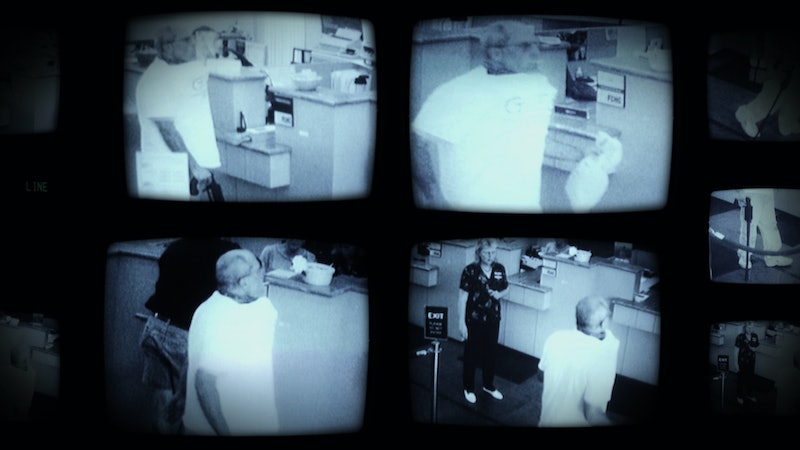 Netflix is releasing another true crime docu-series on May 11, and the convoluted story behind the new Evil Genius trailer is pretty intense. Evil Genius: The True Story of America’s Most Diabolical Bank Heist retraces the notorious 2003 robbery saga that eventually became known as the "pizza bomber heist." Even if you're already familiar with the story, though, Netflix revealed that now, "there’s more to the conspiracy and murders than was ever thought" — which sounds like there could be a surprising new twist.

"A robbery gone wrong and a terrifying public murder capture the nation’s attention," a press release for the show reads, "and a bizarre collection of Midwestern hoarders, outcasts, and lawbreakers play cat-and-mouse with the FBI." An accurate summary, sure. But the trailer reveals so much more.

"For being a small town, Erie has it's share of bizarre events," a reporter tells the camera in a scene from Evil Genius. "But there is nothing that raises as many questions as this case." The "pizza bomber heist" took place in Erie, Pennsylvania in 2003, and the trailer for the four-part mini-series begins with live footage from a moment the town will never forget.

As the sound of a ticking time bomb beeps in the background, you see a handcuffed man sitting cross-legged on the pavement in front of a cop car. That man, as viewers soon learn, had attempted to rob a bank — and after being apprehended by the police, it quickly became clear that he had an explosive device locked around his neck.

Viewers then learn that the man who robbed the bank — Brian Wells — may have been forced to do so after being held hostage. Wells worked at an Erie-area pizza parlor, and told police that he was taken captive while out making a delivery. After that, things got really weird.

Apparently, Wells' captors managed to get the explosive device around his neck and forced him to go on a "scavenger hunt" in order to find the key to unlock the device. Money was seemingly the ultimate motivation, but that's about the last thing you learn from the trailer in terms of how the heist actually went down.

As for who was behind Wells' reportedly forced robbery, it appears as if there was whole lot of finger-pointing, but not a whole lot of evidence. No fingerprints, no DNA — "there were a lot of tips coming in, but no smoking gun," a source says in the trailer.

Eventually, according to the aforementioned press release for the show, "a middle-aged mastermind named Marjorie Diehl-Armstrong — once a town beauty, now a woman grappling with mental illness — is arrested." But, did she actually do it? Viewers will have to wait and see. (Per a 2011 NPR story, Diehl-Armstrong was convicted for Wells' death and plotting the robbery, but some believe there was a different mastermind.)

Netflix has been doing a lot on the true crime front lately, and Evil Genius sounds like a welcome addition for fans of the genre. The streaming service released Wild, Wild Country — the story of a controversial guru and his cult-like following — on March 16. Later this summer, according to Variety, they'll be putting out The Staircase — a series about true crime novelist, Michael Peterson, who was accused of killing his wife in 2001 after she was found dead at the bottom of a staircase. (Peterson has maintained his innocence over the years.)

The story behind Evil Genius has been heavily covered over the years, but it appears as if Netflix's new docu-series may shed some new light on the 2003 crime. All four parts of the mini-series hit the streaming service on May 11, so you might want to go ahead and clear your calendar that day.