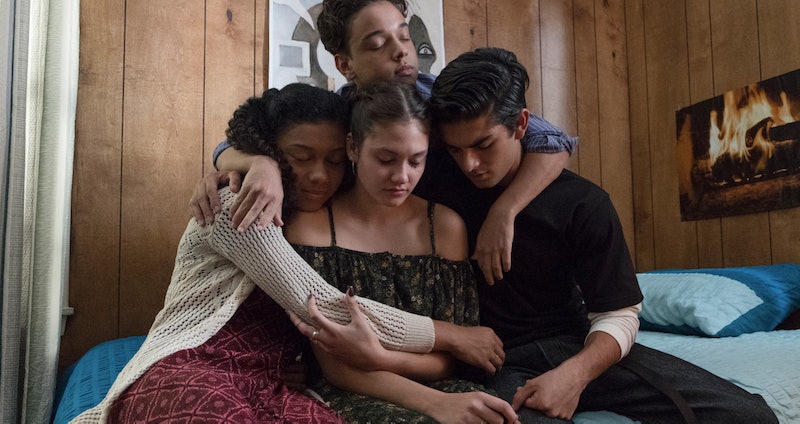 For all you pop culture junkies, Netflix's most marathoned shows of 2018 may come as a surprise. Many of the service's series that got major media hype and created tons of social media buzz this year, like Queer Eye and GLOW, didn't make the list (which doesn't mean they weren't loved, just not marathoned as much). The shows that did make the cut, though, cover genres ranging from coming of age to documentary, history to sports, horror to comedy. And while the list may be all over the map, its one common thread is intriguing, unique, and representative storytelling.

The list includes series released on Netflix between Jan. 1 and Nov. 28, is ranked by the highest average watch time per viewing session (based on US data, and not to be confused with overall viewing). The number one series? Coming of age comedy On My Block. The show, co-created by Awkward creator Lauren Iungerich, chronicles a tight-knit group of street-savvy teens navigating the ups and downs of life, friendship, and love when starting high school in LA's South Central neighborhood. The series has a 95 percent rating on Rotten Tomatoes, and since it premiered in March, it has been widely praised for its earnest and realistic view of teenage life in underrepresented neighborhoods.

On My Block is joined by other acclaimed teen-centric series on Netflix list such as 13 Reasons Why Season 2, Insatiable, and Anne with an E Season 2. Yet while there's clearly a demand for (and timelessness of) coming of age shows, the series on the list are all interwoven with much different stories. Here's the whole group:

As you can see, the list includes two sports-themed series, the documentary Last Chance U and reality show Fastest Car, which were ranked fourth and sixth, respectively. Last Chance U, which has three seasons, follows athletes with tumultuous pasts and little resources, shooting for dreams of making it big. Each installment takes place in a different community. The highly-produced Fastest Car, meanwhile, tests "sleeper" cars to see if they can keep up with exotic cars known for speed.

Yet another genre rounding out the list is crime/horror, represented by Part 2 of the acclaimed Making a Murderer and the premiere season of The Haunting of Hill House. Following its first season (which won the Primetime Emmy Award for Outstanding Documentary in 2016), Making a Murderer Part 2 continued unraveling the story of convicted felon Steven Avery. (In 2003, Avery was exonerated after being wrongly convicted of rape and was then convicted of murder a few years later.) The Haunting of Hill House also became an overnight sensation for its sheer terror, depth, and layers of metaphor.

And then there's Bodyguard, the BBC suspense drama, as well as Season 6 of the hit prison-set show Orange is the New Black. Really, none of Netflix's 10 most marathoned series of the year are quite like the next, and that's a pretty exciting thing to think about.