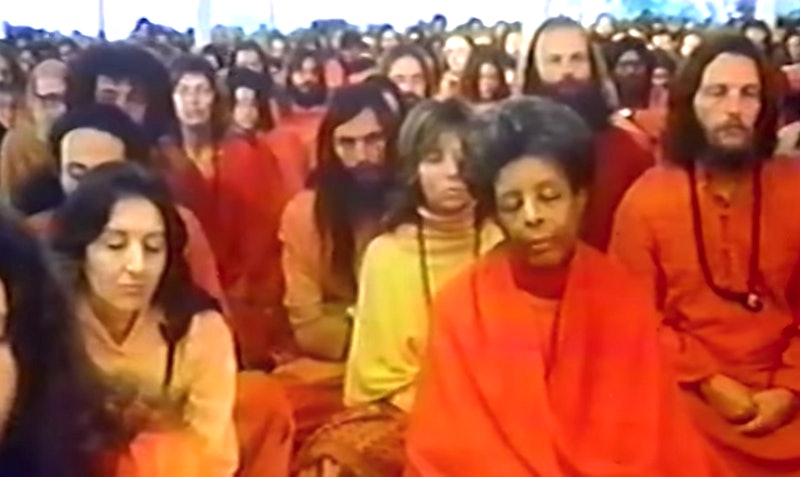 You'll be at the edge of your seat just watching the trailer for Netflix's new docu-series Wild Wild Country. The six-part documentary follows the rise and fall of the Rajneesh movement, a religious group that followed the teachings of Indian guru Bhagwan Shree Rajneesh in Oregon in the early 1980s. The story involves culture clashes, a hotel bombing, wiretapping, combative local politics, and bio-terrorism, yet it's barely talked about in modern America, overshadowed by the stories of other 20th century cults.

The story starts with Rajneesh buying a large amount of farmland in central Oregon to build his utopia, Rajneeshpuram. Thousands of his followers moved to the land to live together. According to the New York Times, the 64,229-acre commune grew to include 160-room hotel, a shopping mall, a town meeting hall, and its own security forces. However, the nearby town of Antelope, Oregon, was not pleased by all this activity.

The documentary covers how tensions rose between the Rajneeshee (the followers of Rajneesh) and the outside community that was wary of the follower's free-love lifestyle and other non-traditional choices. As the distrust grew between the two factions, things began to look ugly. After the Rajneesh took over the town of Antelope, the Times reports that the group brought in thousands of homeless people to attempt to tip a Wasco County election.

Using conversations with former residents of Rajneeshpuram and others who lived through the escalation, as well as archival footage, Wild Wild Country dives deep into the minds of the people involved in the conflict. It begins to snowball as the the Rajneeshee gain statewide and then national interest.

In 1983, there was a bombing at the Hotel Rajneesh in Portland, Oregon. According to Oregon Live, this led the group to form a highly-armed volunteer Rajneesh Security Force. In the documentary, outsiders explain that they were alarmed by the guns, which appeared to them like a military-style threat.

The most infamous Rajneeshee incident is only hinted at in the trailer: the 1984 Rajneeshee bio-terror attack. In order to try to suppress voter turnout at a county election, a faction of the movement committed the largest bio-terror attack in United States history by contaminating salad bars at local restaurants with salmonella. According to Slate, 751 people became sick with salmonella poisoning and 45 were hospitalized.

It took a year for authorities to discover who was behind the outbreak, but, once they began investigating, they discovered that certain members of the cult were engaged in all sorts of illegal plans. This story is a doozy, and, according to an early review from The Hollywood Reporter, viewers will be left unsure of who to believe, with many of the parties explaining their side of the story.

If the series piques your interest in cults and unusual religious movements, there's no shortage of content deep diving into other stories surrounding the subject. For fans of documentaries, there are several available right now on Netflix, including Holy Hell, the story of a former Buddhafield cult member's experience following a charismatic, sociopathic leader, and Deprogrammed, a look into an anti-cult organization that worked to "reverse-brainwash" former cult members. If you're looking for non-documentary fare, there's Paramount Network's mini-series Waco about the 51-day standoff between the Branch Davidians and the FBI, starring Michael Shannon and Taylor Kitsch.

Wild, Wild Country hits Netflix on Friday, March 16 after its premiere earlier this year at the Sundance Film Festival. Based on reviews from that screening, you might want to hold off making any plans that weekend — you're going to need some time to process everything. And you're definitely going to marathon this one.

More like this
A New Netflix Doc Will Explore The Unsolved Murder Of Jill Dando
By Sam Ramsden
This First Look At 'The Gold' Shows Jack Lowden In A Whole New Light
By El Hunt and Sam Ramsden
Jennifer Coolidge Hunted For Jewels & Lashes In J.Lo’s Hotel Room
By Jake Viswanath
Owen Thiele Asked Sundance Attendees About Films That Don’t Exist
By Grace Wehniainen
Get Even More From Bustle — Sign Up For The Newsletter
From hair trends to relationship advice, our daily newsletter has everything you need to sound like a person who’s on TikTok, even if you aren’t.