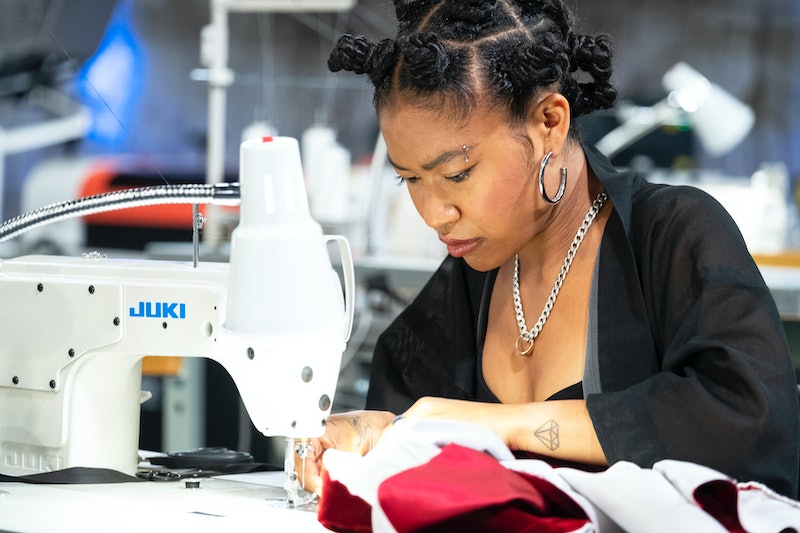 Get your sewing kits and your popcorn out, because another fashion competition show is imminent. On Wednesday, Jan. 15, Netflix dropped the trailer for Next In Fashion, its new reality show. The show sees Queer Eye style guru Tan France and fashion icon Alexa Chung put their own spin on the Project Runway-style competition. And they definitely look like worthy successors to the iconic combination of Heidi Klum and Tim Gunn.

On Next in Fashion, the duo will search for the best new designers in the game. But what makes this show a bit different from, say, Project Runway, is that the contestants aren't complete novices. They all have relevant experience in the fashion industry, dressing A-list celebrities and working for designers like Stella McCartney and Alexander Wang, but haven't made it as household names themselves. That's where France and Chung want to help out.

Eighteen contestants will compete over the course of 10 episodes, with each one centering around a different trend or style "that influenced the way the world dresses," according to a press release obtained by Bustle. The winner will receive $250,000 in their bank account and an opportunity to create their debut fashion collection with Net-a-Porter. Is it too late to sign up?

While the grand prize is enticing enough, it's also likely that the main reason these contestants are on the show is the opportunity to hang with France and Chung. Even the hosts were ecstatic to work with each other. "I only met [Alexa] once at a party earlier on in the year and I was a huge fan and really nervous, and apparently she was a fan and she fan-girled," France told Elle in June 2019. "We are dynamite together. We didn't know each other before but we get on like a house on fire and that's what makes it a really fun show."

In an interview with Yahoo!, France also promised that Next in Fashion will be different than shows like Project Runway due to one major factor: There's no drama. "The tone is so different ... with Project Runway, there’s a lot of behind the scenes stuff. There’s a lot of drama between the contestants. Ours isn’t about that," he said. "I wouldn’t get involved with a show that is about the drama of it — I want just the beauty of the craft."

Made in Fashion hits Netflix on Wednesday, Jan. 29, and with France and Chung, the show is sure to serve viewers beauty and craft.

More like this
Move Over, 'Sunset'! The Drama-Filled Trailer For 'Selling The OC' Is Here
By Nola Ojomu
Bachelor Nation's Blake Horstmann Is Dating 'Love Is Blind' Star Giannina Gibelli
By Jake Viswanath and Radhika Menon
Here’s Everything Coming To & Leaving Netflix In July
By Grace Wehniainen
What That Ominous 'Selling Sunset' Season 5 Finale Could Mean For Season 6
By Orla Pentelow and Brad Witter
Get Even More From Bustle — Sign Up For The Newsletter