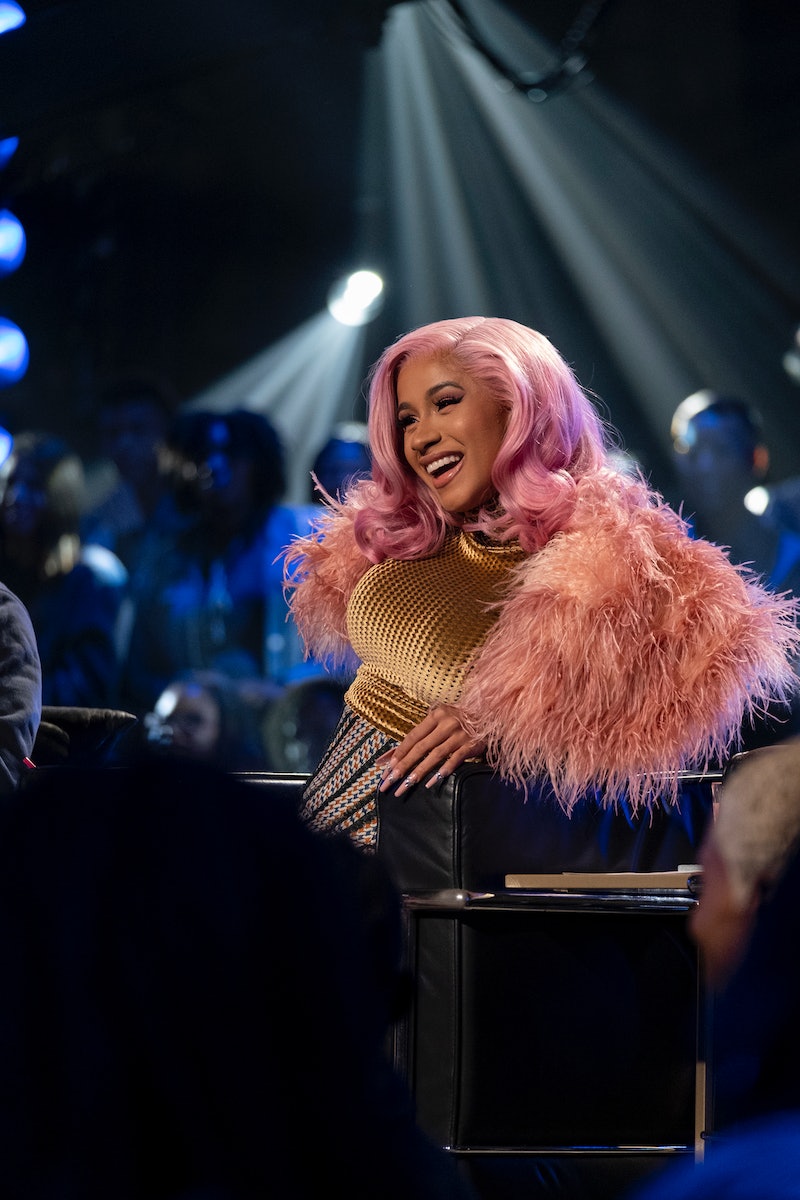 Netflix is diving into the world of music competitions, but their new show has some major twists, courtesy of rap icons like Cardi B. Netflix's new Rhythm + Flow trailer gives fans a sneak peek at Cardi B's new role as a judge, alongside contemporaries Chance the Rapper and T.I., and she's just as vibrant and hilarious as you would expect. "Let the games begin," she announced in the trailer while on a private jet, letting out one of her signature cackles.

The streaming service's first music competition show sees Cardi, Chance, and T.I. come together as they search for the next hip-hop sensation. According to a press release obtained by Bustle, the show's official synopsis reads, "The series brings together industry legends across a multi-city search in hip hop epicenters Los Angeles, New York, Atlanta and Chicago, to find raw talent and help undiscovered artists pursue their come up."

The trailer gives fans a glimpse of the judges in action, as they guide the contestants to become the best artists they can be. And while it seems that the contestants are free to embrace their own styles of rap and hip-hop in the competition, there's still a strict standard on what the judges are looking for. "Success in this line of work looks a million different ways," Chance said in the trailer. But, he added, "There is a criteria that you gotta meet."

The series will feature a huge slew of guest appearances from major R&B and hip-hop artists, including Quavo, Fat Joe, Anderson .Paak, Outkast's Big Boi, Miguel, Teyana Taylor, Jhené Aiko, Ty Dolla $ign, DJ Khaled, John Legend, and Snoop Dogg. And as Snoop warns at the very end of the trailer: "This ain't The Voice, motherf*cker." The show will also feature one of the final public appearances by the late Nipsey Hussle.

Rather than release the entire season at once, as Netflix usually does with its original programming, the streaming service is trying out a different method of premiering new episodes for Rhythm + Flow, spacing out the season over a three-week period. The first four episodes, covering the audition rounds, will premiere on Wednesday, Oct. 9. The next three episodes, which focus on cyphers, rap battles, and music videos, will debut the following week on Oct. 16. And the final three episodes, which will cover samples, collaborations, and the season finale, will hit Netflix one week later, on Oct. 23.

Chance talked about the importance of Rhythm + Flow during an appearance on The Kelly Clarkson Show. He also hinted that the winner will end up with something different than your usual music competition show. "It's hip-hop's first ever official, legitimate, hip-hop contest show," Chance remarked.

"It's basically really cool because with a lot of those TV competition shows in music, at the end, they give you a record contract and they kind of mess you over...", he added, before Clarkson cut in and teased that she didn't know what he was talking about. "That's my life," she said of her famously combative record label experience after winning American Idol. "I was the first one to get sucked into that."

If the prize of Rhythm + Flow isn't a record contract, then it has to be something equally as exciting for a new artist. But it sounds like you'll have to tune in to find out. .

More like this
'RHOBH' Star Diana Jenkins’ Fiancé Asher Monroe Once Shared A Stage With Kelly Clarkson
By Brad Witter
Move Over, 'Sunset'! The Drama-Filled Trailer For 'Selling The OC' Is Here
By Nola Ojomu
This 'Bridgerton' Polin x 'Love Island' Crossover Is Everything
By Darshita Goyal
Selena + Chef Season 4 Was Filmed At Hannah Montana's Old Malibu House
By Jake Viswanath
Get Even More From Bustle — Sign Up For The Newsletter