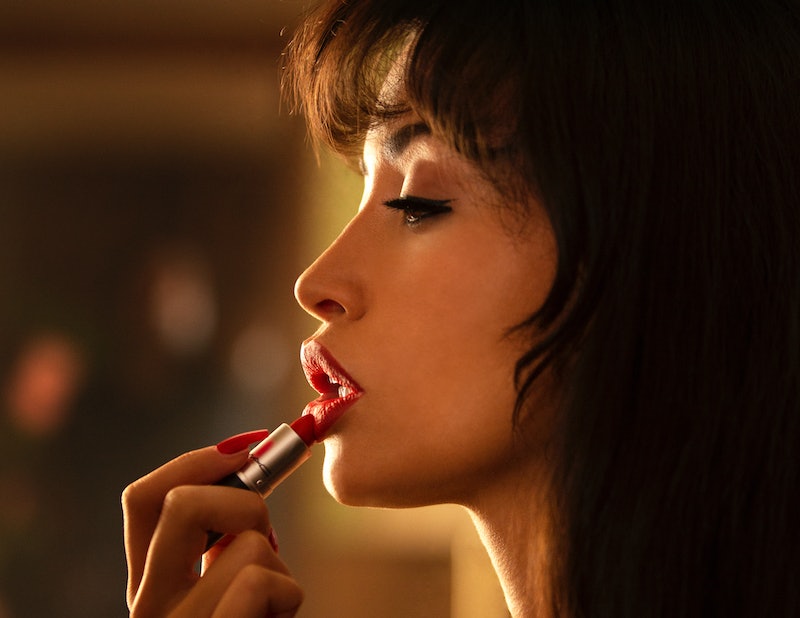 The red lips. Those feathered bangs. That iconic jumpsuit. A new teaser for Netflix's Selena: The Series gives fans a first look at The Walking Dead's Christian Serratos as Selena Quintanilla.

Part 1 of the coming of age scripted series, which debuts in 2020, will chronicle the Mexican-American Tejano singer's rise to the top of the charts. The first trailer doesn't give away much, but it does offer a behind-the-scenes look at Serratos getting into character. And her process starts with Selena's music.

The clip shows Serratos diving in as she puts on Selena's 1992 single "Como La Flor." Like Jennifer Lopez, who portrayed the singer in the 1997 film, Serratos' Selena transformation is complete with her signature ruby red lipstick, and, of course, an outfit change. As she walks through set, fans also get a look at the rest of the cast in character, including Training Day's Seidy Lopez as Selena's mom, Scandal's Ricardo Chavira as Selena's dad, and Madison Taylor Baez, who plays Selena at 8 years old.

And then, finally, it's what fans have been waiting for — a chance to see Selena in action. Serratos steps up to the mic to give us the first real glimpse of her as Selena onstage, in her element. But, in case you forgot, this isn't the real thing, this is just the rehearsal. "Alright, Christian, we're ready to shoot," someone shouts from behind the camera snapping us all back to reality.

Fans will have to wait a little while longer to see Selena: The Series, which is executive produced by Selena's sister Suzette Quintanilla, along with Jaime Dávila and Rico Martinez from Campanario Entertainment, Simran A. Singh, and Moisés Zamora. But, it's clear that the teaser has already proved that Serranos is a spot-on choice for Selena. "This Selena trailer gave me the chills," a fan named @idayallday tweeted. Another person named @MsFluffFluff said they were "literally quaking right now" in excitement after seeing Serranos' Selena.

One fan was so impressed they swore they'd keep their Netflix account just a little while longer. "I'll be damned if I dont [sic] stay just to watch it," user DeadlyVixen830 wrote.

In a 2018 statement from Selena's sister, Suzette Quintanilla, who will be played by Noemi Gonzalaez in the Netflix series, she promised that audiences would really get to see a faithful depiction of the singer's life. Fans will "finally get the full history of Selena, our family, and the impact she has had on all of our lives" with this show, she said.

Selena may already be the best-selling female artist in Latin music history, according to Billboard, but now Serratos will help introduce Selena to a new generation who can continue to keep her legacy going.

More like this
At 28, Debra Jo Rupp Was Living A Much Different '70s Show
By Grace Wehniainen
Netflix Shut Down 'Bridgerton' S3 Rumours About A “Very Dark” Storyline
By Bustle
Ashton Kutcher Wants Danny Masterson “To Be Found Innocent” In Rape Retrial
By Jake Viswanath
'The Queen’s Gambit' Season 2 Tweet Wasn’t From Anya Taylor-Joy
By Mary Kate McGrath, Jack Irvin and Grace Wehniainen
Get Even More From Bustle — Sign Up For The Newsletter
From hair trends to relationship advice, our daily newsletter has everything you need to sound like a person who’s on TikTok, even if you aren’t.