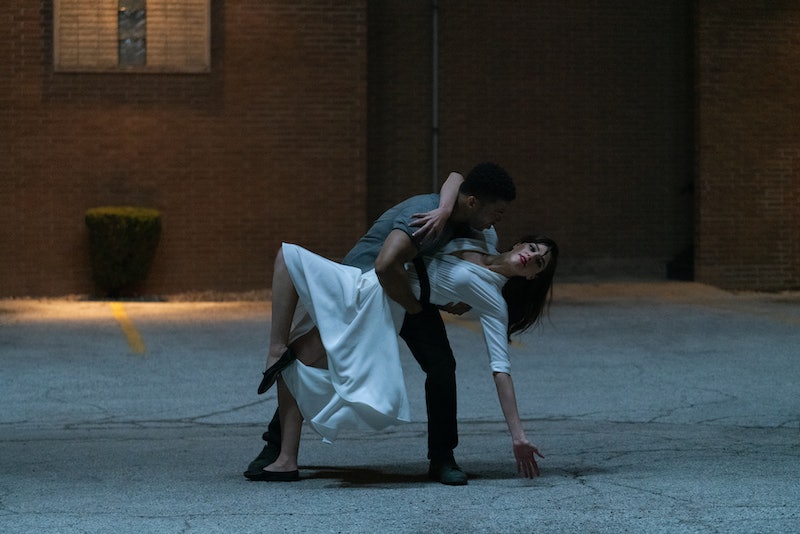 If some of your favorite McKinley High students from Glee moved to sunny Los Angeles after graduation, where would they be now? Probably in Netflix's new musical show. The trailer for Netflix's Soundtrack is here, and if there's a joyous musical-sized hole on your must-watch TV list, this looks like the series for you.

Jenna Dewan, Callie Hernandez, and Paul James lead Soundtrack, described by the streaming service on Twitter as "a musical romance series that looks at the love stories connecting a diverse group of people in Los Angeles." So, think Love Actually with a Glee twist, and expect high-energy choreography, theatrical emotion, and some devastatingly romantic stories.

In addition to being very Glee-esque, Soundtrack is definitely giving off major La La Land vibes. It's not just the fact that the show takes place in LA, or that it follows a couple of ambitious artists who fall in love — it's the actual star herself. Hernandez, who plays Nellie in the series, starred as one of Emma Stone's roommates in La La Land. No wonder the trailer gives off so much energy from the Oscar-winning film. In addition to Hernandez, the show also stars singer Christina Milian, Robbie Fairchild, Campbell Scott, and Madelein Stowe, to name a few.

The new show comes from Gossip Girl writer Joshua Safran, who also helmed the cult classic musical show Smash, so rest assured: this won't be a half-baked musical. In a new interview with Entertainment Tonight, Safran promised that, though Soundtrack will be executed differently than most musicals, it will still feature all of the extravagance and emotion that people love about the genre.

"It's not your typical musical where you're singing on a stage or walking down the hall singing a love song," he explained. "Every song matters to the plot and every song is a huge production number." He also told the outlet that every character has their own musical niche — but couldn't reveal if each actor actually got a chance to perform their own songs.

Meanwhile, Dewan revealed a little bit more about Soundtrack in her own interview with ET. "Every episode is its own self-contained love story musical, so there's song, there's dance, there's acting," she said. "It's really unique. I don't think you'll ever see anything like it. It's cool."

Safran even told ET that there was "some Christmas stuff" in the new show, making Soundtrack the perfect addition to your holiday watching queue when it hits Netflix on December 18.

More like this
What Is Mary J. Blige’s Net Worth? The 9-Time Grammy Winner Is Doing “Just Fine”
By Hugh McIntyre
Ashton Kutcher Wants Danny Masterson “To Be Found Innocent” In Rape Retrial
By Jake Viswanath
All The ’70s Easter Eggs You Missed In 'That ’90s Show'
By Grace Wehniainen
At 28, Debra Jo Rupp Was Living A Much Different '70s Show
By Grace Wehniainen
Get Even More From Bustle — Sign Up For The Newsletter
From hair trends to relationship advice, our daily newsletter has everything you need to sound like a person who’s on TikTok, even if you aren’t.