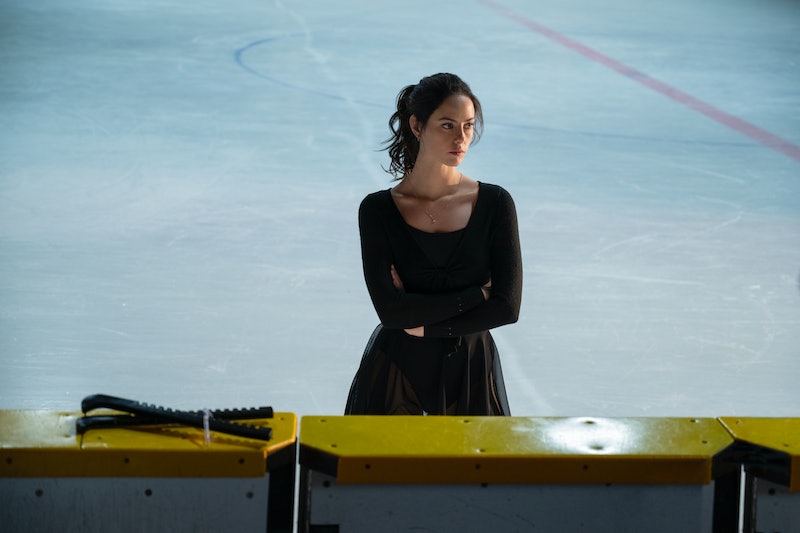 In the first five minutes of Spinning Out, the Netflix series about figure skating that dropped in its entirety on New Year’s Day, Kat Baker jogs through snow flurry to the same symphony that was playing when she cracked her skull on the ice a year ago, seen in a gauzy, desaturated flashback. We watch her finger the four inch scar that now runs down her parietal bone, her bloody toes poking through broken tights, like Black Swan on skates. Her house brims with shorthand for family trouble: her mother, Carol, is asleep on the sofa, the TV’s been left on all night, empty beer bottles need clearing up. Kat plays mom to her younger sister, Serena, making her breakfast and organizing her bedhead into a ponytail. Their routine rouses Carol, who literally shoves a hard-boiled egg into Serena’s reluctant mouth, before forcing her out of her chair to do a dry-run triple toe-loop in the living room. With a lack of compassion we’re already inured to, she tells Kat that she won’t be paying for her coaching anymore. It’s snowing out, but it’s colder inside. It’s the first five minutes. It’s the whole of their lives.

For these three women — Carol (January Jones) was a star skater that never reached her potential; Kat (Kaya Scodelario), 21, is an extraordinary talent with shaky nerves; Serena (Willow Shields), 16, is the budding phenom — figure skating is more than a shared hobby and less remunerative than a family business. They can’t afford it, but they can’t quit it. Kat compares skating to “breathing” but it’s the credit card debt Carol racks up paying for ice time that better crystallizes their fixation. The Bakers are moons stuck in skating’s demanding orbit. No matter if they love or hate each other, it compels them close again and again, evening session after morning session, every ellipse of the ice an oblong path back to each other.

The series avoids reducing these women to their on-ice personas or their mental health struggles. As neglectful as Carol can be, she stills shows up to Kat’s every competition. As cutthroat as Serena can be at the rink, she’s allowed to be soft at home.

Spinning Out is a drama set inside the catty, competitive world of elite figure skating, but the shallow rivalries that emerge from the rink are mostly played for comic relief. It’s the Bakers that drive the narrative. Besides skating, the women are bonded by the secret that Carol and Kat are living with bipolar disorder, a fact Carol fears could ruin their reputations among the Little Girls in Pretty Boxes set. The responsibility they take for each other’s mental health smooths the rifts that skating can create. It’s a fight about Serena’s new coach that leads Kat to move out early in the season, for example, but it's caring for Serena when Carol stops taking her lithium that brings her back. The series avoids reducing these women to their on-ice personas or their mental health struggles. As neglectful as Carol can be, she stills shows up to Kat’s every competition. As cutthroat as Serena can be at the rink, she’s allowed to be soft at home. “Am I like mom?” Kat asks her, vulnerable, in the middle of the season. “God, no,” she answers without missing a beat.

It’s more kind than true, of course. Kat is like Carol in the way people with matching struggles can’t help but have something in common. One of the show’s virtues is that it allows its central characters to rebound to each other after moments of crisis without too much explanation. In families, time is often its own explanation. The distance between Kat and Carol fades simply because they can no longer bare the distance. In the series finale, Kat finds her mother crying in the parking lot after cheating on her boyfriend. Kat’s disgusted by her, but, in the midst of her own relationship crisis, still needs her advice: “How can people like us, with f*cked up brains like ours, know what love is?”

“It’s all about the long game,” Carol tells her girls over and over. She’s talking about protecting the secret of their disorder, but she could be talking about living as a mother or a daughter or a sister. “I’m the one that suffers whenever you or Kat goes crazy,” Serena complains at one point. “This will never end for me, will it?”

Despite the pressure cooker of figure skating and the caprice of her mother, the show gives us plenty of reasons to think Serena should stay inside the demented snow globe of Sun Valley, starting in those first five minutes. Kat sifts through her sister’s tangled hair in a primal display of intimacy as reflexive as it is astonishing. How quickly we let our family get close to us, to our heads, to the scars hiding there.

“It was always you two against the world,” Carol says of her daughters in the season finale. That was true when they were kids, facing down the unpredictability of their mother with no way out. Now, they’re young adults, and it’s an alliance they'll have to choose for themselves.