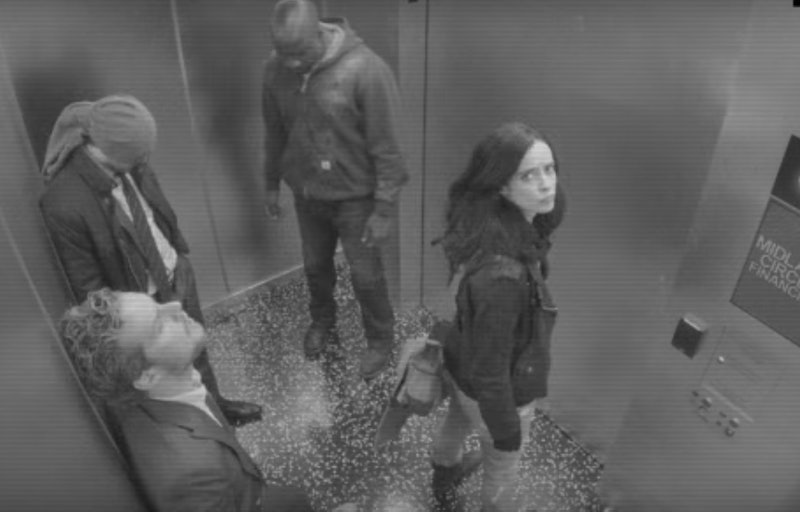 It's finally happened, you guys. The eagerly anticipated premiere date for Netflix's The Defenders may have just been released in a teaser for the show, and it looks like we might not have too long to wait for it. Presented as security camera footage from Midland Circle, The Defenders teaser trailer shows superheroes Jessica Jones, Luke Cage, Daredevil, and Iron Fist awkwardly sharing an elevator ride in total silence, while some painfully bad piped in music fills in the gaps. It's an absolutely pitch perfect introduction for fans to finally see the four Marvel superheroes in a scene together, even if they don't happen to be talking.

But look a little closer at the footage, and there's something else that you might want to get really excited about: Those numbers in the top right corner of the screen. If you wait until the very end of the clip, you'll see that they end on 08:18:20:17, so you have to wonder: could this be Netflix giving us a clue that The Defenders will premiere on August 18, 2017? Because, Sweet Christmas, I hope so. That really isn't too long for fans to have to wait for the show to finally premiere on the streaming service.

There's something else supremely interesting about this trailer too, though. It's possible that this small scene could be revealing the first time that The Defenders meet up together. And the clue is in the fact that the security footage is supposedly coming from Midland Circle.

Fans of Daredevil might remember Midland Circle from Season 2 of the show, in regards to that massive, mysterious (and possibly bottomless) hole in the middle of Hell's Kitchen that was never really explained. Midland Circle owned the construction site within which the hole resided. So it's perfectly possible that this particular Daredevil plot hole from Season 2 was a thread that was left deliberately loose, so as to be tied up within a bigger storyline of The Defenders.

In January, Entertainment Weekly even described the scene where the Defenders first meet on the show, as happening “at the offices of Midland Circle,” with the four heroes arriving separately from each other, not expecting to cross paths. And with the Defenders all appearing to be out of breath in that elevator of the teaser trailer, it definitely seems as though they may have battled through a legion of villains before they've even managed to say a proper hello to one another.

Well, bravo, Netflix. Consider me sufficiently teased. And here's hoping that The Defenders will be premiering on August 18, as this short clip appeared to hint at. Because I am so ready for that official countdown to happen.