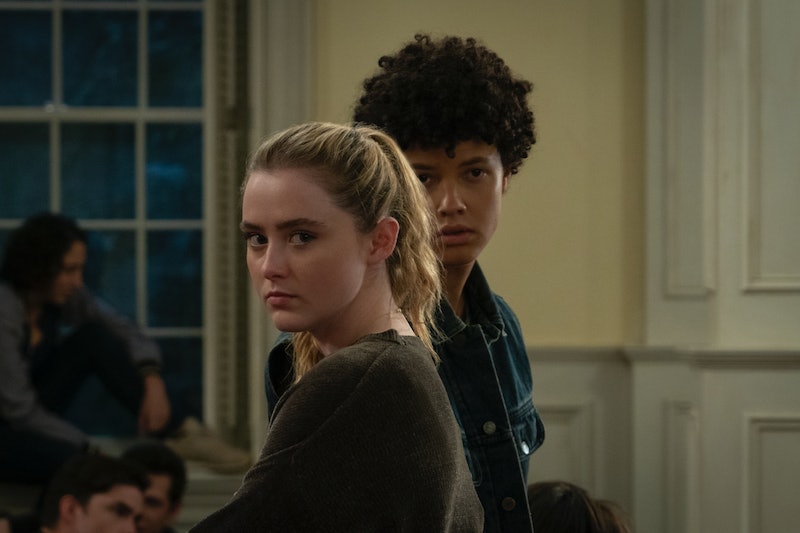 On Thursday, April 4, Netflix dropped a sneak peek for their newest teen thriller, and The Society trailer sets up what's sure to be your newest marathon-worthy obsession. A press release obtained by Bustle for the new series, which will make its debut on the streaming service on May 10, shared its eery synopsis. It reads,

"The Society follows a group of teenagers who are mysteriously transported to a facsimile of their wealthy New England town without any trace of their parents. Their newfound freedom will be fun... but it will also be very dangerous. As they struggle to figure out what has happened to them and how to get home, they must establish order and form alliances if they want to survive."

The journey of fear, angst, and hints of betrayal that can be felt throughout the sneak peek will most certainly leave you intrigued about how things will pan out for the group of rebellious young adults. In the trailer's opening, one character uses the phone in an attempt to get help. “Mom, it’s me again. Where is everyone?," she horrifyingly questions. “It’s been nine days. We’re all alone. Some of us thought it would be fun to be in charge of ourselves. Things got bad.”

Despite being touted as a Netflix Original, The Society and its premise draw inspiration from an iconic prototype that may feel a bit familiar to some. Teen Vogue pointed out a direct comparison between The Society and the famous novel Lord of the Flies, noting the parallel themes of survival and social hierarchies. Speaking on those similarities, Society showrunner and executive producer Chris Keyser explained what aspects of the Flies narrative motivated him to create an update of the classic.

"I love the question that novel asks: if we are left to our own devices, will human beings find a way to co-exist or slide toward chaos?" he told Teen Vogue. "The Society's take on that is to pose the question, not in the world of children — or full-grown adults — but to a group of young men and women who are at that exact moment in their lives when they become responsible for their own destinies. It's as if adulthood, with all its risks and opportunities — and in its most extreme form — arrives overnight."

While the series does share many qualities with William Golding's 1954 novella, Keyser assures that his spin with The Society will "ask big questions about human nature." Continuing to speak with Teen Vogue about his latest young adult drama, the Party of Five creator shared,

"The other twist is that, unlike most versions of Lord of the Flies, which are set in some form of wilderness, ours takes place right in the heart of civilization. So the questions aren't what will I eat and how will I find shelter. The questions are things like: who makes the rules, how do we keep ourselves safe from each other, how do we protect the weakest among us — who owns the stuff all around us?"

With those details, there's no telling what will happen when this group of once-privileged teens are now forced to lean on one another while fending for themselves in their new world.

That said, The Society definitely all the hallmarks of becoming the latest cult teen drama that fans can't get enough of. And I, for one, can't wait to watch as it all unfolds.

More like this
Netflix Reveals First Look At Wednesday In The 'Addams Family' Spinoff Series
By Bustle Editors
'Firefly Lane' Season 2 Will Be The Show's Last — But There's A Twist
By K.W. Colyard and Grace Wehniainen
The 'Heartstopper' Cast Were Spotted Filming In A Major City
By Nola Ojomu and Sam Ramsden
Nicola Coughlan Shared A Lady Whistledown Excerpt From ‘Bridgerton’ Season 3
By Grace Wehniainen, Alyssa Lapid and Sam Ramsden
Get Even More From Bustle — Sign Up For The Newsletter