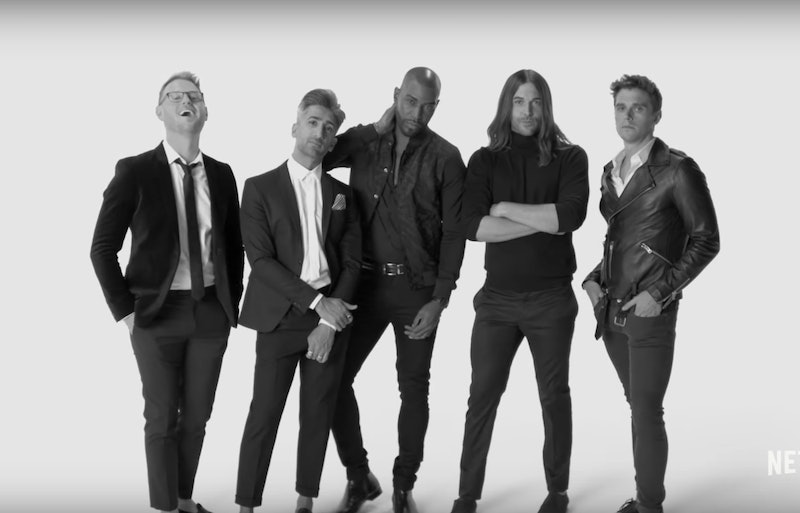 It only seems like yesterday that Carson Kressley and Kyan Douglas taught straight men across America how to shave properly in the original Queer Eye For The Straight Guy. Eleven years since that series ended, the first trailer for Netflix's Queer Eye introduces a new Fab 5, but also delivers an emotional punch and an important message. A voiceover states, "The original show was fighting for tolerance, our fight is for acceptance," and the trailer later invites viewers to see a host of lifestyle factors differently, such as fashion, culture, food, and grooming. But then the narrator states, "See love differently. See each other differently," and it's totally cool if you catch some feelings from that sentiment. Goodness.

While showing the Fab 5 working with a variety of men on makeovers, there are some emotional scenes and statements. That includes plenty of tearful loved ones embracing these newly made-over men and empowering testimonials regarding their desire for change. You see, for instance, how small changes from the Fab 5 can amount to lifestyle differences. "I want him to look at his diet and see the possibility of a different kind of life," says food and wine expert Antoni, while design expert Bobby proffers, "I want to give him a space that he can entertain a potential lady-friend."

But clearly, the show isn't just fixated on superficial change. When culture expert Karamo is asked whether he's "the husband or the wife" in his marriage by a man he's making over, he calmly responds, "That is a misconception." As such, the Queer Eye trailer suggests the show will be exploring ideas of change and acceptance on a broader level. Showing the benefits that can come from learning about each others' differences, instead of depending on assumptions regarding them. That's obviously important for the LGBTQ community, particularly in obtaining respect, understanding, and even common ground through education. But it feels especially applicable to the all-round divisive nature we're currently experiencing in modern America.

In an interview with Entertainment Weekly, series creator David Collins explained how acceptance is so integral to Queer Eye this time round. Referring to each episode's makeover subject as a "hero," Collins explained:

"In order to make the emotions bigger, you actually had to see how [the Fab 5] were reacting to being with a cop from the South who was a Trump supporter, [or] ‘hillbilly Tom,’ who refers to himself by saying ‘you can’t fix ugly.' These guys walked away truly loving every single hero that they made over and talked about them for weeks afterward. It affected them just as much as they affected our hero."

In this regard, Queer Eye feels like it could be a monumental show for humanizing individuals on both sides of the LGBTQ spectrum, and for the understanding of both sides, too. The original show was celebrated for breaking down barriers and educating America on what it meant to have a queer perspective (and how to shave correctly, of course). But it also engaged audiences in a dialogue regarding tolerance and unity at a time when the U.S. government was openly opposed to gay marriage. Judging from this first trailer, Queer Eye also looks to be endorsing the same conversations at an equally critical moment in LGBTQ history.

Whereas Queer For The Straight Guy made its play for the hearts of the conservative American public through lashings of humor, Queer Eye seems as though it's vying to do so by dialing our emotional responses up to maximum. But maybe that's what we need. Maybe a good cry, an in-depth makeover, and some empathy is exactly what will make America great again. The series premieres on Netflix on Feb. 7.

More like this
What’s New On Netflix: Meet 'The Real Bling Ring'
By Arya Roshanian
Jinkx Monsoon Is About To Get Real Sketchy
By Sam Ramsden
Kenan Thompson Pointed Out A Super True Detail About 'Friends' In His Emmys Monologue
By Grace Wehniainen
What’s New On Netflix: Camila Mendes & Maya Hawke 'Do Revenge'
By Arya Roshanian
Get Even More From Bustle — Sign Up For The Newsletter