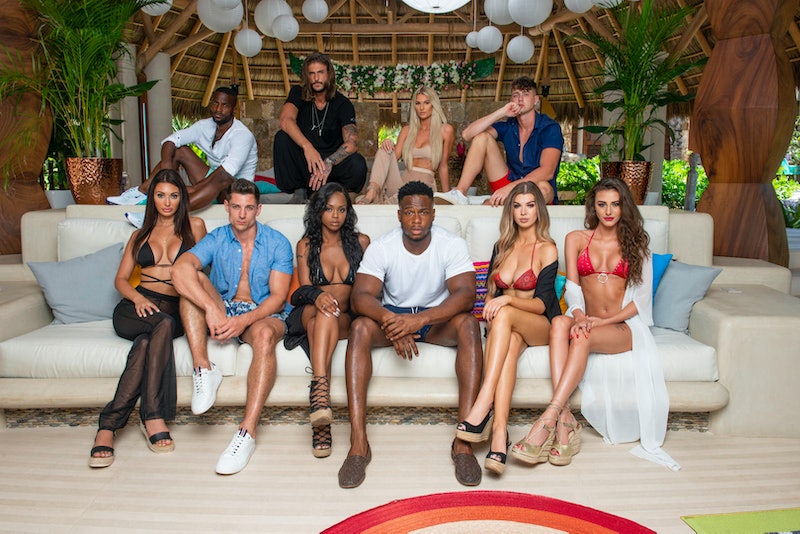 Love is Blind is in between seasons and Bachelor in Paradise has officially been postponed, but that doesn't mean reality TV fans can't get their fill of beautiful people falling in love in exotic locales. On Friday, April 10, Netflix released the trailer for Too Hot to Handle, the new dating competition show that promises to combine the addictiveness of Love is Blind with the sexy, sun-drenched qualities of Love Island.

Coming just in time to distract us all from social distancing, Too Hot To Handle will premiere on April 17, and, per Netflix, centers on 10 "young, hot singles from around the world," who arrive in a tropical paradise in order to compete for $100,000 and potentially even fall in love. However, there's a twist: "These commitment-phobes who love a casual hook-up, will have to give up all hanky panky for the entire retreat if they want to win," the press release explained, adding that there will be "no kissing, no heavy petting, and no self-gratification of any kind," if they want to win the big prize.

And the show is taking that very seriously, because if any of the couples give in to temptation, money will be deducted from the pot. Will the singles be able to form a strong emotional bond if physical connections are off the table? Or will they give in to their urges? Either way, it's guaranteed to be everyone's newest reality TV obsession.

"All we've gotta do is just keep our pants on," one woman says near the end of the trailer — and it definitely sounds like that's easier said than done, based on all of the steamy activities that Too Hot to Handle has planned to tempt these singles. In addition to the usual reality TV trappings, which included good-looking people in skimpy swimsuits, gorgeous pools, and stunning beaches, it seems that the group will do everything from covering themselves in mud to binding up their partners, all in the name of testing their self-control. "I'm starting to look at the fish," a guy says with a laugh, clearly at his wits' end.

Still, it seems that just like Love is Blind before it, the experiment presented in Too Hot to Handle might result in some real romances. "I don't look at him and just see sex," someone says in a voiceover. "Maybe something more can come from this." Meanwhile, another contestant tells the object of his affection that "I don't want to break the rules" and start a physical relationship with her.

Helping them along the process of seeing if their emotional desires outweigh their sexual urges is Lana, an Alexa-style robot who tells them the rules and appears to keep track of how much money is being deducted from the overall pot. "This retreat is to help you gain deeper emotional connections," Lana promises — to which one girl fires back, "As if some robot is telling me I can't do anything."

Is it possible these sexy singles might be able to actually find love? Or will they be willing to give up the prospect of $100,000 in order to hook up with their fellow hotties? Looks like everyone will just have to tune in on April 17 to find out.

More like this
Bachelor Nation's Blake Horstmann Is Dating 'Love Is Blind' Star Giannina Gibelli
By Jake Viswanath and Radhika Menon
Chrishell Stause & G Flip Have “No Rules Or Regulations” In Their Relationship
By Brad Witter
Move Over, 'Sunset'! The Drama-Filled Trailer For 'Selling The OC' Is Here
By Nola Ojomu
Who Is 'Umbrella Academy' Star Elliot Page Dating After His Divorce?
By Jake Viswanath
Get Even More From Bustle — Sign Up For The Newsletter