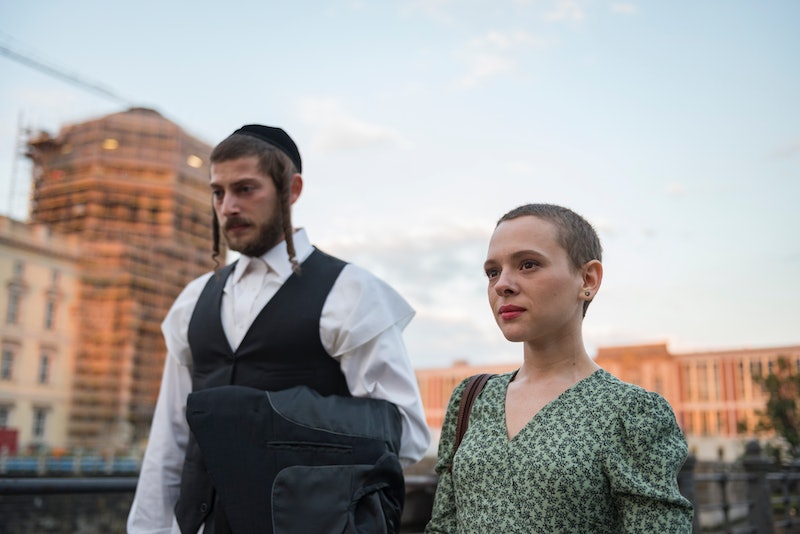 Netflix's new limited drama series, Unorthodox, tells the powerful true story of a woman who flees her strict Hasidic community in Brooklyn in order to live a secular life in Berlin. It's based on Deborah Feldman's 2012 memoir of the same name, and though series producers Anna Winger and Alexa Karolinski did take some liberties with the story, the journey that protagonist Esty (Shira Haas) undertakes is largely true to Feldman's life.

According to a New York Times profile, Feldman was born into a Yiddish-speaking Hasidic Jewish sect founded in Brooklyn by Holocaust survivors after World War II. The community was grounded by the belief that Hitler's genocide was God's punishment for European Jewish assimilation. In order to prevent further tragedies, Feldman was taught that Jews must live apart from society and abide by the most conservative religious rules. This led to Feldman having a pretty repressive childhood: by 17, she was married to a man she barely knew. She was 23 when she decided to take her young son and run away.

"I doubt it came as a surprise to anyone that I left the Hasidic community," Feldman wrote in The Guardian in 2010. She described starting with small things, like wearing clear nail polish and subtle eyeliner, and riding the New York subway. Her most illicit activity was sneaking off to the library to read banned English books like Little Women, Anne of Green Gables, and Jane Austen — stories about young women who have the determination to chart their own path in life. "I wanted to see the world, wear jeans, drive a car, learn how to play the piano – all of which were impossible dreams for a woman of my circumstances," she wrote.

After leaving her community in 2006, Feldman attended Sarah Lawrence College in New York. She wrote in The Guardian that at that time, she was "consumed by an obsession with everything I had previously known to be sinful," which meant going to clubs, drinking beer, flirting with boys, smoking cigarettes, cursing, and eating pork. Once she felt she had sufficiently "tried enough of what had been forbidden," she became interested in politics, feminist theory, and independent films.

Feldman and her son only moved to Berlin after she published her second memoir, Exodus, in 2015. That's one of the main changes in Netflix's adaptation: in Unorthodox, Esty runs straight to Berlin.

"With Deborah’s blessing, we made a lot of changes," Karolinski, who grew up in Berlin, explained to The Times of Israel. "We brought Esty to Berlin to be able to talk about what it would be like for a Satmar Jew to flee to the country of the Holocaust's origin, and to reflect on how Berlin is built on trauma and how history creeps through everything there."

Director Maria Schrader also told The Times of Israel that while this is a story of a woman rejecting her religious roots, they "avoided any easy opportunity to judge a specific way of life, even though it may be foreign or unsettling for many." The result is a nuanced exploration of Esty's search for independence — much like the one Feldman embarked on all those years ago.