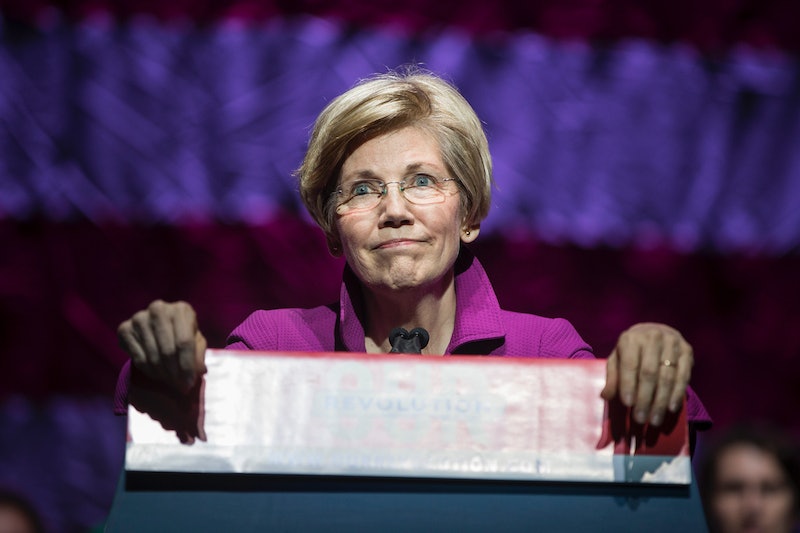 On Feb. 7, 2017, Senate Majority Leader Mitch McConnell formally silenced Sen. Elizabeth Warren on the Senate floor and inadvertently spawned a feminist rallying cry: "Nevertheless, she persisted." On the one-year-anniversary of that event Wednesday, the Massachusetts senator plans to hold a commemorative town-hall call-in to discuss how well she's done in the year that's passed since that infamous moment.

At the time that McConnell cut Warren off, she was speaking out against then-Sen. Jeff Session's nomination to be attorney general. Specifically, she read aloud what the late Sen. Ted Kennedy and Coretta Scott King previously said about Sessions. Using an obscure Senate rule that bans one senator from challenging the motivations or actions of another in a way that implies their colleague is unfit for their position, McConnell blocked Warren from finishing her speech.

"She was warned; she was given an explanation; nevertheless, she persisted," McConnell infamously said. That justification for Warren's silencing instantly took off across the internet and became a rallying call for Democratic women.

To mark the anniversary of her silencing, Warren wants to hear from her constituents (and people around the United States). Specifically, the event page says, Warren wants to know exactly how well she's "persisting." The town-hall event will take place over the phone, and will begin on Wednesday at 7:45 p.m. EST. Those interested must RSVP online with their zip code and the phone number they would like to use during the event.

While McConnell and other Senate Republicans technically were allowed to stop Warren from talking, critics felt that the move was inherently linked to sexism. This was exacerbated by the fact that Sens. Bernie Sanders and Tom Udall proceeded to read King's letter after Warren was cut off from doing so.

The letter in question was written in 1986, to oppose Sessions' nomination to a federal judgeship. In it, King lists in explicit detail why she did not believe Sessions was fit to fill the position. Ultimately, he was not confirmed. The Washington Post had already published the letter in full nearly a month before Warren was prohibited from reading it on the Senate floor.

"Mr. Sessions has used the awesome powers of his office in a shabby attempt to intimidate and frighten elderly black voters," Scott wrote at the time. "For this reprehensible conduct, he should not be rewarded with a federal judgeship."

She continued, "I believe his confirmation would have a devastating effect on not only the judicial system in Alabama, but also on the progress we have made toward fulfilling my husband’s dream."

In total, the letter was reportedly nine pages long. King addressed the letter to Congress.

After Warren was quieted, she left the Chamber and began reading the letter on a live Facebook video. To date, the video has 13 million views. "The Republicans took away my right to read this letter on the floor — so I'm right outside, reading it now," she wrote in the video's caption.

The phrase, "nevertheless, she persisted," has appeared in almost every medium imaginable since its inception into the political canon. It adorns clothing, tote bags, protest signs, mugs, and jewelry. It was near-instantaneously co-opted by the left, and gleefully thrown back in the face of those who might seek to silence women. In essence, that co-opting implied that those women who are quieted absolutely would persist when others try to stop them from openly sharing their beliefs.

What could have been a moment of shame or embarrassment, Warren turned into a battlecry for women across the country. Some have speculated whether the outcry over that moment would help spring Warren into a 2020 presidential campaign. While it's entirely too early to know if that's her intention, she certainly made the most of the catch-phrase, and this year's town-hall call-in will probably serve to keep the momentum going.