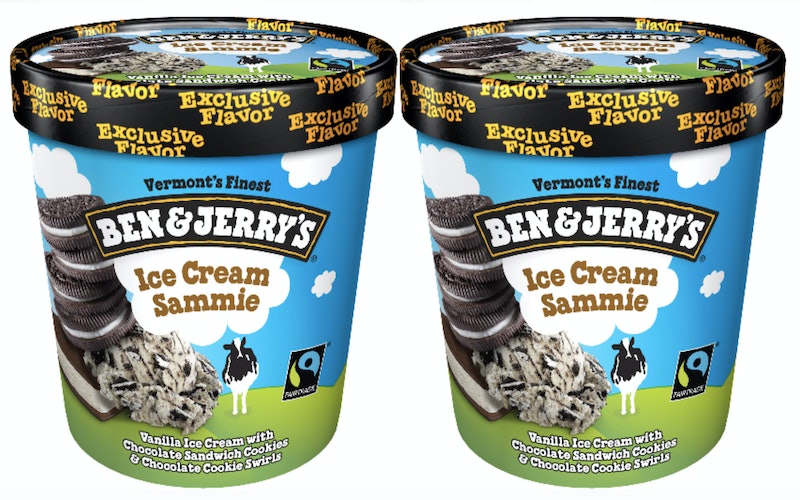 Ice cream season is less a time of year than it is a state of mind. But it doesn't hurt when the weather makes for optimal ice cream enjoyment. Picture this: It's a Friday night and you've invited some friends over to hang out in your backyard and take in the start of the most fun season. Whatever you grilled has already been gobbled up and now you're finishing the night with ice cream, naturally. Look closely or you'll miss it, because there's a new sheriff (ice cream) in town: new Ben and Jerry's flavors exclusive to Walmart just hit shelves, and they are a big summertime mood.

Initially spotted in stores by Instagrammer @thecoldhardscoop, it seems that Ben & Jerry's has been up to something sweet during the notoriously bitter cold Vermont winter. Now that the snow has melted, sweet lovers nationwide are benefitting from the culinary genius. The two new flavors have fairly different flavor profiles, yet maintain an inherent similarity in their collective cookie inspiration. The first of the two, Ice Cream Sammie, bears a striking resemblance to an old favorite: cookies and cream. If you didn't know, Ben and Jerry's actually does not have a formal cookies and cream pint, so this it pretty monumental. The Ice Cream Sammie is a base of vanilla ice cream, with pieces of sandwich cookies scattered throughout and a chocolate cookie swirl.

The other new flavor has an undeniably patriotic color palette, which should not come as much of a surprise considering the Fourth of July is not too far off. Moreover, the flavor profile absolutely SCREAMS summer. Red, White, and Blueberry is like the ice cream version of your favorite pie. Blueberry and raspberry ice creams are swirled with vanilla ice cream, and finished with strawberries and shortbread pieces. The finished product is not only yummy, but pretty. How often do you get to eat purple food?

Instagrammer @candyHunting also located the new flavors at Walmart, where they are carried exclusively, per the text on the pint lid.

Ben & Jerry's have been on a bit of a cookie kick in 2019. In January, the company released three Cookie Dough Core flavors that brought the ice cream game to an entirely new level. The general model of the cookie dough core is self-explanatory, but worth clarifying. the center of a pint is packed with cookie dough, and the rest of it is filled with ice cream.

Whether you prefer a chocolaty treat or one filled with berries (or one with a cookie dough core), it's impossible to go wrong with Ben & Jerry's, no matter how old or new the flavors are.