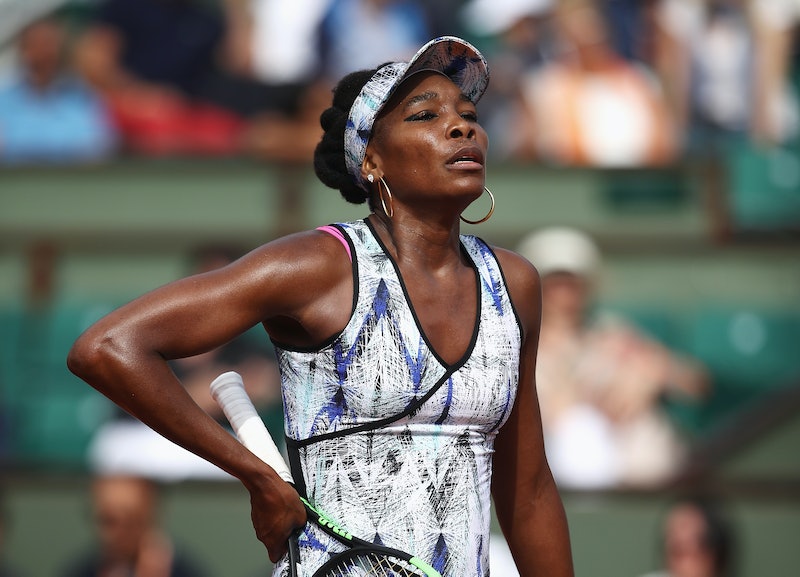 A new press release and video footage regarding Venus Williams' car crash has been shared with Bustle by the Palm Beach Gardens Police Department, and it contains new details about how the accident occurred. As reported previously, Williams was involved in a car accident on June 9 that led to a passenger in the other car dying in the hospital two weeks later due to injuries he sustained.

Williams previously spoke out about the accident on Facebook and wrote:

I am devasted [sic] and heartbroken by this accident. My heartfelt condolences go out to the family and friends of Jerome Barson and I continue to keep them in my thoughts and prayers.

According to the updated police report, Williams lawfully entered the intersection, but stopped to avoid a collision with a Nissan Altima traveling in the opposite direction that made a left turn. Then, in accordance with state law, she started to proceed through the intersection. The Hyundai involved in the crash, which was traveling west and was driven by Linda Barson, the wife of the passenger who later died, was approaching a red light in her direction and proceeded to cross when her signal changed to green. It was at this point that the front of Barson’s car collided with William’s car.

According to CNN, the victim's family has filed a wrongful death lawsuit against Williams, which alleges negligence. Barson reportedly claims that she was unable to stop in time to avoid hitting Williams' car.

Ms. Williams entered the intersection on a green light. The police report estimates that Ms. Williams was traveling at 5 mph when Mrs. Barson crashed into her. Authorities did not issue Ms. Williams with any citations or traffic violations. This is an unfortunate accident and Venus expresses her deepest condolences to the family who lost a loved one.

According to the Palm Beach Gardens Police Department, the June 9 collision is still under investigation, and no further details will be released at this time.