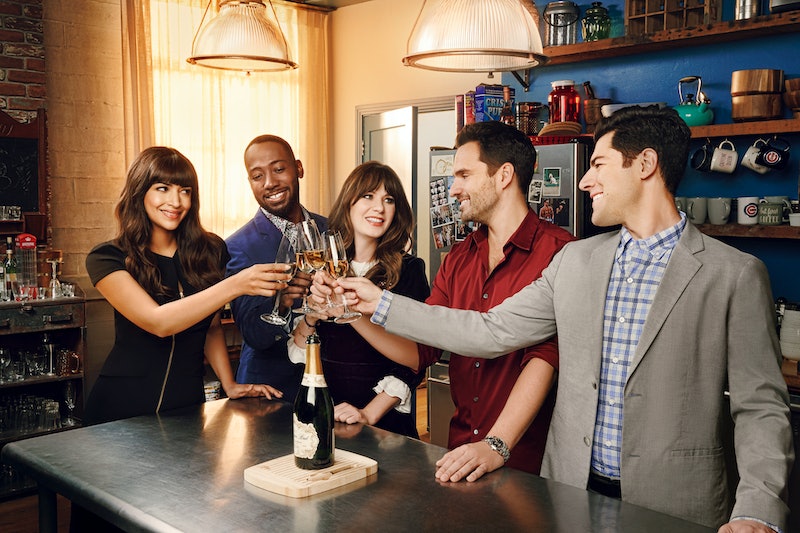 Will the second time be the charm for Nick and Jess' relationship on New Girl? Creator Liz Meriwether certainly hopes so. When the Fox comedy returns for its seventh and final season this spring, the on-again, off-again/will-they-or-won't-they couple will be officially "on" again, and Meriwether knows that didn't exactly work out the first time around. Back in Season 3, the chemistry between Nick and Jess, played by Jake Johnson and Zooey Deschanel, couldn't be ignored, and they got together. But that spark quickly fizzled out, and it became clear that New Girl didn't work as a show with them as a couple. So what happens now, after Jess confessed her feelings to Nick in the Season 6 finale and he raced after her to make out in that romantic final scene?

According to Meriwether, who led a panel for New Girl Season 7 during the 2018 Winter Television Critics Association press tour, the circumstances surrounding Nick and Jess's romantic reunion are the secret to a successful relationship this time around.

"We had a season where they were together, Season 3, and it was definitely a shift for us," Meriwether says. "The will-they-or-won't-they is so much fun and when you get two people together in a relationship and the show has to keep going, it was tough finding our rhythm again. This time around, I felt like this season is different. It feels like they're grown up. The engine of this show is this group of people as adults with kids and jobs and responsibility so it's a lot more fun to watch."

Plus, she adds, "They have such amazing chemistry and they always have."

When Season 7 picks up, New Girl will have jumped ahead three years, meaning all the characters are even more grown up. But there's still some maturing left for Nick and Jess, both individually and as a couple, before they can get their happy ending. "We come back in Season 7 and Winston (Lamorne Morris) and Aly (Nasim Pedrad) and Schmidt (Max Greenfield) and Cece (Hannah Simone) have moved on to different parts of their lives," Deschanel says. "And Nick and Jess are still traveling around the world and aren’t married and don't have kids so there's room for growth."

Nick and Jess ended Season 6 reuniting as a couple, but it's Schmidt and Cece and Winston and Aly who have progressed much farther into adulthood when New Girl returns.

"You get to see us as parents," Greenfield says of Schmidt and Cece's now three-year-old child. "Schmidt is somewhat of a helicopter parent."

"What's bigger than a helicopter?" Meriwether cuts in with a laugh, making it clear that no one is prepared to see what kind of parent Schmidt is going to be.

"He's trying to figure out a way where he can get rid of all responsibility in his life and dedicate all of his focus to his child," Greenfield adds. "He's completely enamored with this child and wants to spend every waking minute with her."

As for Winston, things have really taken a leap in his relationship with Aly during the preceding three years. "They're married and they live together," Morris reveals. "We left off Season 6 with Winston's father potentially, there was a call that didn't happen, and now JB Smoove came in and he's going to play my daddy."

But it sounds like Winston might be in for some major heartbreak this season as well: Meriwether didn't want to give away too many spoilers, but Simone accidentally let slip that "there's a death of a pretty main cast member that is pretty heartbreaking for all of us." And when asked what Winston's cat Ferguson is up to three years later after the time jump, Meriwether was tight lipped to the point where it became clear that Ferguson might be the unlucky cast member to get his swan song.

Another secret that accidentally slipped out during the panel is the reason why Nick and Jess are in suspended animation in their relationship and haven't moved forward in three years of dating. It sounds like it has something to do with Jess being stuck in a professional rut.

"He's a very successful YA author and Jess has been a witness in a federal … I don't know how much I can give away," Deschanel says before clamming up after a look from Meriwether. "She hasn't been working for a few years and she's gone on some literary tours with Nick and that's how we start the season." If Jess gets caught up in an investigation and has to go in witness protection or something along those lines and can't be a teacher, that must be extremely frustrating for someone who loves her job so much. And it also sounds like something Jess would inadvertently get caught up in.

Meriwether is so excited for New Girl fans to see the final eight episodes (the first of which premieres Tuesday, April 10 at 9:30 p.m. on Fox) since she wasn't sure if the season would even happen. "We weren't sure if people were coming back at the end of last season so we wanted it to feel like it could have ended there," she says of the Season 6 finale. "We were lucky enough to get these last eight episodes to finish it how we want to so we decided to jump forward three years in time to move things forward."

She continues, "I'm so passionate about this show; it's been my life for seven years. I did feel very good about the end of Season 6 but I wanted the chance to say goodbye to the show with a final season. I fought for the final season and hopefully it was worth it. We saw these eight episodes as a love letter to the fans. We put in a lot of easter eggs." Start brushing up on old New Girl episodes now, because apparently most of the easter eggs are deep, deep cuts. Just the way New Girl fans like 'em!