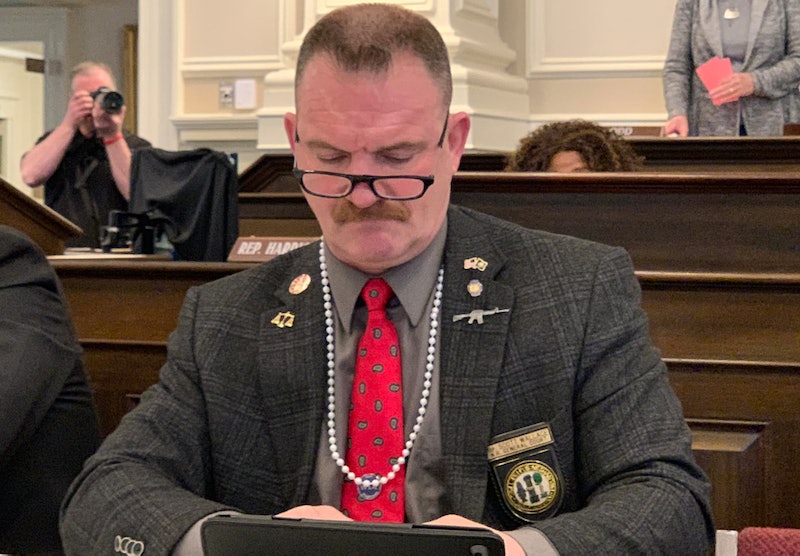 The accessories worn by certain Republicans at a New Hampshire House of Representatives hearing on Tuesday outraged many gun control activists. Multiple GOP lawmakers wore pearls to the gun violence hearing, and onlookers interpreted the choice as coded mockery implying that the gun violence victims who were testifying were "clutching their pearls." Though some gun rights advocates have disputed this interpretation, the gun control activists at the hearing were pissed.

Watts organized volunteers to testify at the hearing to advocate for a risk protection order bill, often called "red flag" legislation. The proposed legislation would give families and law enforcement the power to procure a court order to restrict an at-risk person's access to guns. Many states passed "red flag" laws after the school shooting in Parkland, Florida, last year, and Parkland officials used the law to obtain an order against the gunman's brother.

Watts told The Washington Post that at least five male representatives wore pearls to Tuesday's hearing. Given the seriousness of the topic, and the fact that some of those testifying had lost family members to gun violence, the activists did not look kindly on the lawmakers' attire.

"It really is shameful to behave that way when your constituents are being brave enough to share their stories," Watts told The Washington Post. "They clearly did not come to this hearing with open minds or compassion for their constituents."

Watts took photos of the lawmakers that quickly went viral on social media. Other activists jumped into the fray to criticize the representatives' accessories, including the father of 14-year-old Parkland victim Jaime Guttenberg.

"For some, the idea of [gun] safety is a joke," he tweeted. "For others like me, it is something we live with every day. Shame on these lawmakers." Newton Action, a gun control organization that formed in the wake of the 2012 Sandy Hook Elementary shooting in Newton, Connecticut, tweeted that the "antics" of the GOP representatives were "misogynistic."

Meanwhile, members of the gun rights organization Women's Defense League of New Hampshire (WDLNH) argued that the pearls weren't meant to offend. They maintain that WDLNH backers have worn pearls for years as a symbol of support for women's right to defend themselves with firearms. The group's president told the New Hampshire Union Leader that WDLNH began this tradition in 2016.

But Watts says she thinks the pearls were supposed to intimidate. "I fully expect backtracking," she told Talking Points Memo. "I don't expect the lawmakers, at least three of whom are up for reelection in 2020, expected it to go viral. It's not a good look." She also told the outlet that she heard a story of a Moms Demand Action volunteer who years ago felt bullied by a member of the NRA who wore pearls in a similar situation.

Even if the pearls were meant to be an innocuous show of support for gun rights, Watts thinks the representatives should have been more sensitive. "When you are a male lawmaker and you come to a hearing wearing a pearl necklace and a semiautomatic rifle pin, you sort of lose control of the narrative," she told The Washington Post. "It seems like a pretty foolish choice."