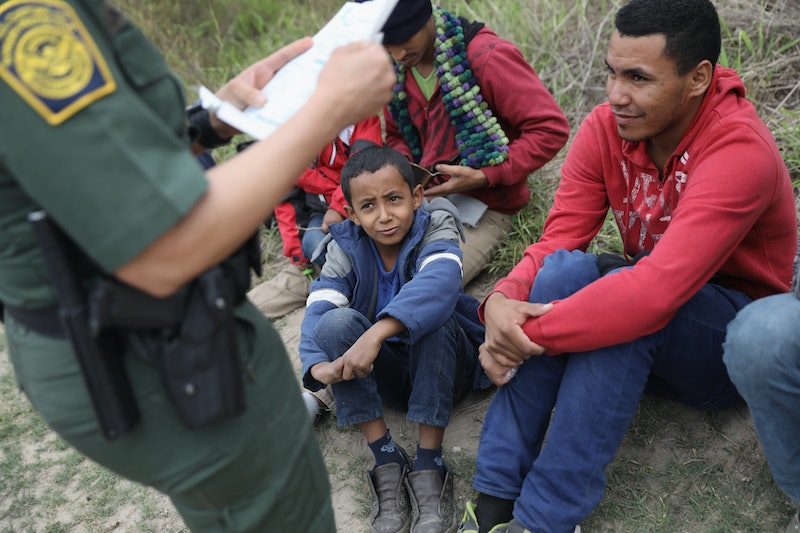 Days after widespread public condemnation spurred the president to sign an executive order ending the separation of migrant families at the border, the Trump administration has announced it's looking to establish new immigrant detention centers as it expands the use of family detention. In a notice issued Friday, immigration authorities said they were seeking information about "potential facilities" that could house up to 15,000 beds for detained families. News of the potential expansion came as the Pentagon announced it was preparing plans to house up to 20,000 migrant children on military bases

"ICE is seeking information regarding potential facilities to accommodate up to 15,000 beds, which would ideally be comprised of several service locations and/or providers," U.S. Immigration & Customs Enforcement (ICE) said in a request for information issued Friday. The location "must be within the continental United States, ideally facilities located along the southwest border within the states of California, New Mexico, Arizona and/or Texas."

Immigration authorities are scrambling to accommodate migrants detained at the border as the Trump administration continues to implement its increasingly controversial "zero tolerance" immigration policy, according to CBS News. Currently, ICE has some 3,300 beds suitable for migrant families in three family detention centers. According to the AP, federal authorities, however, have reported that roughly 9,000 immigrants — traveling as families — have been apprehended at the border every month for the last three months.

In their information request, ICE said potential family detention beds should be in state-licensed facilities that allow for open-movement of detainees and allow for educational, medical, mental health, and other programs and resources. "Housing and other structures must appear residential and child-friendly rather than penal in nature," the notice said.

But ICE's information request isn't the only sign the Trump administration is struggling to house detained immigrants. The Pentagon announced Friday that it was preparing to assist the Trump administration in accommodating immigrant children who were either apprehended crossing the border unaccompanied or separated from their families. According to BuzzFeed News, up to 20,000 children will be temporarily housed at four military bases spread across Texas and Arkansas.

In Texas, the Pentagon is reportedly eyeing Fort Bliss, the Goodfellow Air Force Base, and Dyess Air Force Base as facilities capable of housing immigrant children. In Arkansas, they're planning to use Little Rock Air Force Base. Although the children would be housed on military bases, their care would be the responsibility of the Department of Health and Human Services, according to BuzzFeed News.

But the military may soon assist in housing more than just immigrant children. According to BuzzFeed, the Pentagon said it was in the process of "conducting prudent planning and is looking nationwide at [Department of Defense] installations should [the Department of Homeland Security] ask for assistance for housing adult illegal immigrants" although a request of that nature had not yet been made.

A U.S. Navy memo recently obtained by Time revealed the military branch was preparing plans to build "temporary and austere" tent cities at bases in Alabama, Arizona, and California to serve as detention centers. According to Time, the plans included facilities capable of housing 25,000 immigrants at the abandoned airfields of Navy Outlying Field Wolf and Navy Outlying Field Silverhill in Alabama.

In California, the Navy proposed plans to house up to 47,000 immigrants at both the former Concord Naval Weapons Station and Camp Pendleton, a Marine training facility. Time reported the Navy estimated the six month cost for constructing and operating a 25,000-person detention facility would be $233 million.

Friday's memos are a sign that federal agencies are scrambling to find the space to house detained migrants under Trump's "zero tolerance" immigration policy.