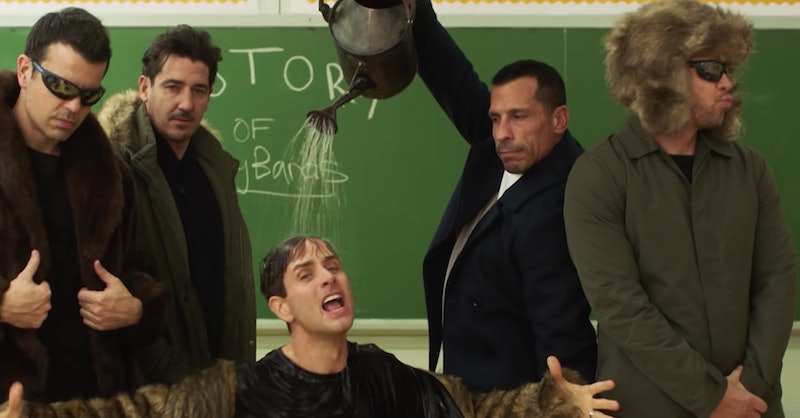 New Kids On The Block/YouTube

Boy band scholars of the world, Donnie Wahlberg, Danny Wood, Jonathan Knight, Joey McIntyre, and Jordan Knight have a pop history lesson for you. New Kids on the Block's music video for "Boys In The Band" referenced iconic boy bands from the 1970s to modern day, and gave boy band fans everywhere, and helped demonstrate why fans everywhere have loved the "boys in the band" for decades.

The group's newest single — which is part of the 30th anniversary rerelease of their iconic album, Hangin' Tough — pays homage to all of the boy bands that came before and after them, and they recruited some of their tour mates. Not only that, the song also honors Naughty By Nature and Debbie Gibson, who sings the song's hook and plays a sexy schoolteacher in the video. (Both Gibson and Naughty By Nature are also featured on NKOTB's single "80's Baby" along with Salt 'N' Pepa and Tiffany.)

And the band's current celebration of '80s and '90s nostalgia was at the forefront of their latest video, in which they recreated some of the most unforgettable boy band moments of the past forty years for the edification of Lance Bass' "History of Boy Bands" class.

But with so many references, shout outs and homages to all of the great boy bands of pop history packed into four minutes, it can be hard to catch every single one. Luckily, for all boy band aficionados out there, we've broken down all of the references and shout outs that you probably missed in the "Boys In The Band" video.

Playing off the idea of New Kids On The Block being "too old" to still call themselves a boy band, the video opens with the five members of the '80s band shuffling into the classroom rocking old man makeup and using canes and walkers. During Jordan Knight's first verse, the fivesome break out some (very slow) choreography, which longtime fans will likely recognize from their "Step By Step" music video.

Traveling back to the 1970s to kick off their history lesson, NKTOB channeled the Jackson 5 with their retro, blue and white suits, platform shoes, and step-and-point choreography. And, in true homage to the '70s supergroup, the performance featured Wahlberg on guitar, à la Tito Jackson.

New Edition got multiple shout outs in NKOTB's new video, beginning with the band members recreating the music video for "Mr. Telephone Man," one of New Edition's biggest singles. Three of New Edition's former members — Ronnie DeVoe, Ricky Bell and Mike Bivins, also known as BelBivDeVoe — also make a cameo in the video, pushing Joey McIntyre away from their pay phone and wheeling it out of the classroom. The band also gets a lyrical shout out, in the first prechorus, when McIntyre sings "If it isn't love / then why do New Editions keep on showing up?"

Naturally, a NKOTB video about boy band history has to contain plenty of homages to their own iconic career moments. During the '80s portion of the video, the band busted out the choreography from "The Right Stuff" as well as the famous "New Kids dance" from their "Hangin' Tough" video. The song's lyrics also feature not one, but two shout outs to their famous hometown of Boston, in the line about how "the boys from Boston keep on hanging tough" and later in Wahlberg's rap verse about the hometowns of some of the iconic boy bands.

At several points throughout the video, the band leads the classroom through the famous arm-waving choreography from "Hangin' Tough," both in the beginning, and then later, when the entire classroom gets up to dance along with all of the '80s icons in the room.

The vast majority of the boy band shout outs happen during Wahlberg's verse, where he raps about the history and evolution of boy bands over the years. Some of the groups he mentions include BBD a.k.a. BelBivDeVoe, Backstreet Boys, B2K (who are embarking on their own reunion tour this year), 98 Degrees, the under appreciated LFO, Menudo (where Ricky Martin got his start), short-lived British band JLS and, of course, the current biggest boy band in the world, BTS.

In addition to being a quick reference to the boy band O-Town, New Kids' reference to Orlando during Wahlberg's verse is also an important part of their homage to boy band history, as both *NSYNC and the Backstreet Boys spent their early years performing and recording in Orlando, Florida.

In addition to having Lance Bass play the teacher in the video, "Boys In The Band" features plenty of references to *NSYNC, who are the main band used to illustrate the '90s to the classroom. At one point, Wahlberg drops out of his instructional video back into the room, staring at the camera with a nod and a smile, the same way that Justin Timberlake famously did in the "Bye Bye Bye" music video.

After dropping back into the frame, Wahlberg and the rest of NKOTB channel their inner *NSYNC by recreating the marionette aspect of the "Bye Bye Bye" video. The band also threw in another reference to the '90s icons into the lyrics, shouting out *NYSNC's first single, "I Want You Back" at the end of the second verse.

Though there's no "2000s" segment of NKTOB's video, the biggest boy band of that era — One Direction, duh — earns plenty of recognition throughout the song. In addition to getting name dropped during Wahlberg's rap, 1D is referenced later in the song, with Jordan Knight singing, "Why do all directions always lead to one?"

NKOTB's final boy band reference is to the iconic British boy band, Take That, who dominated the charts across the pond in the 1990s. (You might recognize them from their Comic Relief appearance on James Corden's "Carpool Karaoke".) Paying homage to Take That's famous "Back For Good" music video, the New Kids don giant fur coats, hats and parkas to sing passionately at the students and body roll across the screen. And, in a hilarious tribute to the video's rain-filled climax, the band also pour water over McIntyre's head as he drops to his knees for "Boys In The Band"'s final moments.

And in just four minutes and fifteen seconds, the New Kids on the Block managed to educate viewers everywhere on the history of boy bands, from their inception to their current K-Pop superstardom, with plenty of references packed in every second. It's truly a boy band fan's dream come true.