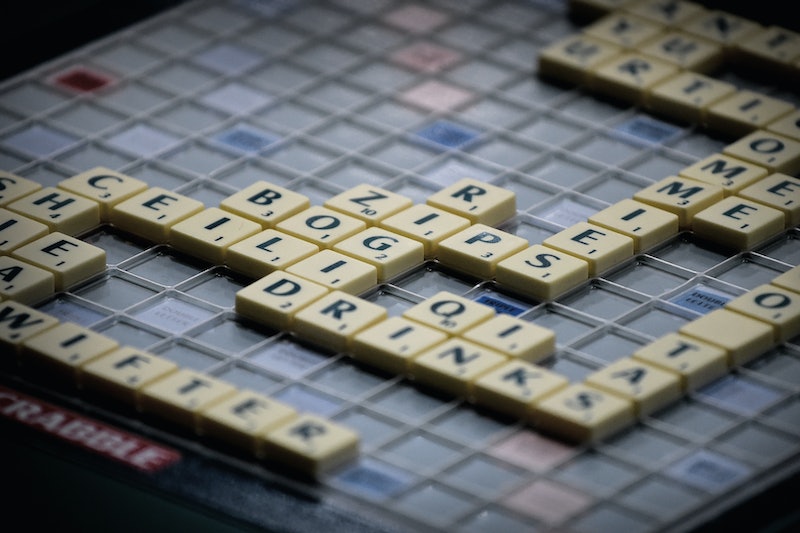 Get ready for some heated debates on etymology, usage, and style, fellow word-nerds. Nope, a new style book didn’t just get a released; this is way more fun than that. According to the Associated Press, Merriam-Webster finally released the sixth edition of “The Official Scrabble Players Dictionary,” and new Scrabble dictionary words include OK, emoji, and sriracha. The last time the Scrabble dictionary was updated was four years ago, when players saw new words like chillax and selfie. According to TIME, this latest update adds 300 new words to the Scrabble lexicon, some of which have been long-awaited by Scrabble enthusiasts.

"OK is something Scrabble players have been waiting for for a long time," lexicographer Peter Sokolowski, editor at large at Merriam-Webster, told USA TODAY. "Basically two- and three-letter words are the lifeblood of the game."

According to Mental Floss, this is a pretty small update compared to the one back in 2014 that gave Scrabble aficionados 5,000 new words. But players will see some fun new words in the latest Scrabble dictionary, says Mental Floss, like emoji, ew, facepalm, macaron, and puggle. Players will be happy to see qapik, a unit of currency in Azerbaijan, giving them yet another playable word starting with “q” that doesn't need a “u,” The Guardian reports.

“Every time there’s a word with q and no u, it’s a big deal,” Sokolowski told The Guardian. “Most of these are obscure.”

And there will be some high scorers such as “bizjet,” a small airplane used for business, and vowel-scorers such as “arancini,” which are (delicious) Italian balls of cooked rice, the AP reports. But one word Scrabble players won’t be getting this year, says the AP, is “RBI.” After consulting with competitive players who thought the word was “potentially too contentious,” Hasbro asked Merriam-Webster to leave it out. (For what it's worth, RBI, an acronym meaning "run batted in" was added to the regular Merriam-Webster dictionary earlier in September.)

According to USA Today, Springfield, Massachusetts-based Merriam-Webster consulted with the North American Scrabble Players Association when making the updates to the Scrabble dictionary. To be eligible for addition to the Scrabble dictionary, words must be two to eight letters long and already be included in a standard dictionary, Mental Floss reports. Abbreviations, capitalized words, and words with hyphens or apostrophes, says Mental Floss, are automatically ineligible.

Merriam-Webster has been the official source of the Scrabble dictionary since 1976, and it gets updated every four to eight years, the AP reports. Before then, says the AP, players consulted any desk dictionary. Not to be confused with the other version of Scrabble out there, which is produced by Collins.

“For a living language, the only constant is change,” Sokolowski told Entertainment Weekly. “New dictionary entries reflect our language and our culture, including rich sources of new words, such as communication technology and food terms from foreign languages. ‘The Official Scrabble Players Dictionary’ evolves to keep up with English as it is used today.”