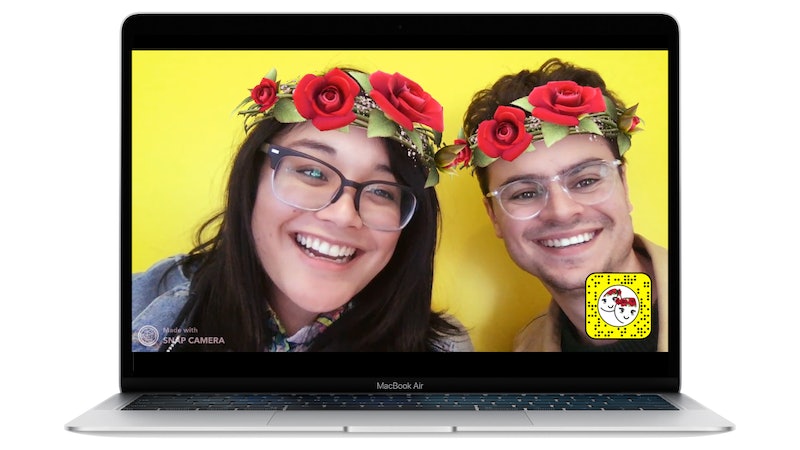 Nothing ups social media activity quite like a holiday — and in 2019, Snap Inc. has something pretty spectacular up its sleeve: New Valentine’s Day Lenses for Snap Camera are now available, letting you share the love with your favorite people at the click of a button, no matter how far away they might be. The three new Lenses fill your screen with candy hearts, bright and colorful emoji, and blooming roses — and the best part is, you don’t even need to have Snapchat itself to use them. Thanks to the separate Snap Camera app, you can access them right on your computer, with a little help from your webcam.

Snapchat Lenses have been one of Snap Inc.’s most successful launches. Originally introduced in September 2015, they quickly went viral for their unique augmented reality capabilities; in a pre-Pokemon Go world, being able to puke rainbows or turn yourself into some sort of demon creature was truly a novel experience. And that success was palpable; according to Statista, Snapchat’s number of monthly users shot to 301 million in 2016 (e.g. shortly after the Lenses launched) — up from just 180 million monthly users the year before. Talk about some extreme growth, even if it hasn't quite maintained that pace since then.

Given the enduring success of this one feature, it would make sense that Snap Inc. might try building other products around it — including a way to get people who might not necessarily be Snapchatters using it. Ergo, Snap Camera: A standalone app for desktop and laptop computers that lets you plop Lenses on top of your face via your webcam pretty much whenever you want — no Snapchat account required. Launched in October 2018, Snap Camera is compatible with most apps that utilize webcams — streaming platforms like Twitch, video conferencing services like Google Hangouts and Skype, you name it — which, in today’s YouTuber/Twitch streamer market, has made for some, uh, interesting results. As with Snapchat proper, Snap Camera’s Lenses can be acquired from the Lens Studio, which showcases a huge number of Lenses made by users all over the world.

New Lenses are arriving all the time — both created by users and launched by the company itself — and for Valentine’s Day, Snap has launched three brand-new ways to transform your face while you talk to your favorite people. First, there’s the candy heart Lens:

This Lens surrounds your face with digital Conversation Heart-type candies — and what’s more, it’s interactive: When you touch one of the candy hearts, it broadcasts that heart’s message across the screen, larger than life.

A second lens fills your screen with a cloud of different heart-shaped emoji (with a few other cheerful shapes thrown in, like stars and pink-cheeked, smiling faces); the words “Your smile is everything and I love you” also appear on the bottom of the screen.

And if you’re fan of Snap’s classic flower crown lens, there’s a brand-new version of it available now:

This special edition features red roses — a Valentine’s Day mainstay since the Victorian era — that bloom slowly over the course of a few seconds.

Each Valentine’s Day Lens also has a Snapcode you can use to unlock it directly in Snapchat.

To use Snap Camera, all you have to do is download it here and install it, then open up whatever app you want to use it with and select the Snap Camera feed as the camera output. Info on how to use Snap Camera while streaming on platforms like Twitch can be found here and here.