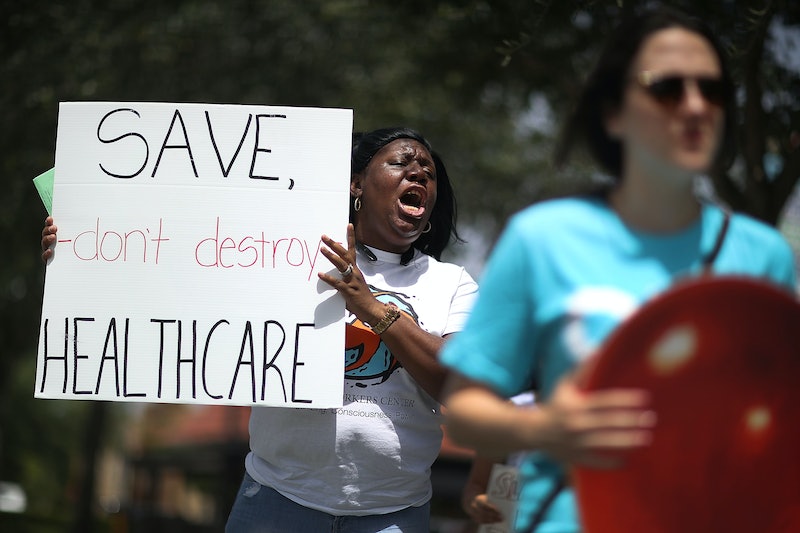 A survey released by Gallup and a nonprofit called West Health on Tuesday reveals some startling new statistics about U.S. health care costs. According to an analysis by The New York Times, the survey reveals that Americans collectively borrowed an approximate $88 billion in the last year to cover various health care payments. And if that isn't alarming in itself, the survey provided a number of other statistics that relayed just how expensive it is to stay healthy in America.

According to USA Today, the poll by Gallup and West Health was conducted from Jan. 14 to Feb. 20 with 3,537 adults, and contains results from 2018. West Health, one of the research partners, is a nonprofit that aims to lower health care prices for people across the country.

Per the survey, one in four Americans has skipped a health care treatment because they didn't want to incur the cost. Additionally, though the findings reveal that 48 percent of Americans believe U.S. health care is among the best in the world, around that same amount of Americans (45 percent) say they're afraid of going bankrupt due to a health scare. There was one more finding that many people might find particularly interesting: support of the health care system in America is a deeply partisan issue.

According to the survey, 67 percent of Republicans said health care in the United States is among the best in the world, while only 38 percent of Democrats felt the same way about the state of health care in America.

However, according to The New York Times, there is another angle of the survey that reflects a concerning sentiment among a majority of those polled: the lack of optimism in the ability of America's leaders to solve the health care "problem." Per the publication's analysis of the full survey, 70 percent of respondents said they had no confidence their elected officials would be able to bring health care prices down, and 77 percent noted their concern that health care specifically would hurt the nation's economy.

This is particularly notable, given that most, if not all, of the Democratic candidates running for president have made health care one of their primary campaign issues. And to the people who conducted the survey, there appeared to be serious implications from the results.

To The New York Times, Dan Witters, a senior researcher for Gallup, said, “Our data shows an American public that’s beaten down from this really serious issue." Similarly, Tim Lash, chief strategy officer for West Health, said to The Times, “When we’re talking about health care and the debate right now, it usually bifurcates between the financial impact of health care or the health outcomes themselves ... But those two things intersect at access."

The full results of the survey are available for you if you fill out a contact form, per Gallup. Per The New York Times, Gallup and West Health have both confirmed their intent to conduct similar studies in the coming years.

More like this
19 Latinx Therapists & Mental Health Experts To Follow On Instagram
By Kaitlyn Wylde, Naydeline Mejia and Lexi Inks
Here’s Everything You Need To Know About Operation London Bridge
By Bustle UK
How To Watch The Queen's Funeral
By Bustle UK
These 2 Women Could Be America’s First Lesbian Governors
By Tess Garcia
Get Even More From Bustle — Sign Up For The Newsletter