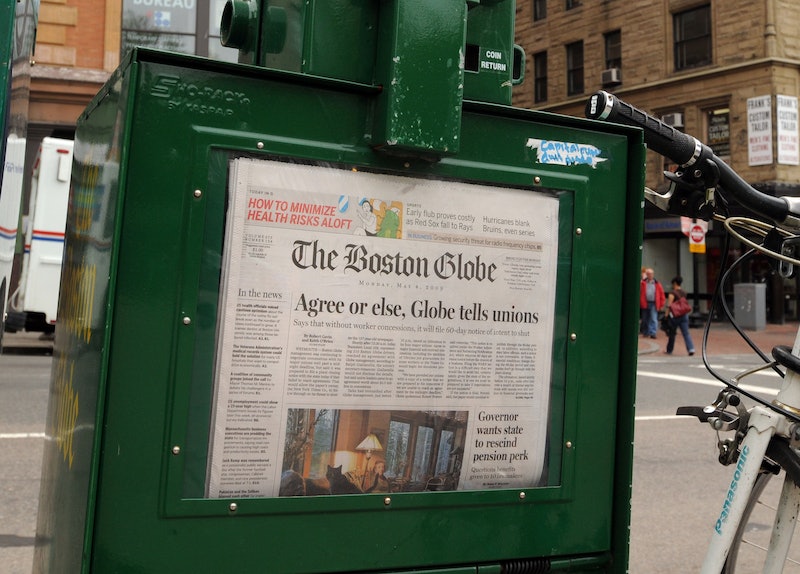 Media outlets across the country banded together on Thursday to push back against President Donald Trump’s consistent claims that the media is “the enemy of the people.” More than 300 national newspapers sent a clear message to Trump by publishing editorials that take down the president's claims of “fake news” and explain the role of the free press in American society.

Marjorie Pritchard, the editorial page deputy managing editor atThe Boston Globe, lead the movement. She asked editors across the nation to join the Globe editorial board in defending themselves against the Trump administration’s constant attacks. Those attacks include the president calling the media “fake, fake, disgusting news” at a rally in August, as well as targeting specific news organizations such as MSNBC, CNN, and The New York Times.

Papers of varying sizes, in states that went both for and against Trump in 2016, joined in the efforts to highlight the positive work journalists do, NBC News reported.

In a tweet responding to the array of editorials published by newspapers on Thursday, Trump leaned way into the criticism. “THE FAKE NEWS MEDIA IS THE OPPOSITION PARTY. It is very bad for our Great Country,” he tweeted Thursday morning, adding: “BUT WE ARE WINNING!”

Annah Backstrom Aschbrenner, the former news director of The Des Moines Register, explained the line between opinion and news pages of a paper during an interview with Iowa Public TV.

“An editor once said to me: The news pages tell you how things are and the editorial page tells you how things should be," Backstrom Aschbrenner said.

Papers like The Globe used that opinion section to speak to their readers about the importance of journalism in a world where politicians are constantly telling lies:

“The greatness of America is dependent on the role of a free press to speak the truth to the powerful. To label the press 'the enemy of the people' is as un-American as it is dangerous to the civic compact we have shared for more than two centuries.”

Even a Kansas paper that endorsed Trump during the 2016 election cycle published an article denouncing the way Trump speaks about the media, CNN reported.

“No one will be happy all the time with what a journalist or news outlet produces,” the Topeka Capital-Journal’s editorial board wrote. “But being called an enemy — and not of a politician or cause, but of the whole people of a nation — that’s something else entirely. It’s sinister. It’s destructive. And it must end now."

Although many papers wrote passionate pieces defending the art of reporting and defending the truth, some publications opted not to participate in the collective effort to defend the press. Some even decried the movement. Standouts included The Wall Street Journal and Politico. The Journal wrote an article that criticized the mass editorial efforts and defended the president’s right to free speech. Meanwhile, Politico’s senior media writer, Jack Shafer, said the idea would just give Trump more fodder for criticizing the press.

“It will provide Trump with circumstantial evidence of the existence of a national press cabal that has been convened solely to oppose him,” Shafer wrote.

Although it’s hard to prove that Trump’s rhetoric about the press has deterred support for media outlets, surveys say that people aren’t happy with media. A June Gallup/Knight Foundation survey showed that American adults think that more than 60 percent of news is biased and estimate that 44 percent is flat-out inaccurate.

It’s hard to know whether this spirited batch of editorials will convince readers to trust the media or push people further way. But it was a bold move for the media to make themselves the story, using the press to defend freedom of it.