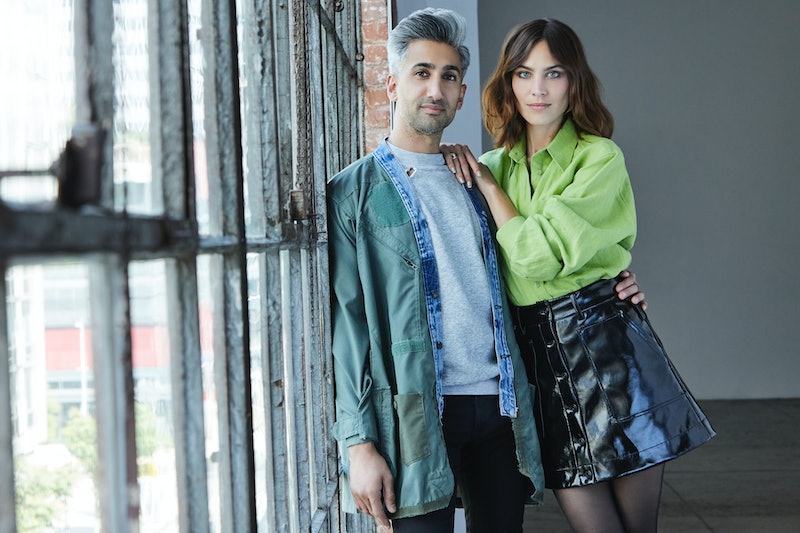 Whether he's giving the Queer Eye heroes a new look or making over comedians for his YouTube series Dressing Funny, Tan France doesn't pull any punches when it comes to giving style advice. Now, he's bringing his unfiltered opinions to Netflix's Next in Fashion, a new Project Runway-style competition series he hosts alongside British designer and model Alexa Chung. Because the show is all about looking for the next big thing, we asked France to weigh in on all the 2010s trends he wants to ditch in the new decade — and the few he wants to stick around.

First on his kill list? Throwback '80s and '90s fashion. That includes the hotly debated leggings-as-pants fad, which France admits he's always been over. "I feel bad saying this because most of America does this... [but] there's got to be something else that we can choose," he tells Bustle. "A jean! For f*ck's sake, a jean! A nice trouser, a skirt, anything other than a legging!"

Read on for the rest of France's hot takes on fashion, and find out which item in your closet you should donate immediately.

If there's one thing that bothers France about a trend, it's when it's not body inclusive. "Here's the thing about biker shorts," he says. "I think that they are very exclusive. If you have [a] basic model body, you get to wear them [and] you get to feel good about yourself. However, I think that it makes people who don't have that body — and I'm one of those people — feel kind of sh*tty and it makes you feel insecure. So I would like them to go for that reason."

When done right, France is a fan. "I actually love the tiny sunglasses. You have to have a certain vibe to pull it off and it takes a lot of confidence to be able to rock the sunglasses," he says. "I can't wear them, but I think they're wicked if you can rock it."

"The only person, in my opinion, who can continue to rock those, because she's obsessed with micro purses in general, is Gigi Hadid. Everybody else is like, 'You can't fit anything in there!'" France says.

"I don't love an over-the-shoulder fanny pack," the style guru shares. "And I think I'm over fanny packs [in general]. I like that they had a moment, but I always knew it was going to be [just] a moment.'" Always a trend, never a classic.

If you want to rock one, don't show France your look. "[I've] always hated a bucket hat," he says. "And I know that all the cool kids wear them. Alexa Chung and I totally disagree on this. She loves a bucket hat."

Call them unnecessary throwback fashion. "I think it's fine, but I don't see why they needed to come back. Like, didn't we move on? Isn't there another option?" France says.

The jury's out on this one. "I don't have a firm answer on capes," France admits. "If it's for a red carpet look, I think you could look wicked. If it's for everyday life, where are you going where you might need a cape? I want to know your life."

"I like a platform sneaker in moderation," he says. "It makes its way back every decade. I'm done with the Stella McCartney platform, but there are other versions that I think are good."

These can stay! "I love a cropped pant," France says. "I think a cropped pant is a classic. It's like a buttoned-up white shirt — it will always be a thing."

France loves this one not so much for its trendiness, but for its practicality. "I eat a lot of baked goods. That's just a fact. My body isn't Antoni Porowski's body," he says. "And so the high-waisted pants are a godsend. I don't wear Spanx, I don't wear a girdle, so my high-waisted jeans do the job."

It's a hard no from France. "I'm hoping that's going to last 20 minutes and we're over it again," he says. "If it's a '70s jean, OK, I can make my peace with that. When it's a bootcut situation, like no. Nobody wants to screw you in that. And it's your choice to be celibate. You're choosing for no one to f*ck you."

More like this
Bella Hadid Will Think Of Her Spray-On Dress From Paris Fashion Week “Forever”
By Brad Witter
Zendaya’s Sheer Valentino Look Won Paris Fashion Week
By Dominique Norman
On 'The Handmaid’s Tale,' Christine Ko Fights Back
By Gretchen Smail
Nicola Coughlan Channelled 'Bridgerton' Chic At London Fashion Week
By El Hunt
Get Even More From Bustle — Sign Up For The Newsletter