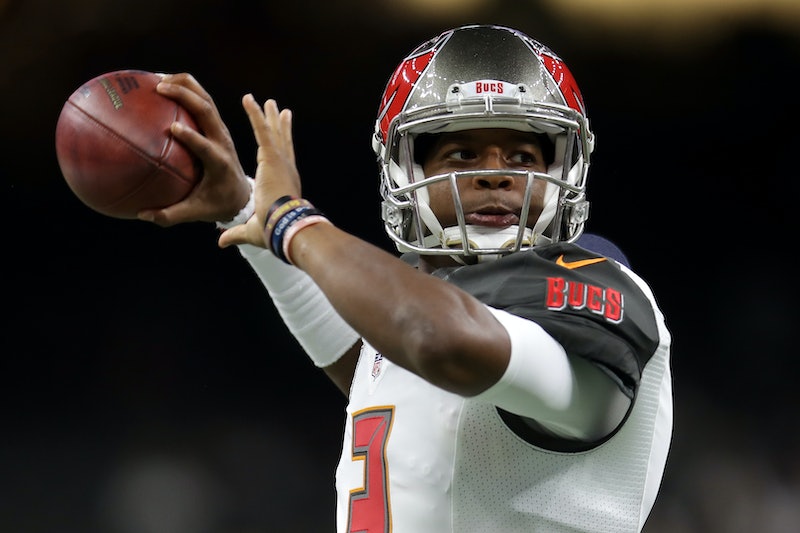 On Thursday an NFL football player made a lot of people upset when he visited a Florida elementary school on Wednesday. While giving a speech to third graders, fourth graders, fifth graders, and their parents, Tampa Bay Buccaneers quarterback Jameis Winston told girls to be silent and polite.

Apparently the reason for the football star's appearance at the school was to speak to the kids about his three rules of life, which are God, school, and "I can do anything that I put my mind to." However, things took a weird turn when he began addressing the boys in the room directly, saying,

... But the ladies ― they’re supposed to be silent, polite, gentle. My men, my men supposed to be strong. I want y’all to tell me what the third rule of life is: I can do anything I put my mind to. Scream it!

Obviously, this is insane. Categorizing boys and girls as strong versus silent because of their gender is outrageous and wrong and never, ever OK. The whole point of Winston being there was to encourage the kids at the school and empower them. Instead, he boiled their personalities down to harmful gender stereotypes.

In an apology, he admitted he had used a "poor word choice," saying,

I was making an effort to interact with a young male in the audience who didn't seem to be paying attention, and I didn't want to single him out, so I asked all the boys to stand up. During my talk, I used a poor word choice that may have overshadowed that positive message for some.

Unfortunately, this was not actually a case of poor word choice. This was a case of someone with a lot of power and responsibility presenting the opinion — albeit accidentally, as he claims — that boys should be strong and girls should be polite and quiet.

The incident especially does not reflect well upon Winston, as he has been accused of sexual assault. Fellow Florida State University classmate Erica Kinsman filed a civil complaint against Winston accusing him of "sexual battery, assault, false imprisonment, and intentional infliction of emotional distress arising out of forcible rape" from an alleged 2012 incident.

Winston denied the accusation during a 2014 disciplinary hearing, and released a statement saying,

She willingly engaged in multiple sexual acts with me with her full knowledge and consent. I did not rape or sexually assault [Kinsman]. I did not create a hostile, intimidating, or offensive environment. In the short time period that we were together [Kinsman] had the capacity to consent to having sex with me, and she repeatedly did so by her conduct and verbal expressions.

Winston was not formally charged, but the university did settle with Kinsman as part of a lawsuit claiming they mishandled her case.

Regardless of Winston's past, his comments directed at the young girls listening to his speech are inexcusable. Just like the boys in the crowd, they should have been encouraged to feel empowered, too.