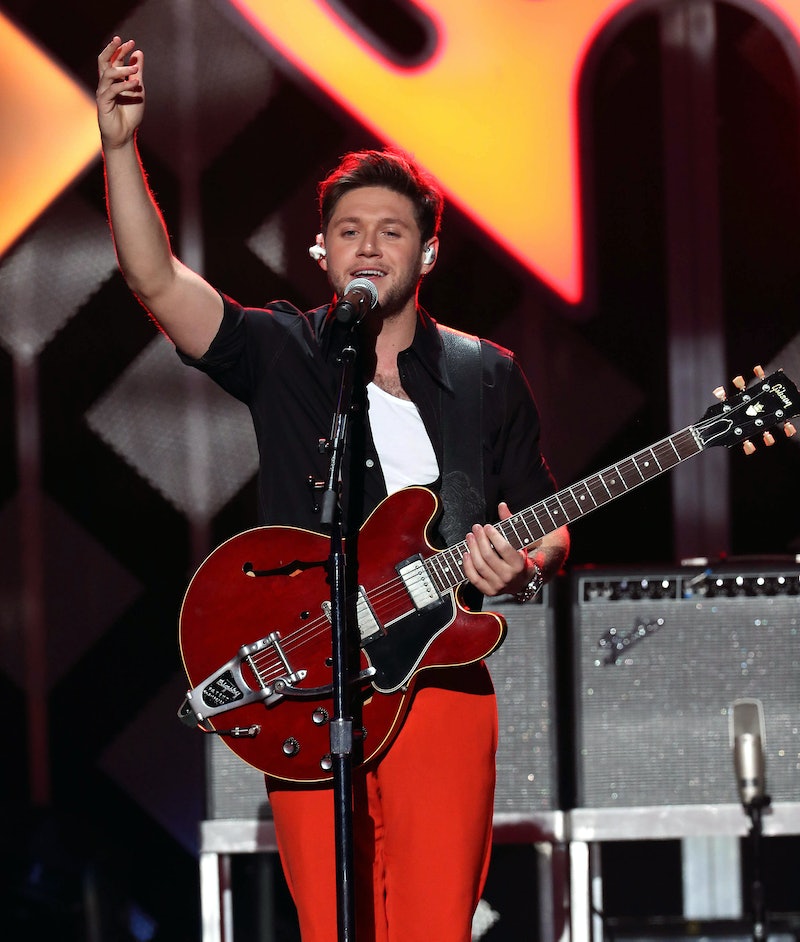 Niall Horan certainly made the most of his first stint as a musical guest on Saturday Night Live. Niall Horan's SNL performance on the Dec. 14 episode will get all of his fans' heart fluttering instantly, as he played his new single "Nice to Meet Ya" for the first time on U.S. television. But he didn't just stand there and sing. The singer also appeared in a skit that will make fans see the One Direction alum in a completely new light.

For his first solo appearance on the show, Horan strapped on an electric guitar and hit the Studio 8H stage to perform his newest single, "Nice to Meet Ya," playing a faithful rendition of his rock-'n'-roll-infused track against a backdrop of flashing lights. But it was the singer's light pink suit (not unlike one that his former One Direction bandmate Harry Styles would wear) that truly had fans talking. Viewers were absolutely loving his refreshing outfit, giving his new look tons of praise.

After his first performance, Horan unexpectedly appeared alongside the episode's host Scarlett Johansson in a hilarious skit. Actor and SNL cast member Cecily Strong played the ghosts of strippers past, who haunt a motel hot tub every Christmas and tell stories from their strip club days in the '70s, but in song.

Horan joined them as the late owner of the club they worked at, as they sang about how they first met... and how they all died. He looked nearly unrecognizable while smoking cigarettes in a shaggy wig, with sideburns as long as Elvis Presley's. But he stayed dedicated to the role, accent and all, proving that the singer actually has some comedic chops.

For his final act on SNL, Horan slowed things down a little bit and gave the show a warm and intimate moment. Sitting atop a grand piano, the singer gave the debut performance of his heartbreaking new ballad, "Put a Little Love on Me." Although he was no longer donning his fan-favorite pink suit, his raw and emotional vocals assured that there was no dry eye in the SNL audience.

Between his two mesmerizing performances and a surprise skit on Horan's first solo SNL appearance, what more could fans ask for?

More like this
'School Of Rock' Changed Joe Keery's Life Forever
By Alyssa Lapid
Twitter Is Freaking Out Over Rihanna’s 2023 Super Bowl Halftime Show Announcement
By Stephanie Topacio Long
Everything To Know About Taylor Swift’s 10th Studio Album, 'Midnights'
By Grace Wehniainen and Jake Viswanath
Is Dua Lipa Dating Trevor Noah? New Photos Show Them Kissing & Hugging
By Brian Anthony Hernandez and Martha Sorren
Get Even More From Bustle — Sign Up For The Newsletter