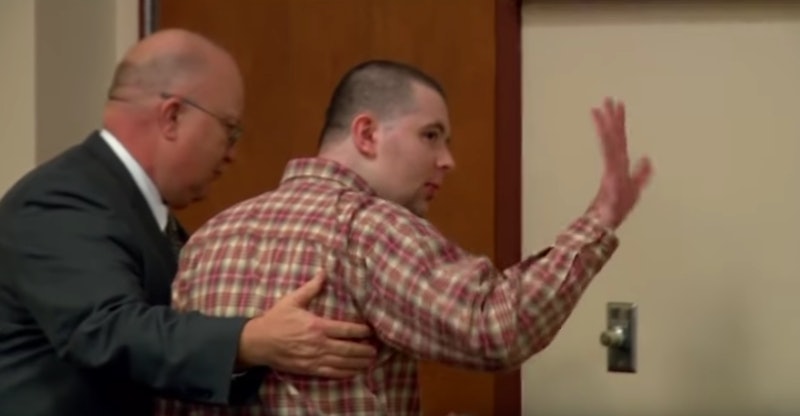 Patch reported that police also found a large knife in Godejohn's pocket, so they charged him with carrying a concealed weapon and disorderly conduct. Those charges could have come with a year of prison time and $11,000 in fines, but one of the charges ended up being dropped later. FOX6 News reported that Godejohn pleaded no contest to the disorderly conduct, but that the concealed weapon charge was dropped by prosecutors. Godejohn paid a fine (the sum was not disclosed) and turned the knife over to the police.

During this time, Godejohn and his eventual girlfriend, Gypsy Rose Blanchard, were actually already talking online — they just hadn't met in person yet. It's unclear if Godejohn talked with Blanchard about his legal issues, but they were about a year into their online correspondence when the arrest happened, as according to ABC News, they began chatting on a Christian dating site in 2012. However, the two did not meet in person until 2015, shortly before the two planned the murder of Dee Dee Blanchard, Gypsy's mom.

As Gypsy has said in multiple interviews, she wanted to get away from her mother, who experts now believe had Munchausen syndrome by proxy, a disorder in which a caretaker makes up or induces an illness in someone under their care. Gypsy and Godejohn planned Dee Dee's murder, with Godejohn carrying out the actual killing. Gypsy pleaded guilty to second degree murder in 2016, and she is currently serving a 10 year prison sentence. Earlier this year, Godejohn was sentenced to life in prison without parole.

Because the crime was committed in Missouri, that's where both Gypsy and Godejohn are serving their sentences. That puts Godejohn about 450 miles away from his Big Bend, Wisconsin home where he and Gypsy were initially arrested for the murder. According to inmate records, Godejohn is currently 29 years old. You can see his mugshot from earlier this year below:

Godejohn is located at the Fulton Reception and Diagnostic Center, a maximum-security men's prison in Fulton, Missouri. He was officially charged with first degree murder and armed criminal action. He can't apply for parole, so he'll wait out his days in prison. Meanwhile, Gypsy is due for parole in 2024, when she'll be 32. So she's already halfway through her sentence.

Godejohn's arrest at McDonald's doesn't have anything to do with his murder case, but it's something that is often brought up in conjunction with it. He may not have served any jail time for that incident, but he's certainly well acquainted with the prison system now — and he will be for the rest of his life.