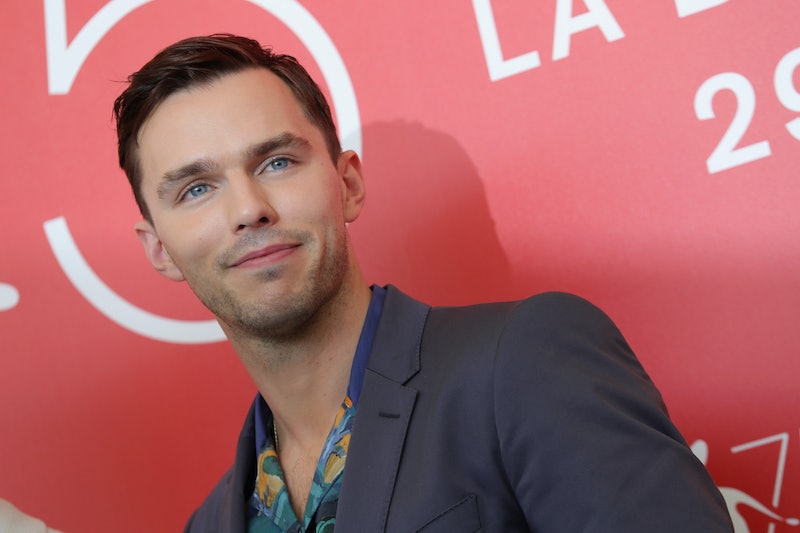 Ever since appearing as the boy in About A Boy, Nicholas Hoult has been making a splash in the acting world. Over the last decade, the former Skins actor has starred in quality films at a rate of about a mile a minute, securing his place as a poster boy for British male actors. And his latest role — the role of parent — is pretty major. Nicholas Hoult's comments about fatherhood are cute AF.

Yes, this time round, it's not his acting that is going to have you welling up, it's his comments about being a dad. Grab a box of tissues y'all, it's about to be lit. In April last year, Hoult and his partner Bryana Holly welcomed their very own sweet baby angel into the world, according to People. Awwwww. And The Favourite actor has being super open about how much being a parent changes absolutely everything. He spoke to the Evening Standard Magazine about what it feels like:

"Having a baby puts you in this place where you go, oh, okay, this human is going to change a lot. It makes you value time differently, which is why I talk very quickly in interviews now, because I need to get home to them."

The Standard reported that the actor "is keeping the child’s gender secret, at least for now." He told the magazine: "Someone will find out soon enough and that’s fine, no big deal, but for now it’s my own precious little thing and I’m keeping it."

And obviously Hoult had to address the whole exhaustion thing that parents go through:

"The levels of tiredness are extreme. No one warns you about it! But the level of love that comes with it outweighs everything. It’s phenomenal. I’m loving it. And it evolves all the time. They change so much, every day is different. It fills you up as a human completely."

He spoke also about starring in The Favourite and how much he enjoyed the whole process. He loved reading a period piece that, for the first time, actually brought the LOLs.

"I’ve never read a period drama that was fun," he said. "They can be a bit of a slog. Sometimes there are incredible stories and incredible people but the dialogue can be really dry. But pretty much every line I get to say here is a dream. So that’s brilliant."

Hoult played the dastardly leader of the Tory party, Robert Harley. His look was very much the dandy side of things, with huge wigs and all the beauty spots. The film is doing pretty darn well in the cinemas, with the critics, and at the award ceremonies, and it's one to watch if you love a giggle.

With all this Hollywood success and a little bundle of joy at home, 2019 is set to be a pretty good year for Hoult.