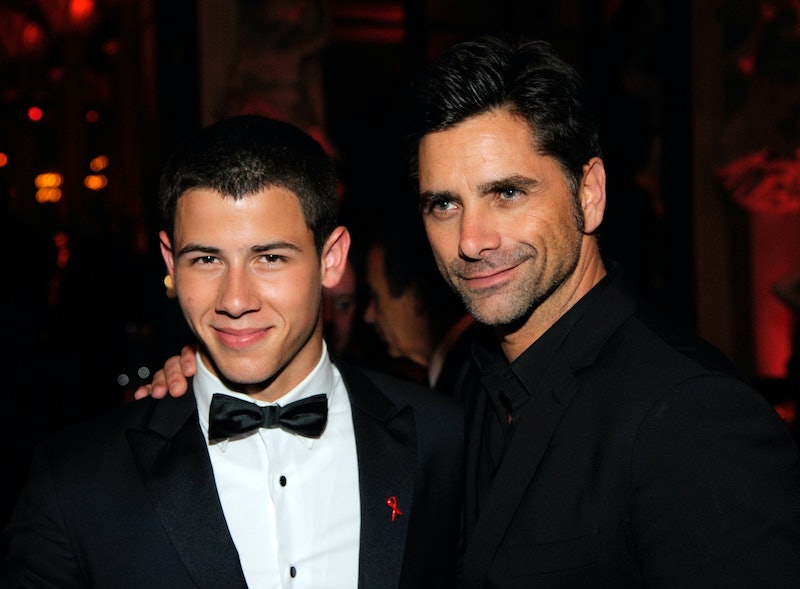 Ever since they dropped their first single after a six-year hiatus last week, there's been so much buzz about the Jonas Brothers, and it's no surprise that John Stamos is getting in on it, too. After all, there's been quite a love fest going on between him and Nick Jonas lately... and now, he's kicking it up a notch. On Wednesday, Stamos shared his appreciation for Jonas in a new Instagram, and not only is it adorable, but it's also kind of hilarious.

In the photo, Stamos is laying down, pretending to sleep next to a pillow, which features a photo of Jonas who's wearing a T-shirt of Stamos wearing a Jonas Brothers T-shirt — if you can follow all of that. This is clearly a running joke they've had going on for a long time, and Stamos' Instagram post is just the latest installment of that. And actually, it might be the best one so far.

"I had the craziest dream last night..." Stamos wrote in his caption, hashtagging "#sucker," the name of the new single that the Jonas Brothers released on Friday. Because if there was ever a time to keep that joke running, it's now, when the band is making their comeback.

And of course, Jonas commented on the photo, because after seeing something like this, how could you not? He kept it simple, but still managed to say all that needed to be said.

This all started back in October 2018, when Stamos rocked a Jonas Brothers shirt from their 2009 tour on the red carpet at the American Music Awards. When he talked to Entertainment Tonight on the way in, he told them he was the fourth Jonas brother, which would be amazing if true (although technically, he would be the fifth Jonas brother, because they already have a fourth, and his name is Frankie). "I love those guys," Stamos said.

Earlier this month, Jonas decided to take matters into his own hands and show the love to Stamos right back. He took to Instagram to show off a photo of himself wearing a shirt featuring a picture of Stamos wearing his Jonas Brothers shirt. "It's your move," he wrote.

And now, Stamos has officially made his move. So will it end here? It's hard to say. After all, there have already been two rounds of T-shirts, and now, it's been expanded to a pillow. So what's next? With the Jonas Brothers back on the scene, anything is possible. Could Stamos surprising fans on stage when Jonas and his brothers are touring again be in our future? Wilder things have happened... and it would be pretty cool to see.

Whatever happens next, chances are good that it'll be just as entertaining as watching the rest of this hilarious saga unfold. Whatever the reason is that these two love each other so much, it doesn't matter — just as long as the rest of us get to see them show their appreciation for each other on Instagram.