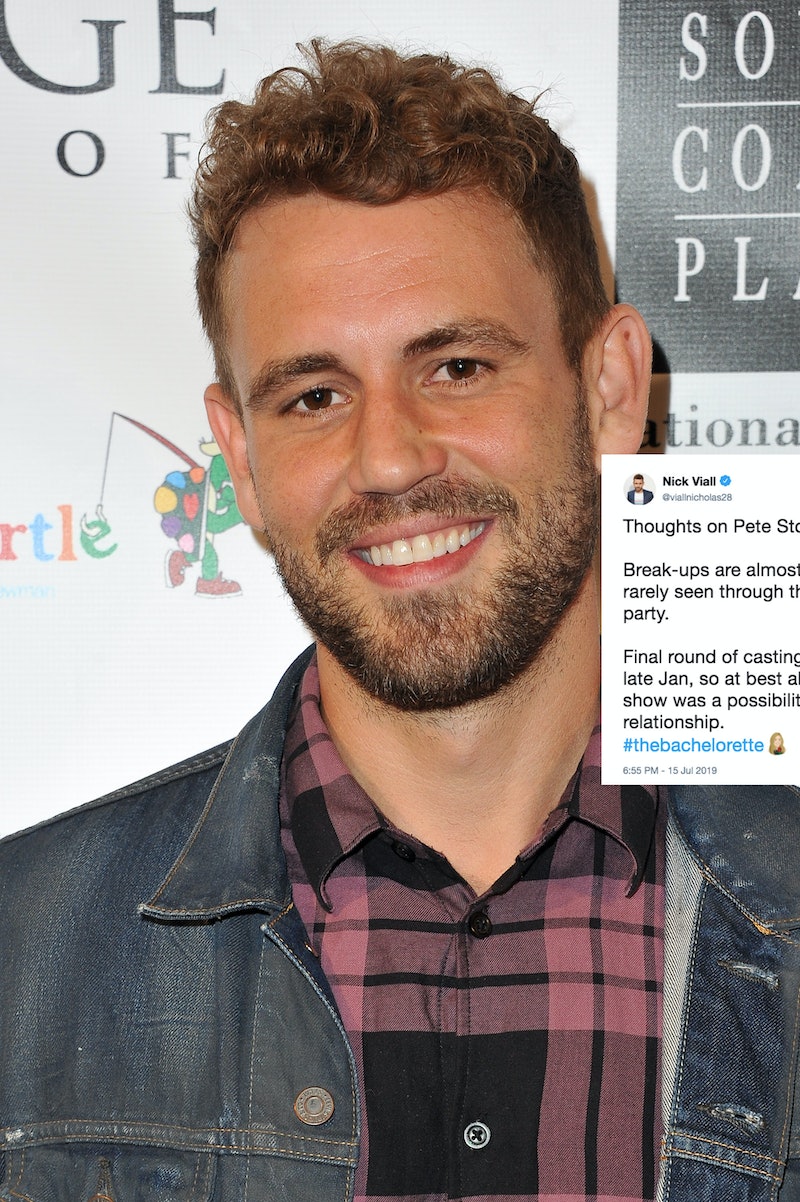 Most Bachelorette viewers have been rooting for Pilot Pete this season. That's why it was so surprising when his recent girlfriend did an interview, claiming he dumped her to go on the show. Now, Nick Viall is defending Bachelorette contestant Peter Weber in multiple social media posts.

Yes, believe it or not, one of the least problematic contestants of the season is in the hot seat right now. Peter's ex-girlfriend Calee Lutes discussed their relationship in a July 15 interview with Entertainment Tonight. She claimed,

"He absolutely betrayed me. He interviewed for a reality dating show while simultaneously planning a future with me. I trusted him entirely and he pulled the rug out from under me. Also, if all of this wasn't bad enough, I've had multiple people reach out to me and tell me that he was seeing other women while we were exclusive."

Peter is still a contestant on The Bachelorette, which means he hasn't yet done an interview in response to his ex's claims. However, he does have support from a two-time Bachelorette contestant and former Bachelor lead. (Bustle reached out to ABC for comment on the situation.)

Nick shared his reaction in a series of tweets on July 15. He pointed out, "Break-ups are almost always messy and rarely seen through the same lens by each party." In the same tweet, the franchise veteran also revealed, "Final round of casting doesn’t happen until late Jan, so at best all Peter knew was the show was a possibility when he ended the relationship." It should be noted that Peter's ex said he ended their relationship in December 2018.

In another tweet, Nick discussed the nature of breakups. He wrote, "People who get broken up with almost always feel betrayed." He also theorized, "Everyone reading this text has probably broken up with someone they once said i love you to." Essentially, he reminded us all that both parties in a breakup usually have their own version of the story.

And just for good measure, Nick emphasized, "But 1 things is clear. They broke up." Could that be a dig at Bachelorette contestant Jed Wyatt? In a June interview with People, Jed's ex-girlfriend Haley Stevens claimed that they were still dating when he went on the show and that they intended to resume their relationship after filming.

Just like Pete, he cannot do interviews until his time on the show is over, but on July 8, Jed told his Instagram followers, "Please know I’m not able to answer right now, but as soon as I’m able to, I will."

Nick may have been alluding to Jed's drama with that one tweet, but he directly addressed it with another one. Nick pointed out the differences between Pete and Jed's situations, claiming, "Pete was scouted, he didn’t apply," which implies that Jed submitted himself to be on The Bachelorette.

And, of course, there's a major (rumored) difference between these two guys. Nick wrote, "Peter was single when he went on the show/ From what we can tell Jed was not."

Nick had so much to say about this that he addressed it on not one, but two different social media platforms. In an Instagram Story, he described the situation as a "silly non story."

Ultimately, Nick focused on one point: "Jed went into [the] season with a girlfriend. He didn't break up with her. He lied to Hannah."

That After the Final Rose special is going to be very interesting. Hannah probably isn't the only one who will have to discuss previous relationships with Chris Harrison. And even if Jed and Peter don't discuss their exes in that interview, they probably will eventually, right? Or at least that's what fans are hoping for.