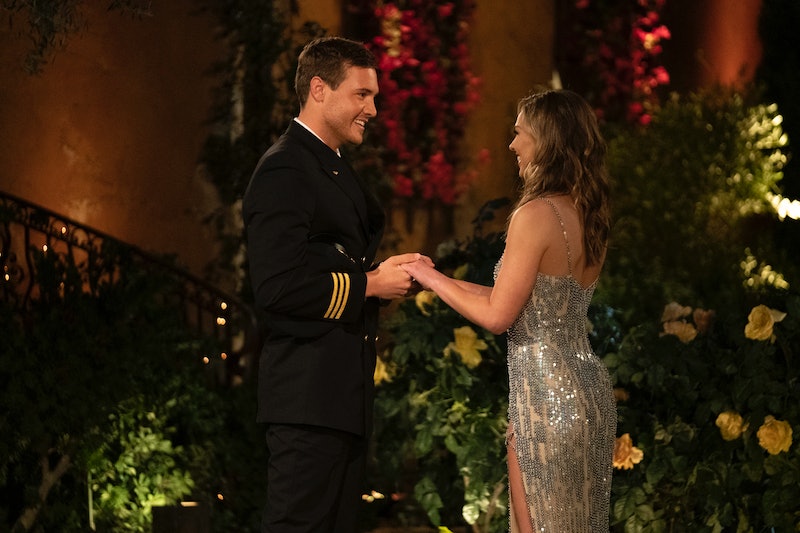 A month after Bachelorette contestant Jed Wyatt's ex claimed he was dating her while on the hit ABC reality series, another one of Hannah's final four men could have some explaining to do. Peter reportedly left his girlfriend for The Bachelorette, according to the pilot's reported ex-girlfriend, Calee Lutes. The model claimed they had a five month relationship, which began via a dating app, in a new interview with Entertainment Tonight on July 15. (Bustle reached out to ABC for comment.)

In an email interview with the outlet, Peter's ex claimed that he abruptly ended their relationship in December to appear on the dating show. Lutes told the outlet that their reported long distance relationship (she hails from Atlanta, he's from the Los Angeles area) began in June 2018, and reportedly included Peter telling her he loved her for the first time in October and a trip as a pair to Switzerland in November. But Lutes claimed that two days before Christmas, and after both parties had met the other's parents, Peter FaceTimed her to tell her that they "should end our relationship before it got even more serious."

Lutes said to ET, "He definitely didn't go on the show for the right reasons. I believe he went on it for the chance at fame, and he got what he wanted."

Peter's ex-girlfriend claimed that she was "devastated and completely blindsided" by the breakup, which Lutes said she believes Peter has referenced while a contestant on the show. During his first one-on-one of The Bachelorette, Peter said his last relationship, which Lutes believes was with her, was "very serious and we felt very deeply for each other," but he claimed that it didn't work out because "it wasn't meant to be." During last week's hometowns episode, Peter's parents also discussed his painful breakup.

Lutes gave the outlet reported texts and photos to support her claims that the two had discussed a substantial future. She also claimed that she found out about Peter's stint on the show "the day he began filming the show," when a simultaneous crop of cast photos was dropped. Before that, Lutes revealed she had some suspicions:

"I didn't understand why it was so urgent to end things so suddenly," Lutes explained. "I thought there was another girl, so I looked at his recent followers on Instagram, and noticed that a Bachelorette producer had recently followed him. I didn't think much of it at the time, but I knew there was something he wasn't telling me. He immediately deleted EVERY trace of me on Instagram. He deleted our pictures… untagged me from photos, deleted my comments from his page and went as far as unliking my photos/deleting his comments from my Instagram as well."

As for those hoping for Peter to be the next Bachelor if he doesn't win Hannah Brown's heart, Lutes isn't exactly supportive of the idea. She claims that he interviewed for the show while planning a future with her, which she believes means he's not on the show for the right reasons. "I know he’s not ready to settle down, so I think it would be a huge mistake if he were to be the Bachelor," she told ET. I hope they choose someone who is truly there for the right reasons."

As Bachelor Nation reels from the latest Peter drama, his chances at becoming the next Bachelor may be stalled on the runway.

More like this
It’s Official: 'The Bachelorette' Is No Longer A Fairy Tale
By Samantha Allen
Logan Might Change His Mind About Dating Rachel On 'The Bachelorette'
By Brad Witter
Former 'Bachelor' Producer Elan Gale Knows The Secret To Your Favorite Shows
By Samantha Rollins
'The Bachelorette’s Johnny Could Be Gabby's Dark Horse This Season
By Kadin Burnett
Get Even More From Bustle — Sign Up For The Newsletter