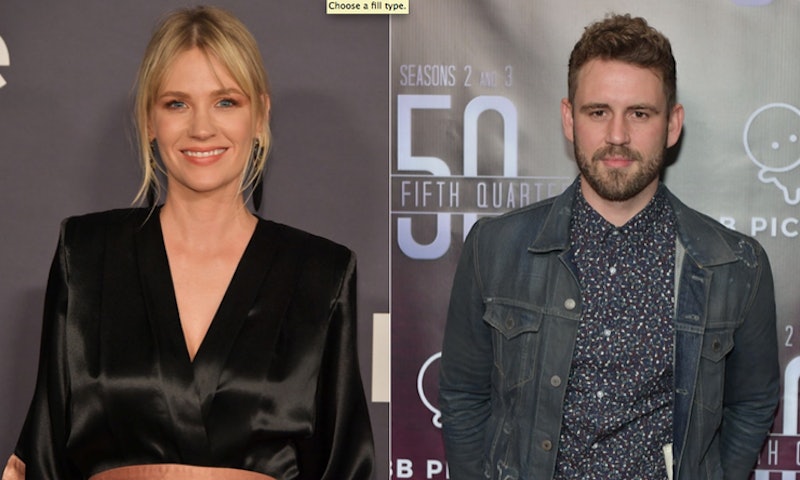 Just a couple of weeks after reports of Nick Viall and January Jones dating surfaced — shocking both Bachelor and Mad Men fans alike — it seems like whatever may or may not have been going on between them is now over. Jones and Viall have broken up, if they were ever dating in the first place, and although there aren't details available about what could have caused their a split, both of them have made it very clear on Instagram that they are single.

Of course, it's only fitting that they've made the end of their reported relationship so transparent on Instagram since that's where some of the earliest clues that they might be together came from in the first place. Over the last couple of months, they've been liking and commenting on each other's posts. Then, Page Six reported that Jones and Viall had connected after she declined his invitation to go on Lip Sync Battle with him, and after getting a drink together later on, they ended up hitting it off and started dating.

Sadly, their love story ultimately was not meant to be, and there is social media proof. Ready for the receipts? Here we go.

Viall himself posted this photo, along with a caption that is very reminiscent of the kind of self-deprecating Instagram posts he used to make as a single dude:

Someone who is dating January Jones, the former Betty Draper and all around magical human being, would not be trying to get anyone else's attention... and he probably wouldn't be going home alone to a frozen pizza, although that part actually sounds like a pretty good night.

And then there's Jones, who — just hours earlier — shared a quote that may or may not actually be attributed to Bob Marley that's about not giving up on someone who isn't "easy," because the right person will be worth it. The quote, which you've probably seen all over Pinterest, says:

Hmm. Sounds like something may have happened that made Viall and Jones realize that their relationship just wasn't going to work... maybe because Jones isn't "easy"? We will (sadly) probably never know the truth about what happened here, but one thing seems to be for sure: These are two very single Instagram posts made by two very single people who may have been dating before but are definitely not dating now, wouldn't you say?

Even though there was never any solid, concrete evidence that they were ever dating — and neither half of the couple ever confirmed it themselves — this turn of events makes it a little more convincing that they may have been together after all. Think about it: Why would these two people both make such similar posts declaring their singleness, one right after the other? They're totally aware about the buzz that's been going around, and they want to set the record straight. Or at least, that's what it seems like, anyway.

Since this reported relationship ended so quickly, it is a little sad that it never progressed to the point where they wanted to go public. How awesome would it have been to see them out together, or even to see them share couple-y photos of themselves together on Instagram? It's truly a shame that things between them fizzled out so quickly, because the pictures would have been wonderful.

Although they would have made a beautiful couple, all good things must come to an end. Certainly, Viall and Jones will eventually find who they're truly meant to be with.