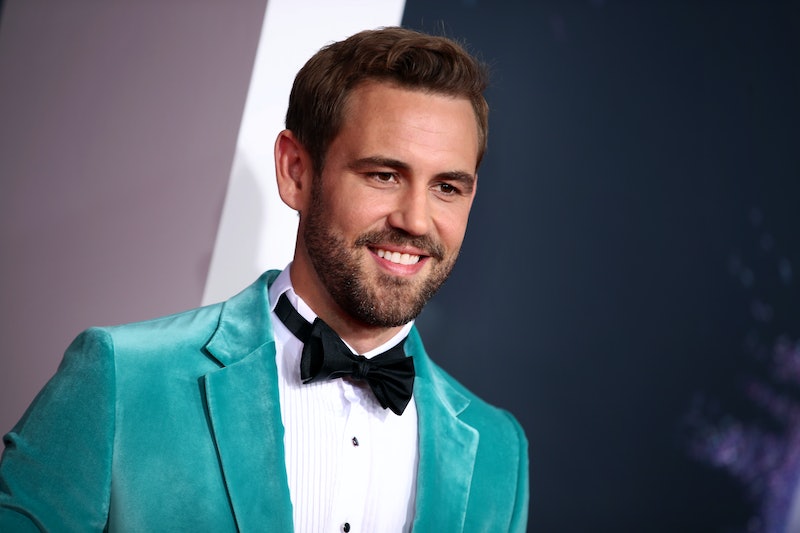 Nick Viall wants the world to know that he's a huge Barry fan and that's not something that's about to change anytime soon, regardless of who the star of the series is dating. Though the former Bachelor star never appeared to interact with them on the red carpet, Viall reacted to Rachel Bilson and Bill Hader's Golden Globes debut as a couple and his response was equal parts hilarious and downright worthy of a rose. It also proves just how powerful the HBO series Barry truly is.

“It makes it easier since I’m such a Barry fan,” Viall commented under The Morning Toast’s Instagram post of Bilson and Hader on the Golden Globes red carpet together. It was the first time the couple attended an event together, thereby making their relationship official to the public. Rumors that the duo were dating began back in November when Bilson and Hader were spotted on a date in Los Angeles and then again in December when they were seen at a Starbucks in Hader’s hometown.

Prior to that, though, reports of a romantic fling between Viall and Bilson made headlines last summer after the Hart of Dixie star appeared on Viall's podcast “Viall Files” and shared some flirty exchanges on Instagram. However, both Bilson and Viall have denied the rumors and claim to be just friends. “We’re just friends. We’ve always just been friends. He’s a really nice guy,” Bilson assured Us Weekly in December. And based on Viall's reaction to her new beau, that certainly seems to be the case.

Meanwhile, Viall had a pretty exciting evening as well, having never attended the Golden Globes himself until Sunday, Jan. 5. He was accompanied by his fellow Bachelor alum Demi Burnett, whom he has become very close to over the past year. Both Viall and Burnett have appeared several times on each other's social media accounts and hung out with one another on numerous occasions. Naturally, this sparked dating rumors between the two of them, though they've both made it clear that nothing romantic is going on.

“I’m not dating Demi,” Viall told Us Weekly back in November. “I’m certainly hoping to settle down when the right person comes. [But] I’m not trying to put pressure on myself.” Viall also addressed their friendship on his podcast after photos of them leaving his Los Angeles apartment were posted on Reddit. "Demi is a close friend. She's a dear friend We've become very close," he clarified. "I care very much about her."

With all that in mind, Viall still appears to be single, but as his recent comments about Bilson and Hader indicate, he's still got his sense of humor. And regardless of who he is or isn't dating, his love for Barry isn't going anywhere.