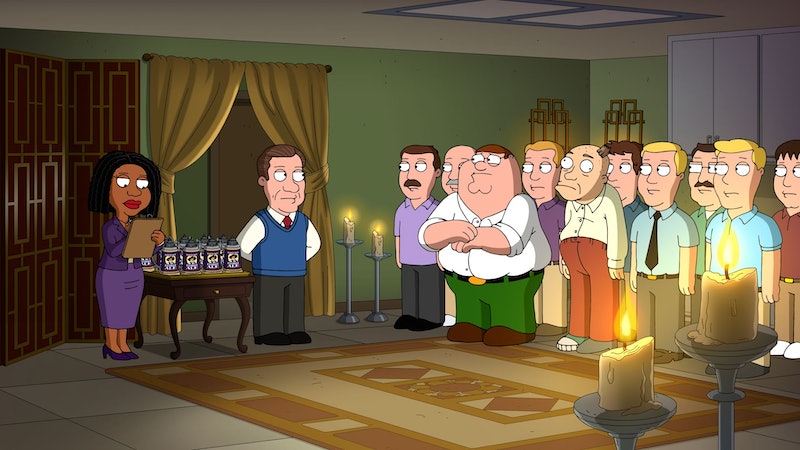 Chris Bukowski may hold the record for the vast number of Bachelor shows he's been on, but he certainly isn't the only one to have a longstanding reputation for popping up numerous times in the franchise. That's what made Nick Viall's Family Guy cameo during Sunday night's Season 18 premiere so hilarious. Because even in the wonderful world of animation, poor Nick can't escape his ties to Bachelor Nation. But hey, when the likes of Peter Griffin calls you stupid on national television, you know you've truly made it into showbiz.

Nick served as the Bachelor during Season 21 after finishing as a runner-up in two consecutive Bachelorette seasons that starred Andi Dorfman and Kaitlyn Bristowe. He then went on to join the cast of Bachelor in Paradise Season 3 and came close to proposing to Jen Saviano, but ultimately decided against it. Shortly afterward, he was announced as the next Bachelor and got engaged to contestant Vanessa Grimaldi during the season finale. Their love story wasn't meant to be, however. The duo broke up the following August before a wedding could take place. And while he has yet to pop up again in Paradise, he still continues to be connected to the reality dating series even to this day.

Many celebrities have appeared on Family Guy in the past, including Rob Lowe, Drew Barrymore, Mila Kunis, Ryan Reynolds, and the late Carrie Fisher, just to name a few. And after this week Nick's name can now be added to that impressive lineup as well. The episode, titled "Yacht Rocky," centered around a very stressed out Peter, who is worried about getting let go from his job due to cutbacks. The company only needs to fire one person and decide that the best way to reveal who that unlucky employee will be is to hand out Pawtucket Patriot Ale steins one-by-one to everyone who gets to stay. It's meant to serve as a direct parallel to a Bachelor rose ceremony, eliminating anyone who doesn't receive a rose by the end of the process.

As the numbers begin to dwindle, Peter notices that one of the guys in the group waiting to receive a stein is none other than Nick Viall. "Bachelor Nick, why are you here?" Peter asked in the scene as the last few steins are about to be handed out. "They make me come to all these things," Nick replied. Peter went on to ask about Vanessa, to which Nick informed him that they broke up. Peter proceeded to admit that he'd murder his entire family just to spend one hour with Corinne, and when Nick remarked that she was a little young, Peter, as always, had the perfect comeback, stating, "You know how stupid you sound?"

All-in-all it was a relatively brief cameo, but it's bound to move Bachelor fans to tears (from all the laughing, of course). Nick may not have found love throughout his many journeys on the series, but as this stint on Family Guy proves, his sense of humor remains intact